We Are Such Stuff as Dreams Are Made On 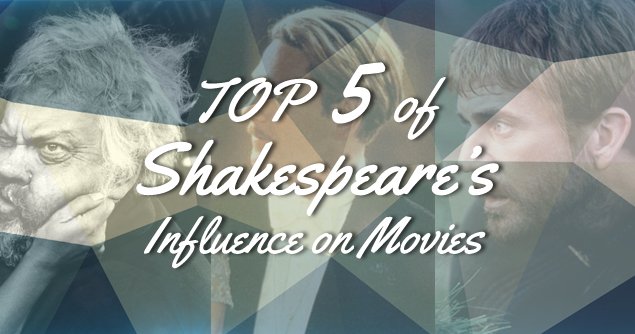 Shakespeare’s Influence on Movies, 400 Years After His Death

To commemorate the 400th anniversary of Playwright William Shakespeare’s death on April 23, 1616, MOVIEGUIDE® offers the following examples of five of the best adaptations of Shakespeare on film.

Shakespeare’s positive influence on Western Civilization and its arts and letters has been tremendous. This is also true of cinema.

As noted below, Shakespeare shared a strong, biblical, Christian value system with others of his day. His plays contain many important references to Scripture. Sadly, that tendency is often lacking in today’s culture, but not totally thanks to the efforts of ministries such as MOVIEGUIDE®.

This list focuses on actual adaptations of Shakespeare’s plays, but readers also may want to watch the 1956 science fiction adventure, FORBIDDEN PLANET, which is an adaptation of the story from Shakespeare’s play THE TEMPEST. The movie is a highly entertaining, exciting, incisive treatise on the ubiquity of the sinfulness of man, which the movie labels “monsters from the id.”

More than 420 feature-length versions of Shakespeare’s plays have been filmed, according to one source.

Mel Gibson is believable and superb as Hamlet in this 1990 adaptation of one of Shakespeare’s best, most renowned plays, adapted and directed by the acclaimed Italian director Franco Zeffirelli. Gibson and Zeffirelli have given us one of the greatest filmed version of one of Shakespeare’s plays. As commentators have noted, William Shakespeare, along with others of his day, shared a strong, biblical, Christian value system (in fact, recent commentators suggest he must have been a Christian after analyzing his writing). Wrongs needed to be righted, and good must triumph over evil. When sin is covered over, the outcome is a tragic one, as we see in HAMLET. How refreshing to understand through a movie like HAMLET that “he that covers his sin shall not prosper,” including that of marital infidelity, and to see God’s justice win out. MOVIEGUIDE highly recommends Zeffirelli’s HAMLET. It is a masterpiece and a must for every student of drama and every person who wants to be really entertained.

The last of Shakespeare’s tetralogy, HENRY V is the story of a young Christian monarch and his loyal troops defying insurmountable odds to defeat the French in a war over lands rightfully belonging to England. Despite early victories, the war-torn English must overcome sickness and low morale before their cause is won. At the climatic battle of Agincourt, King Henry delivers a rousing, patriotic speech urging his troops to fight for “Harry, England and St. George.” In the ensuing battle, the British miraculously defeat the French, despite being outnumbered five to one.

The movie focuses on the Christian qualities of the King, who gives God all the credit for his victories. Miraculous things happen when God is the motive for your efforts. This movie examines the young king’s personal growth when he is prematurely forced to preside over a nation. Henry’s character development is important to the tetralogy, as it represents the resolution of controversy dealt within the first three historical plays by Shakespeare. Solid performances, detailed costuming and beautiful set direction make this movie a visual treat for almost everyone. Overall, this is an uplifting picture in which good conquers evil, exhibiting mercy in the process.

Laurence Olivier’s engaging rendition of Shakespeare’s play is a patriotic affair shot in beautiful Technicolor during World War II. It starts with a raucous performance of HENRY V at the Globe Theater and moves on to a realistic portrayal of the Battle of Agincourt, a portrayal that’s had many, many imitators since then, including some modern fantasy movies. If it seems a little old fashioned at times, it’s good to remember that Olivier’s vision mesmerized audiences back in 1944, and even achieved an iconic appeal in France in the 1950s with French movie critic Andre Bazin, who thought Olivier’s seemingly contradictory directing choices in HENRY V, the perfect way to render a theatrical play on movie.

Directed by and starring Orson Welles, this third look at Shakespeare’s Henry V, known here as Prince Hal, before Hal became king, is actually about Falstaff, Prince Hal’s overweight drinking companion. The movie’s dialogue is taken from five of Shakespeare’s plays where Falstaff makes an appearance:  HENRY IV, PART 1; HENRY IV, PART 2; HENRY V; RICHARD II; and, THE MERRY WIVES OF WINDSOR. Though the sound quality is often poor because of its limited budget, the movie is nevertheless a thoroughly unique and captivating adaptation of Shakespeare. Welles was, if anything, a Shakespearean artist. Most of his movies are, in fact, Shakespearean tragedies, even the ones where the story and plot have nothing to do with the Bard of Avon’s plays. The Shakespearean tragedy that takes place in the final scenes of CHIMES AT MIDNIGHT contains one of the most heartbreakingly filmed endings in any movie based on one, or more, of Shakespeare’s plays. The movie contains some references to prostitutes, so caution is advised.

In LOVE’S LABOUR’S LOST, Kenneth Branagh transforms one of Shakespeare’s romantic comedies, about a king and his four lovesick friends wooing four ladies, into an old-fashioned movie musical. Despite some brief lewd content in a couple scenes that warrant caution, LOVE’S LABOUR’S LOST has a light moral worldview with some positive references to God and Heaven. The idea to add some songs by Cole Porter, Gershwin and Irving Berlin to a Shakespeare comedy is not as crazy as it sounds. In fact, it actually turns out to be quite delightful. Shakespeare’s dialogue leads seamlessly into the song lyrics, implying that Shakespeare and some of America’s greatest composers are virtually saying the same thing.

Note:  Other notable Shakespearean adaptations on film include Laurence Olivier’s HAMLET and RICHARD III, Orson Welles’ OTHELLO, Akira Kurosawa’s RAN (based on KING LEAR) and THRONE OF BLOOD (based on MACBETH), Franco Zeffirelli’s ROMEO & JULIET, William Dieterle and Max Reinhardt’s A MIDSUMMER NIGHT’S DREAM, Kenneth Branagh’s MUCH ADO ABOUT NOTHING and HAMLET, Roman Polanski’s MACBETH, and Robert Wise’s adaptation of Jerome Robbins’ WEST SIDE STORY, based on ROMEO & JULIET.