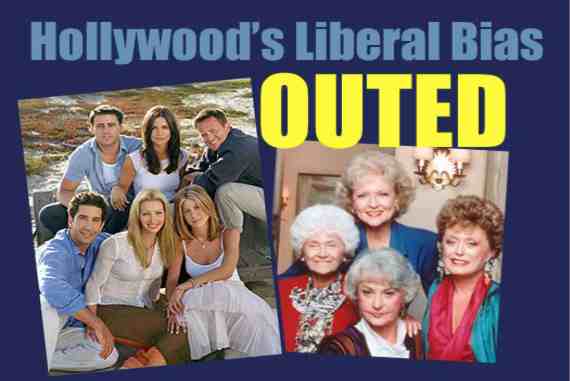 While this news is the worst keep secret on the planet earth, public confession of it is not all that common. The Hollywood Reporter article announces the release of a new book called Primetime Propaganda by Ben Shapiro. Shapiro taped interviews with a number of prominent television executives and producers regarding the liberal slant of Hollywood. Videos with their remarks on tape are available here.

Susan Harris, creator of SOAP and THE GOLDEN GIRLS is quoted saying Conservatives are “idiots” with “medieval minds” and, “At least, you know, we put Obama in office, and so people, I think, are getting – have gotten – a little bit smarter.”

FRIENDS co-creator Marta Kauffman said that casting Candice Gingrich-Jones as a minister who marries two lesbians was a “f— you to the right wing.” She particularly liked the minister’s line “Nothing makes God happier than when to people, any two people, come together in love.” This was followed in the scene by the Phoebe character (Lisa Kudrow) saying, “Oh my God, now I’ve seen everything.”

In the Hollywood Reporter article Shapiro says, “My whole book is a plea for openness in the industry.”