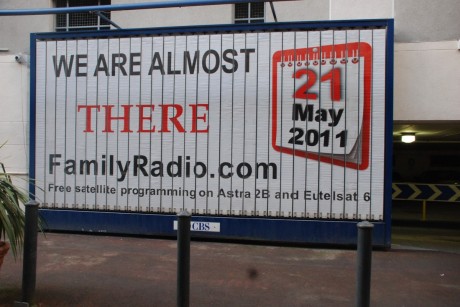 Once again, “end-of-the-world” ranting and ravings are parading across our paths. Harold Camping, president of the Family Radio Network, is the latest “prophet” of this ultimate doom. And all humankind, throughout the ages, has paid and is paying a horrendous price for our multi-centuries-old trail of false and failed predictions.

Not surprising, the media has gone “gaga,” so-to-speak, over his latest failed prediction of May 21, 2011. The Hollywood Reporter’s May 25th issue (p-7) in an article titled, “Rapture Frenzy: No Signs of Ending” by Paul Bond, reported “an astonishing amount of media attention . . . . his prognostications generated at least 27,000 news articles and was fodder for TV comics and radio talk show hosts for weeks.”   Some, if not many no doubt, were motivated by this opportunity to further mock and discredit Christianity.

But Camping hasn’t given up. He has recalculated and reset his date to be October 21, 2011. Expect the media to pounce on this date, as well. When it fails, and it will, we still have the December 21, 2012 date to worry about—based on calculations from the Mayan calendar. If you are unaware of this predicted and soon-coming apocalypse, rent the movie—appropriately titled, 2012.

Nonetheless, many today are wondering if one of these dates, or “our time,” could really be it? And the biblical and historical answer, as we shall soon see, is, “No!

What Could Be Worse?

What’s worse than Camping’s end-saying antics, in this writer’s opinion, is the weak, anemic, and unscriptural response of supposedly “more responsible” Christian leaders to Camping’s fiasco. All that many of them can meekly and merely claim is that we cannot know when the end proclaimed through the Bible will occur.  For proof, they cite Jesus’ statement that “No one knows about that day or hour, not even the angles in heaven, nor the Son, but only the Father” (Matt. 24:36). They then extrapolate Jesus’ words to mean that no one can ever know the time at all.

Not only is this unknowable response greatly ineffective, it is also major scriptural error for these three reasons:

Fact is, the only antidote for all “end-of-the-world” ranting and ravings is the realization of these two historically defensible and biblical truths:

1).  Our world is without end. This truth is contained within the biblical phrase “from the beginning of the world . . . . throughout all ages, world without end, Amen” (Eph. 3:9, 21 KJV, and many more). This verse is the source of the well-known doxology of the church, the Gloria Patri:

As it was in the beginning is now and ever shall be.

2).  The end for the world came right on time.  It’s past and not future; its “last days” are behind us, and not present or ahead of us. Another fact is: the God of divine perfection and mathematical precision in creation of the physical earth and universe (macro and micro) is the same God of divine perfection and mathematical precision in the creation and fulfillment of his plan of redemption. And his goal or end for the world is consistently proclaimed throughout the Bible. (The Greek word often used here is telos and means either a goal or a termination. In this case it means both. See Matt. 24:14.)

This end came right on time. It occurred within the “this generation” just as Jesus specified numerous times and in varying ways, and exactly as and when every New Testament writer and the early church expected (Matt. 24:3, 34; Luke 21:32; Mark 13:30). No gaps, no delays, no interruption of time frames, and no strained explanations are needed. All was fulfilled precisely, sequentially, and chronologically within human history and as prophesied centuries in advance. It wasn’t the end of the cosmos. It was the end of the Jewish world and its age (1 Cor. 7:29, 31; Heb. 8:13; 9:8-10; 1 Pet. 4:7, 17, and many more).

This end’s precise past-fulfillment is both well-grounded scripturally and deeply rooted in documented history. Truly, this is The Perfect Ending for the World and great good news—socially, culturally, politically, environmentally, and theologically. It’s also the ultimate apologetic (defense) for the existence of God, the climax of the rest of the greatest story ever foretold, and the basis for the next reformation of Christianity.

Truly, this great good news for the world is the only antidote to the long, sad, and tragic tradition of saying the “end of the world” is near. All other explanations simply fall far short and are bad news.

For More about This Only Antidote

To discover more about why all modern-day, end-saying prophets of ultimate doom have been and will always be wrong, check out my [this writer’s] new book, The Perfect Ending for the World. It’s available only on Amazon.com. Get your copy before it’s too late! Just kidding.

John Noe is president of the Prophecy Reformation Institute (www.prophecyrefi.org) and publisher of East2West Press (east2westpress).