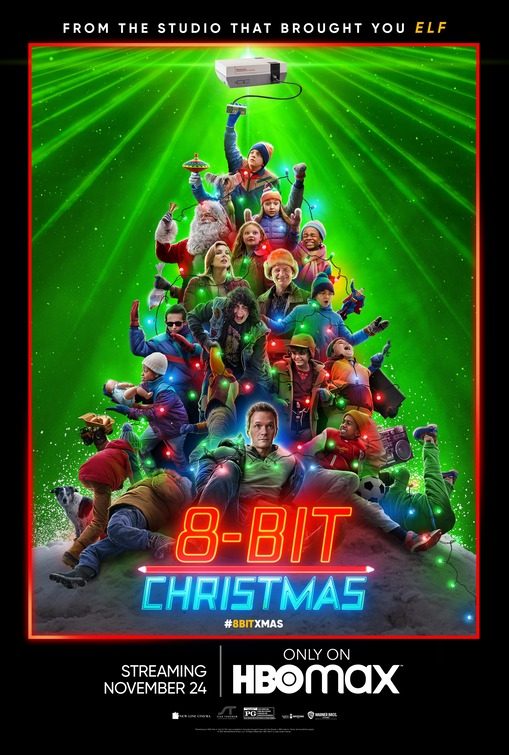 8-BIT CHRISTMAS is a family comedy on HBO Max about a father, Jack, who tells his daughter, Annie, how he came to get a Nintendo in his youth while they wait on family to arrive for Christmas. Jake’s story is filled with many exciting twists and turns that ultimately keep Annie engaged. He also demonstrates the value of working hard and not becoming too hooked by the latest digital gadgets of the day.

8-BIT CHRISTMAS is funny, heartfelt and well-cast. It has a strong moral, capitalist worldview stressing the value of family and hard work. There’s a scene with depicted prayer around a dinner table, and a mother wears a cross around her neck. The movie also contains references to Christmas, but no references to the birth of Jesus. It also contains two anti-communist comments, but one politically correct comment about people being “closed minded” about current social trends. 8-BIT CHRISTMAS provides a great lesson about technology’s effects on children and argues for media wisdom. However, MOVIEGUIDE® still advises caution for older children for some potty humor, gratuitous foul language and slapstick violence.

(BB, CapCap, C, AC, PC, LL, V, A, M):
Dominant Worldview and Other Worldview Content/Elements:
Strong moral, capitalist worldview with some light Christian content stresses the value of family and hard work, characters are reminded that family matters, characters learn to use discernment when using media like video games (father instructs daughter not to become too hooked by the latest digital gadgets of the day), a dinner prayer occurs, mother wears crucifix around her neck, and there are references to Christmas but no references to the Nativity, plus there are two anti-communist comments connected to the late 1980s, but there’s a politically correct comment about people being “closed minded” about fashion and other cultural trends in the 1980s
Foul Language:
10 profanities and three obscenities include two Jesus profanities, one GD profanity, one swear to God, another G said under a character’s breath, two “God bless it” profanities, one “Mary Mother of God” profanity, two ither G profanities, children find a baseball card with the F-word on it, but the cameras blur it out, one “d” word, two “h” words, people are told to shut up twice, depicted dog feces, depicted vomiting, and a mention of diarrhea
Violence:
Some slapstick violence includes man falls on ice, children play “King of the Hill” at school and fall, children play some video games with shooting and fighting, father pushes guests at a mall to find his son and throws a Christmas elf off an escalator after punching him
Sex:
No sex scenes or sexual immorality, but a married couple kisses, and a teacher comically jokes to herself that she should have stayed a dancer in Las Vegas
Nudity:
No nudity
Alcohol Use:
Father character mentions a bar at the mall, and adults have wine at dinner
Smoking and/or Drug Use and Abuse:
No smoking or drugs, but a father and son do go to see a toy dealer under a bridge to secure Christmas presents they can’t find in the mall; and,
Miscellaneous Immorality:
Boy jokes he wishes he had a “nudie mag” so he wouldn’t get beaten up, other light name-calling, and some comical bribery.

In 8-BIT CHRISTMAS, Annie Doyle and her father, Jake Doyle, await Jake’s mother for the Christmas holiday at her house in the Chicago suburbs. Annie desperately wants to text her friends on her father’s phone, since Jake won’t allow her to have her own cell phone. However, it turns out there’s a cool piece of equipment they can use to pass the time waiting instead, a Nintendo.

To Annie, the machine looks ancient, but to Jake, it brings back memories from his childhood. The remainder of the movie gets told in flashbacks where Jake is 11-years-old and grown-up Jake is the narrator.

In 1988, Jake and his crew of friends didn’t have their own Nintendos. Instead, they had to go Timmy Keane’s house, who made children on the block bribe their way into playing with his Nintendo. One day, though, while Jake and his pals are at Timmy’s, the TV falls on Timmy’s dog, injuring it badly.

Meanwhile, there’s a rumor that circulates to Jake and his friends. Apparently, the Loyal Rangers Troop in the area will gift a Nintendo to whoever sells the most Christmas wreaths! At last, now Jake has a shot of getting one. To win the Nintendo. Jake’s sister, Lizzy, says he should try selling wreaths at home for senior citizens.

However, little do Jake and his friends know that Timmy Keane’s parents held a PTA meeting at their school talking about how video games caused their dog to break three of its four legs and promote violence. Now, there’s a movement in the area to stop video games.

How will Jake ever get a Nintendo for Christmas now?

8-BIT CHRISTMAS is funny and well-cast. Filmmakers make slow-motion shots comical as well as fit the movie’s narrative too. There’s also a good amount of “aww worthy” content for viewers who remember pop culture references from the 1980s. Jake’s story is filled with many exciting twists and turns that ultimately keep Annie engaged and demonstrate the value of working hard and not becoming too hooked by the latest digital gadgets of the day. Finally, the movie’s length is just right.

8-BIT CHRISTMAS has a strong moral, capitalist worldview. It stresses the value of family and hard work. Characters are driven by their desire for material possessions, but along the way they learn that memories and family matter more. There’s a scene with depicted prayer around a dinner table, and a mother wears a cross around her neck. However, the movie doesn’t talk about Christ’s birth. The dialogue includes two anti-communist comments typical of the late 1980s, plus one politically correct comment about people being “closed minded” about fashion and other trends in that decade.

8-BIT CHRISTMAS demonstrates a great lesson that technology does have an impact on children and to use discernment with its use. The protagonist eventually learns this and teaches it to his daughter too. For all its positive elements, MOVIEGUIDE® still advises caution for older children because of some foul language, potty humor and slapstick violence.