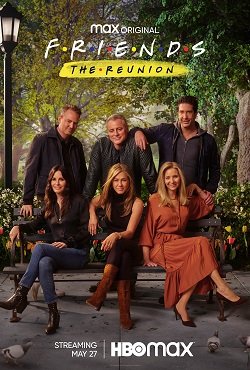 FRIENDS: THE REUNION is a TV special streaming on HBO MAX. A lit set on the Warner Bros. lot illuminates the old set from the FRIENDS television series on a day like any other. Except, that the program’s six mega-famous stars will reunite on camera, 17 years after shooting the finale. The documentary then dives into many sequences that juxtapose the cast with one another, showrunners talking about the program’s genesis, audience questions, and interviews of celebrities who express their love for the series. The cast answers several long-standing questions, especially about Ross and Rachel’s roller coaster relationship.

FRIENDS: THE REUNION is lively and engaging, with high production values. It has a light moral worldview stressing friendship and loyalty. However, one woman makes a humanist, feminist comment about taking control of one’s life as a woman. Also, there few fans and one series showrunner mention their homosexual lifestyle. Finally, FRIENDS: THE REUNION has lots of foul language during the discussion about the series and some references to the sexual immorality on the program. So, MOVIEGUIDE® advises extreme caution for media-wise viewers.

(B, Fe, H, Ho, C, LLL, V, S, N, A, D, M):
Dominant Worldview and Other Worldview Content/Elements:
Light moral worldview about friendship and loyalty, with a producer saying she has a rabbi, marred by humanist and feminist comments about taking control of one’s life as a woman, homosexual man and a lesbian couple stress how much the FRIENDS series on TV impacted their lives, and a gospel choir sings a song that was popular on FRIENDS, but the song it doesn’t have any religious significance
Foul Language:
14 obscenities (mainly “s” words), 32 mostly light profanities (many OMGs and two Jesus profanities), some “f” words are bleeped out, and a joke about urination
Violence:
Actor recounts a story where he puts his head on a toilet seat
Sex:
Implied fornication and mention of erotic female zones on the body in FRIENDS episodes, dating couples kiss on the mouth
Nudity:
Mention of “going commando” in an episode of FRIENDS, upper male nudity and implied full female nudity in some scenes from TV series
Alcohol Use:
Wine in a FRIENDS episode, champagne in a bathtub, mention of drinking beer celebratorily
Smoking and/or Drug Use and Abuse:
Man has a cigarette in his mouth in a photo, but there are no drugs; and,
Miscellaneous Immorality:
Nothing else objectionable.

HBO Max’s FRIENDS: THE REUNION is a sentimental look back at the fan-favorite sitcom, with the stars from the series and artists behind the scenes discussing the program and its popularity. FRIENDS: THE REUNION is a lively, engaging and well produced TV special, with a light moral worldview stressing friendship and loyalty, but it also has some references to premarital sex, several people who mention their homosexual lifestyle and lots of foul language.

A lit set on the Warner Bros lot illuminates the FRIENDS set on a day like any other, except for the fact that the program’s six mega-famous stars will reunite on camera after 17 years since the series finale. David Schwimmer (Ross), Lisa Kudrow (Phoebe), Jennifer Aniston (Rachel), Matt LeBlanc (Joey), Courtney Cox (Monica), and Matthew Perry (Chandler) walk on set to greet one another with all their emotions on display.

Cut to THE LATE LATE SHOW host, James Corden. The British host gathers a room filled with FRIENDS fans of the introduction of all the cast members, just before they sit on the iconic couch from the series’ theme song montage.

The documentary then dives into many sequences that juxtapose the cast on set with one another, showrunners talking about the genesis of the show, and then audience questions and several fun talking head interviews of celebrities who express their love for the series too! Oh, and the cast also answers some long-standing, pulsing questions, like were Ross and Rachel really taking a break from each other when Rachel caught Ross kissing another girl?

FRIENDS: THE REUNION is lively and engaging. Also, the production quality is top notch and slightly self-reflexive since the viewer is made aware that the TV special is being filmed on a studio lot. That said, only true FRIENDS fans will appreciate this 104-minute look back. People unfamiliar with the program may find it hard to connect to the stories and the zeal that fans have for the series.

FRIENDS: THE REUNION has a light moral worldview stressing friendship and loyalty. However, in one woman’s interview about the show, she makes humanist and feminist comment about taking control of one’s life as a woman. Similarly, there are a few homosexual fans and one show-runner who mention their sexuality. Happily, the program bleeps out some “f” bombs, but it has lots of strong and light foul language otherwise. So, MOVIEGUIDE® urges extreme caution for media-wise viewers.