"Quite Literally, in a Pickle" 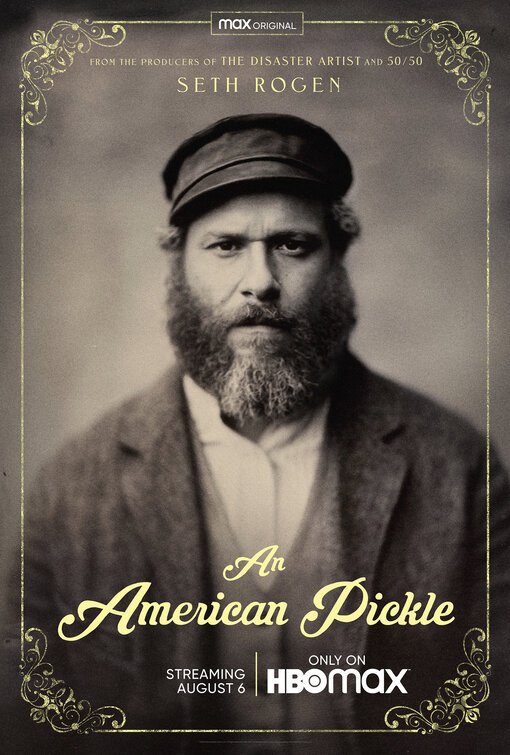 An HBO Max original move, AN AMERICAN PICKLE follows Herschel Greenbaum, a Jewish ditch digger in Poland who emigrates to new York City with his wife Sarah. Herschel begins working at a pickle factory. One day, Herschel falls in a vat of pickles and is left in the brine. One hundred years later, Herschel is found perfectly preserved. Now in modern-day Brooklyn, Herschel connects with his only living relative, his great-grandson, Ben. The two men try to bridge the gap between them while learning about the meaning of family.

AN AMERICAN PICKLE is an interesting concept, but falls short on the comedy. It has a strong moral worldview that focuses on family in all senses, such as being there for one another, honoring them, defending them, and wanting to make them proud. It also talks about family being more important than what you do to make a living. Some Jewish traditions are also seen. However, AN AMERICAN PICKLE contains some foul language, environmentalist elements, an Anti-Christian comment about Jesus and His mother, and a few homosexual references. So, MOVIEGUIDE® advises extreme caution.

(BB, EE, PC, Ab, Ho, LL, VV, S, A, MM):
Dominant Worldview and Other Worldview Content/Elements:
Strong moral worldview of wanting to honor your family and make them proud through what you do, including a comment about family being more important than your business and always defending your family, Jewish elements of the Kaddish prayer recited multiple times, a Jewish wedding ceremony occurs, and new life is seen as a miracle, with some environmentalist elements, such as making an app that can tell if a company is ethically sourcing its products to reduce carbon footprint and make less waste, and one character makes pickles and insists on people bringing the jars back after use so he could reuse them, some politically correct element of gender roles and comments about women, and how they make food from their bodies and have babies, an Anti-Christian comment is made about Jesus’ mother being a prostitute, and if you believe in Jesus you’re a stupid idiot, and there’s an implied homosexual couple and comments are made about homosexuals participating in things that are against God and likened to Sodom and Gomorrah
Foul Language:
10 obscenities, two profanities (OMGs), light name-calling, racial slurs against different ethnic and religious groups
Violence:
Strong and light violence includes a group of people attack another group and blood is seen, man smashes rats to keep them out of a pickle factory, a fist fight occurs, one man punches another man in the face multiple times, and a character is chased by people as they throw things at him
Sex:
Implied sexual intercourse between married couple as the wife becomes pregnant
Nudity:
No nudity
Alcohol Use:
Alcohol seen in a few scenes, but isn’t consumed, a vodka billboard is seen and eventually taken down, beer seen
Smoking and/or Drug Use and Abuse:
No smoking or drugs; and,
Miscellaneous Immorality:
Racism, lying, envy, sabotage, revenge, and unintentional deceit.

AN AMERICAN PICKLE follows a Jewish man who was preserved in pickle brine for 100 years and wakes up in modern-day Brooklyn. An original movie streaming on HBO Max, AN AMERICAN PICKLE has a pro-family theme but falls short comically and contains some foul language, environmentalist elements, an Anti-Christian comment about Jesus and His mother, and a few homosexual references.

One day at the market in 1919 at a Jewish village in Poland, Herschel Greenbaum, a ditch-digger, sees a woman named Sarah and knows he has to marry her. Herschel does everything he can to impress her, and they end up getting married in a Jewish wedding ceremony. Herschel and Sarah talk about their dreams – Herschel wants to one day drink seltzer water while Sarah wants a burial plot for her family.

When the Cossacks attack Herschel and Sarah’s town, it seems like they’re the only ones to make it out alive. They emigrate to New York City, where Herschel gets a job at a pickle factory. Herschel works hard to save money and is able to make Sarah’s dream come true by buying the family a burial lot. Soon after, Herschel and Sarah find out they’re expecting a child, which they call a miracle.

One day while at work, Herschel falls in a vat of pickles, and no one seems to hear it happen. The workers put a lid on it, and the factory closes its doors forever. Cut to 100 years in the future. Two young boys wander into the abandoned factory when they accidentally fly their drone inside. They open up the vat of pickles, and Herschel awakens, perfectly preserved.

Now alive in modern-day Brooklyn, Herschel learns his whole family has passed, except for his great-grandson, Ben. Ben comes to pick Herschel up from the science lab where he’s being monitored to take him to his home. The following day, Ben takes Herschel to the family burial plot, that’s now overgrown, under a highway with a vodka billboard overtop it.

Herschel is dedicated to do whatever it takes to bring honor back to his family and wants Ben’s help. However, it seems to Herschel that Ben isn’t sold on wanting to bring honor to their family, and that he’s only concerned about his own business ventures.

AN AMERICAN PICKLE is an interesting concept, but falls short on the comedy. The only two real characters are both played by Seth Rogan. Although Rogan does a good job playing both roles, it’s kind of a lot of Rogan for one movie. Also, the idea of someone being perfectly preserved for 100 years in pickle brine is too far-fetched and doesn’t add to the movie’s comic relief.

AN AMERICAN PICKLE has a strong moral worldview that focuses on family – being there for one another, honoring them, defending them, and wanting to make them proud. It all talks about family being more important than what you do to make a living. Also, the main characters are Jewish, so some Jewish traditions are also seen. However, AN AMERICAN PICKLE contains some foul language, environmentalist elements, an Anti-Christian comment about Jesus and His mother, and a few homosexual references. So, MOVIEGUIDE® advises extreme caution.