THOSE WHO WISH ME DEAD

"Intense and Well-Made, But Obscenity Laden" 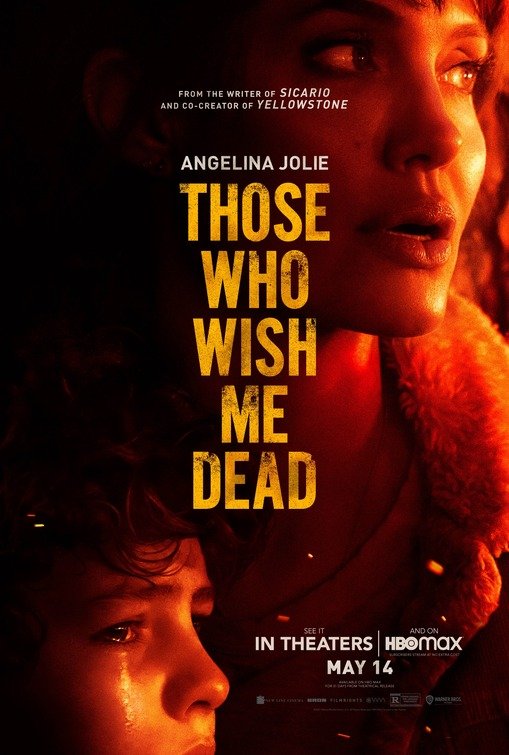 THOSE WHO WISH ME DEAD stars Angelina Jolie as Hannah, a firefighting smoke jumper in Montana who’s haunted by not being able to save three teenage boys during a wildfire. Meanwhile, two assassins in Florida kill a district attorney who’s uncovered high-level corruption among major politicians. They go after the forensic accountant in the case, who flees to Montana with his son, Connor. After killing the father, the assassins go after Connor, who escaped. Ultimately, it’s up to Hannah to save Connor from the two assassins and from a huge wildfire they started to distract the authorities.

THOSE WHO WISH ME DEAD is intense and exciting, with strong performances. It also has some powerful, stirring, emotional dramatic moments. Despite its morally uplifting moments, however, the movie lacks positive references to God or faith. Also, when the assassins shoot three people, the movie shows the impact of the bullets in a graphic manner. Worse, the movie’s filled with gratuitous, annoying “f” words. Hannah even teaches Calvin a tongue twister using some “f” words. So, MOVIEGUIDE® advises extreme caution for THOSE WHO WISH ME DEAD.

(B, Pa, AC, LLL, VVV, S, A, M):
Dominant Worldview and Other Worldview Content/Elements:
Light moral worldview marred by heavy, pagan use of foul language, including many “f” words by the “good guys,” plus plot revolves around a man being hunted by assassins because he was working with a DA to expose big government corruption
Foul Language:
About 94 obscenities, six strong profanities, three light profanities
Violence:
Very strong violence when a character is shot in the head, when a stopped female motorist is shot near the head, and when a man is shot multiple times by two assassins, plus lots of strong violence such as man standing in a road and sniper from a nearby ridge fire at a man driving a car with his son as a passenger and the man is wounded in the arm and shoulder, man drives into car which hits the gunman standing in the road, car tumbles down a slope part way and stops, boy gets out of car and hides, assassins pump multiple bullets into the driver as he tries to drive away (bullets tear through him; see above), woman’s foot partially struck by lightning (it turns the bottom of her foot black and makes her fall), woman falls off a rope and falls to the ground on her back, some facial wounds are shown, man is burnt my fire and side of his face shows red burn marks, assassins fire at three people in a high watch tower in a forest, assassins commit arson in a forest with road flares, and it becomes a raging wildfire later, assassins fight and subdue and threaten a pregnant woman, but she turns the tables on them and seems to escape but may have been hit by a bullet from their guns, woman and boy jump into small river to escape raging wildfire, house explodes
Sex:
No sex, but a few “f” word have sexual connotations
Nudity:
No nudity but woman seen in bra when she changes blouses
Alcohol Use:
Beer drinking outside in one scene and beer drinking in a brief bar scene
Smoking and/or Drug Use and Abuse:
No smoking or drugs; and,
Miscellaneous Immorality:
Politicians send assassins after a DA and a whistleblowing forensic accountant.

THOSE WHO WISH ME DEAD stars Angelina Jolie as a fire ranger in Montana who must protect a traumatized 12-year-old boy running from the two hired assassins who murdered his father because he uncovered some high-level fiscal corruption among major state and federal politicians. Rated R for pervasive foul language and strong violence, THOSE WHO WISH ME DEAD is an intense, exciting thriller with stirring dramatic moments, but it’s heavily marred by many gratuitous, annoying “f” words that diminish the joy that any discerning, media-wise viewer might find watching it.

Angelina Jolie plays Hannah, a smoke jumper in Montana. Hannah can sling the “f” words as well as her male cohorts dressed in the smoking jumping unit who help fight the massive wildfires that sometimes trouble that beautiful state. However, during the last wildfire season, she was leading a unit that misjudged the wind and got cut off from three teenage boys that desperately needed saving. She and her men had to watch as the three boys burned to death. Of course, Hannah was traumatized by the incident. The movie opens with her having a nightmare about it one night.

The next morning, Hannah attends an outdoor orientation meeting with new smoke jumper recruits. Hannah and the male veterans in her unit exchange some lewd banter. One of her buddies in the unit is upset that this summer Hannah’s been assigned to keep watch in one of the high towers in the forest instead of being on the front lines. Her bosses ordered Hannah to have a psych evaluation only three days after the bad experience with the three dead teenagers. Hannah doesn’t seem as upset about the new assignment, however, perhaps because she knows she’s still having nightmares about the incident.

Cut to Fort Lauderdale, Florida. Two assassins posing as gas company men murder a local District Attorney and his family, because the DA had uncovered some high-level fiscal corruption among major state and federal politicians. They head for Jacksonville, where the forensic accountant working for the DA lives. However, instead of sending two separate assassination teams to hit both targets simultaneously, the bad guys decided to save money and only send one team with two assassins. So, by the time the two assassins reach the forensic accountant, he already heard the news about the DA on TV. So, the widowed accountant, Owen, and his son, Connor, left for Montana, to hide from the assassins with Owen’s brother, Ethan, a sheriff’s deputy, and his pregnant wife, Allison.

However, the assassins have seen a photo of Owen and Connor with Ethan and his wife at a survival camp they attended in Montana. The photo shows them all standing next to the sign announcing the camp’s entrance. Consequently, the assassins are able to track Owen and his car as they drive into Montana.

[SOME SPOILERS FOLLOW] The assassins set up an ambush for Owen and Connor on a two-lane road leading to the camp area’s location. The older assassin, Jack, pretends to be fixing a tire while the younger one, Patrick, hides on the ridge next to the road to use a sniper’s rifle. During the ambush, Owen is wounded only, however, and he crashes the car through a guardrail after hitting Jack’s vehicle, stopped by the side of the road, which hits Jack. Jack takes a moment to recover. Before he and Patrick reach the other side of the road to look down where Owen’s car crashed through the guardrail, Owen quickly hands Connor a note to give to a TV news outlet and tells Connor to hide under a fallen tree 20 feet or so away. “Creeks lead to rivers, and rivers lead to towns,” he tells Connor. Owen tries to start the car and drive away, but the assassins pummel Owen and the car with bullets, killing him. The car keeps going down the hill and crashes end over end.

Just after this happens, a woman drives up and asks Jack if everything’s alright, but he shoots her dead. Jack and Patrick decide they better take off before someone else comes along. Connor runs to a nearby creek and starts following it.

With approval from their boss (played by Tyler Perry), the assassins, Jack and Patrick, decide to divert the authorities by starting a forest fire with the flares in the trunk of their car. They eventually make it to Ethan’s house. They pretend to be FBI agents, but Allison’s not fooled. She tries to fight them off, but they get the best of her. They force her to tell them about Connor. She tells them he’s not there. So, they force her to call Ethan and ask him about Connor. However, she gives Ethan a code word for trouble. Jack, the older assassin, gets upset and pulls the phone away from her, but she turns the tables on him and the other assassin, Patrick. Another struggle ensues, and Allison manages to set Jack on fire, get a rifle and then runs away. Patrick assassin fires after her as she runs away, then helps his companion. They look outside but find no blood trail, so they don’t know whether the gunfire hit Allison or not.

Jack and Patrick lie in wait for Ethan to show. When he does, he’s with the sheriff, but the assassins shoot the sheriff in the head and order Ethan to surrender, or they’ll have another man who’s got his wife to kill her and the baby. Ethan accepts this lie and surrenders. They then force him to help them track Connor from the point where they killed Connor’s father.

Eventually, Connor reaches the watch tower where Hannah’s staying. She realizes the boy has been traumatized by something, but he’s reluctant to talk. However, she coaxes the story out of him, and he gives her the two-page note his father wrote to the news media. They pack up and leave the tower, but the raging forest fire started by the two assassins blocks their path.

Will Hannah, Connor and Ethan survive? Did Ethan’s wife, Allison, survive? What’s going to happen next?

THOSE WHO WISH ME DEAD is intense and exciting. The fire scenes in the movie are amazing. It also has some powerful, stirring, emotional dramatic moments. The cast does a really good job with the material. The scenes between Connor and his father are especially good. These scenes help viewers sympathize with them and their plight. However, despite this and other strong, morally uplifting moments, the movie lacks any positive references to God or faith. Also, when the assassins shoot a young woman and a police officer in two separate scenes, the movie shows the impact of the bullets in a graphic, slightly excessive manner. Worse, the movie’s filled with many gratuitous, annoying “f” words. In fact, in one lighter scene, Hannah even teaches Calvin a tongue twister that uses some “f” words. There’s literally no excuse for all this foul language. It actually diminishes the joy of watching Angelina Jolie playing another heroic character in a movie. Also, it will certainly annoy any media-wise viewer who might catch the movie. So, MOVIEGUIDE® advises extreme caution for THOSE WHO WISH ME DEAD.