"Family Is Greater Than Basketball" 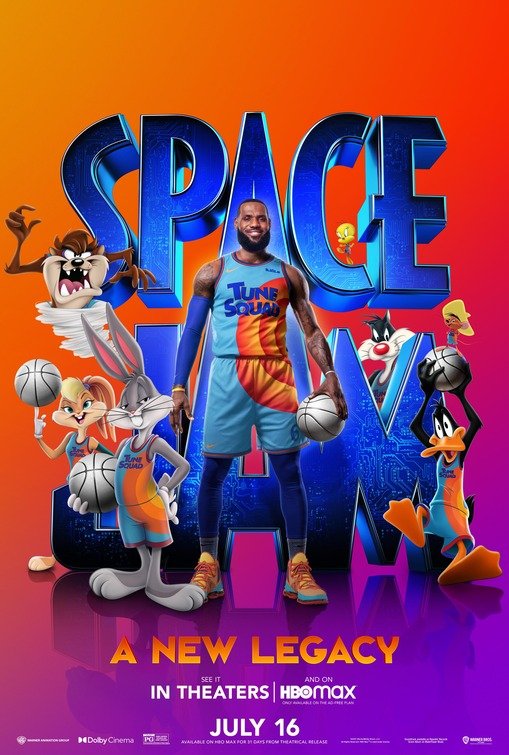 SPACE JAM:  A NEW LEGACY focuses on NBA legend LeBron James and his son, Dom, who unlike LeBron, is not interested in athletics, but technology. When LeBron takes Dom to hear about a new movie deal with Warner Bros., Dom gets sucked into the “Serververse” where a villain wants revenge on LeBron for disliking his idea. To save Dom, LeBron must play a basketball game with a team capable of helping him win. Enter the Looney Tunes. Will Bugs Bunny and the Looney Tunes gang bring their best effort to help LeBron save Dom?

SPACE JAM:  A NEW LEGACY has great animation and many laugh-out-loud moments that basketball and movie fans will appreciate. It also has a strong moral worldview with light Romantic elements about pursuing one’s dream and one pro-capitalist comment. The movie stresses rescuing one’s family and encouraging the next generation to strive for excellence. Parents of younger children should bear in mind there’s some comical slapstick violence, but also worthwhile family entertainment.

(BB, Ro, Cap, C, O, FR, L, V, N, A, M):
Dominant Worldview and Other Worldview Content/Elements:
Strong moral worldview with a light Romantic undertone of pursuing one’s dream, but a father does whatever he can to save his son from a villain and encourages him to pursue excellence in whatever he does, it’s clear that family values are at the center of the movie for this reason, there’s one pro-capitalist comment when a coach stresses that success in basketball could help set a player up to provide for his family, if he works hard, characters from various Warner Bros. Pictures projects appear in the background at a basketball game and so does The Wicked Witch of the West from THE WIZARD OF OZ and a few HARRY POTTER elements to set the stage at Warner Bros, and a supporting character says LeBron is “the chosen one”
Foul Language:
Two OMG profanities, one butt, one “h” word, one dang, a few stupid epithets, one foul word bleeped out when a coach gets mad at his basketball team, an animated cat spits out a bird
Violence:
Mild slapstick violence for laughs’ sake, but nothing too dangerous, such as characters hit their heads, basketballs hit characters, character runs into a wall, character fires his guns at a basketball, some TNT blows a hole in a bridge, etc.
Sex:
No sex
Nudity:
A cartoon Aquaman appears without his shirt, and some other movie extras have one scene with upper male nudity, Robin character appears in a Speedo
Alcohol Use:
No alcohol use, but old lady has a few martinis before her
Smoking and/or Drug Use and Abuse:
No smoking or drugs; and,
Miscellaneous Immorality:
Villain has a plan for revenge, but ultimately his plan gets thwarted, and some lying, but the truth prevails.

SPACE JAM: A NEW LEGACY focuses on NBA player LeBron James, who ventures into the Warner Bros. Studios “Serververse” to save his son from the clutches of a villain, where he gets help from Looney Tunes characters, including Bugs Bunny. SPACE JAM: A NEW LEGACY has a strong moral, pro-family worldview and one pro-capitalist comment, with a light Romantic undertone of pursuing one’s dream and some comical slapstick violence, but it has many laugh-out-loud moments and is wholesome and worthwhile family entertainment.

The movie begins with a young LeBron James on the basketball court. To LeBron’s regret, they lose, and his coach gives him a lecture about how if applied with rigor, LeBron’s basketball talents could change the trajectory of his family’s future, since he’s so good. To do this, LeBron has to put down his Nintendo game and give the game his full attention.

Cut to present day. LeBron and his family live in Los Angeles where he plays for the NBA on the Lakers. His two sons are very different from one another. One loves basketball, the other, Dom, cares more about digital innovations and even created his own video game. LeBron challenges Dom to spend more time on basketball and less time with digital tech.

LeBron takes Dom to Warner Brothers Studios in Burbank, Calif. to sit in on a meeting about some big movie deal on the horizon. During the meeting, a computer character named Al G. Rhythm (or algorithm in the tech world) shows LeBron the possibilities of inserting LeBron into dozens of movies using new technology. However, Dom scoffs at the idea and tells his father point-blank that he’s not going to a basketball camp. Soon after, Dom and LeBron get sucked into the so-called “Serververse” with Al G. Rhythm.

In this digital universe, Al. G. Rhythm says that to get Dom back from the Serververse, LeBron has to put together a basketball team and win a game to set things straight. Next, LeBron does a deep dive into the Serververse, landing him next to the one and only Bugs Bunny.

Will Bugs and his cast of famous toons help LeBron get his son back?

SPACE JAM: A NEW LEGACY is a sweet, funny modern take on the 1995 movie, SPACE JAM, starring Michael Jordan. The movie has some CGI intertwined with live action, the script clearly explains the need for both, highlighting technological innovations in cinema, especially since the first SPACE JAM. It’s also incredibly self-reflexive, poking some fun at movie moguls at a big Hollywood studio that might make some older viewers chuckle. Other Warner Bros. projects like THE MATRIX, KING KONG and THE WIZARD OF OZ, for example, help set the stage of the Looney Tunes who add some nostalgia to the mix.