LET THEM ALL TALK 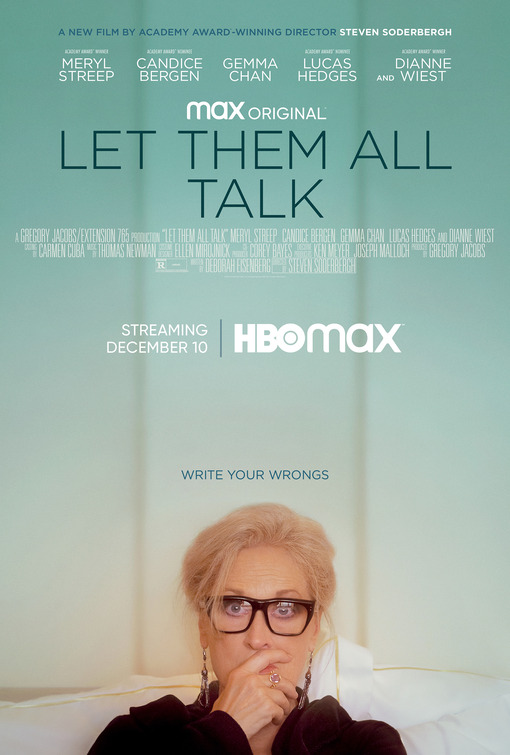 LET THEM ALL TALK is a drama streaming on HBO Max about a middle-aged novelist named Alice Hughes. Alice takes her two college gal pals, Susan and Roberta, and her nephew, Tyler, on a cruise to Great Britain to patch up old issues and receive a prestigious award. The only hiccup in Alice’s journey is that her literary agency, Karen, has sneaked on board to check on her. Alice’s supposed upcoming manuscript is nowhere to be found. Karen enlists Tyler’s help to find out why.

LET THEM ALL TALK has a fabulous cast, but that’s about it. The movie is slow and boring, with little intrigue. The performances are as good as they can be considering the lackluster script. LET THEM ALL TALK has a light humanist worldview. The characters are obsessed with their own desires and self-interests rather than other people. That said, Alice looks after her nephew and openly rebukes selfishness among her friends. However, LET THEM ALL TALK also contains some strong foul language, lewd dialogue and New Age references to healing crystals and the formation of the universe.

(H, B, Ro, FR, LL, S, A, MM):
Dominant Worldview and Other Worldview Content/Elements:
Light humanist worldview where many characters look out for their own desires and self-interests rather than genuinely care about others, some moral content where an aunt looks out for her nephew, and a woman rebukes selfishness openly among friends, some Romantic elements where an aunt tells her nephew that attraction from the heart is the fullest expression of life, another woman points out the wonder of the night sky, and a woman mentions she had a threesome back in the day with another guest on the cruise, plus some false New Age elements with a mention of healing crystals, and the assertion that all humans are the same with a stress on the universe forming as a miracle, but no mention of a Creator
Foul Language:
Eight obscenities (including five “f” words) and 11 profanities (mainly OMGs)
Violence:
No violence depicted or implied, but a character says something makes her feel violent though doesn’t act on it
Sex:
Light sexual content includes a mention of two people fornicating in a movie, and woman recounts a story of having a threesome with a married couple
Nudity:
No nudity
Alcohol Use:
Social drinking, scene in bar, champagne depicted in state rooms
Smoking and/or Drug Use and Abuse:
No smoking or drugs; and,
Miscellaneous Immorality:
Strong miscellaneous immorality includes lying, woman only looks to get married for money, some rudeness, gambling, and a mention of blackmail.

LET THEM ALL TALK begins in a restaurant with Alice Hughes and her literary agent, Karen. The pair discuss Alice’s upcoming novel, but Alice gets thrown off when Karen inquires about deadlines for the project. Alice insists that others have never interfered with her creative process before. Alice can’t travel via plane due to medical reasons, yet Karen convinces her to take a cruise ship to the Great Britain to accept the Footling Prize for Fiction. Alice reluctantly agrees.

Alice takes her twenty-something nephew, Tyler, and her two older college gal pals, Roberta and Susan, along for the overseas journey. Roberta sells lingerie in the mall and isn’t happy with her monetary status, constantly looking for a man who can help her achieve her financial goals. The cruise seems to be a promising option. Meanwhile, Susan’s son has some business troubles, so a getaway sounds like the move for her! After all, it’s been 30 years since they’ve all been together.

Once on board the Queen Mary II, everyone takes in the grandeur of the ship. The three old pals take an opportunity to have a drink in the evening and catch up, but it’s clear that time away from one another has brought more than just physical distance.

The next morning, Alice and Tyler debrief Alice’s plans for the day, including her schedule for writing her new novel. Shortly after, however, Karen calls Tyler and mentions that she’s on the ship and would like to meet up with him.

That evening, Tyler and Karen discuss the reason for Karen’s being on the ship. She’s worried that Alice isn’t working on her manuscript, and her supervisors will be irate if she’s not checking on Alice. So, Karen asks Tyler to keep it a secret, and they start hanging out socially when Alice seems preoccupied.

Like Alice, who seems to have an aversion to writing her manuscript while on board, Susan and Roberta are doing their own things on board. Roberta keeps looking for a spouse with loads of money, and Susan runs into an old sexual partner but tries to put it out of her mind. Meanwhile, Tyler starts developing romantic feelings for Karen, but it’s not clear that she feels the same.

Everything comes to a head when Alice catches Karen and Tyler on the bow of the ship.

LET THEM ALL TALK has a fabulous cast, but as far as accolades go, they stop there. LET THEM ALL TALK is slow-paced and boring. Any moments of intrigue are few and far between, but HBO Max probably will sucker in viewers with the names on the marquee. At some points, it feels like the actors are stepping on one another’s dialogue. That said, the performances are as good as they can be considering the movie’s lackluster script.

LET THEM ALL TALK has a light humanist worldview where many characters look out for their own desires and self-interests rather than genuinely care about others. There’s some morality. For example, Alice looks out for her nephew and openly rebukes selfishness among her friends. This content is mixed with some Romantic elements occur when an aunt tells her nephew that attraction from the heart is the fullest expression of life. Also, a woman mentions she had a threesome back in the day with another guest on the cruise. Lastly, some false New Age elements include a mention of healing crystals, a character asserts all humans are the same, and a character says the formation of the universe was a miracle but doesn’t mention the Creator or God. Due to all these reasons and some strong foul language, MOVIEGUIDE® advises extreme caution for LET THEM ALL TALK.