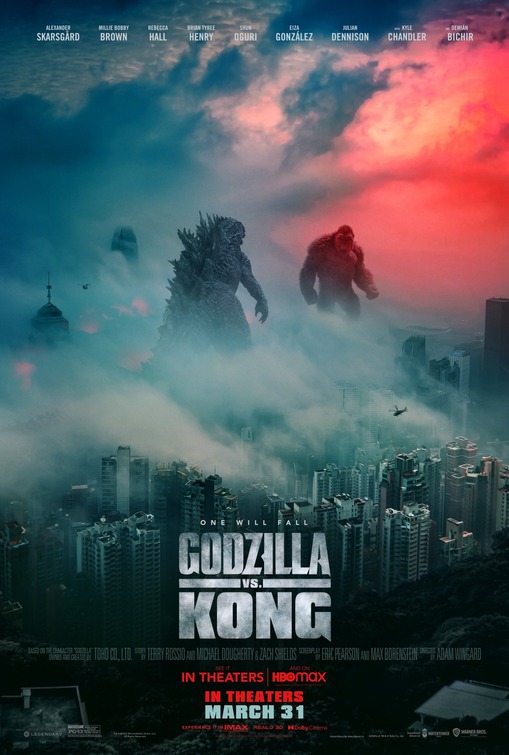 GODZILLA VS. KONG starts with Godzilla going on a rampage against the Apex Corporation, a powerful company studying his atomic energy. The head of the company finds that the origin to Godzilla’s energy is located in the original Hollow Earth home of Godzilla and King Kong. So, he provides some special flying machines to help some scientists take Kong to an entrance into the Hollow Earth. Hopefully, Kong can guide them. However, Kong is wary of humans, except for a little deaf girl who can talk to him using sign language. Also, Godzilla and Kong’s ancestors were mortal enemies, so Godzilla wants to use his fiery energy to destroy Kong.

GODZILLA VS. KONG is pretty much just a spectacular slugfest. However, it provides plenty of big screen thrills and a couple fun surprises. Also, the heart of the movie is Kong’s touching friendship with the little deaf girl. MOVIEGUIDE® advises caution for older children for some foul language and many battles between and against giant monsters. Godzilla and King Kong almost kill one another in GODZILLA VS. KONG.

(H, Ev, BB, C, LL, VV, A, M):
Dominant Worldview and Other Worldview Content/Elements:
Light humanist worldview about scientists trying to find a way to stop a giant atomic-powered lizard, with a mention of evolution in relation to something that one scientist calls “genetic memory,” and the fights between monsters seem to be just the “survival of the fittest” in action, but this content is mitigated by strong moral elements and some redemptive metaphors, symbols and behavior
Foul Language:
Five obscenities, one GD profanity by villain, and eight light profanities (mostly OMG and MG)
Violence:
Lots of strong monster violence with Godzilla and King Kong exchanging blows and body slams and kicks by Kong, at sea and among city skyscrapers, Kong fights two giant flying lizards and rips head off one flying monster and then takes a bit of the head and drinks some of its green blood, Godzilla uses his fiery energy beams to attack large battleships, Godzilla tears a battleship in two by swimming through it, many explosions as Godzilla fights battleships and battleships fight back, many explosions on land as Godzilla rampages or as Kong fights Godzilla and tries to avoid the giant lizard’s energy beams, frightened people run away from destruction and giant rampaging monsters, flying bat lizards attack people and King Kong and they fight back, King Kong uses an ax made from the atomic dorsal fins, a dying character has to have his heart shocked to revive him, and Godzilla and King Kong have to team up to fight and destroy another more powerful giant monster that appears, and some people are shown being killed but most of the massive destruction is of things, objects and buildings
Sex:
No sex
Nudity:
No nudity
Alcohol Use:
Brief alcohol use
Smoking and/or Drug Use and Abuse:
No smoking or drugs; and,
Miscellaneous Immorality:
Billionaire villain is power mad and wants to be the apex predator on the planet above all people and all creatures, and teenage girl goes on an adventure without her father’s knowledge.

GODZILLA VS. KONG pits the two monsters against each other when Godzilla suddenly goes on a rampage against a powerful corporation studying the source of his atomic energy and the scientists monitoring Kong take him to his original Hollow Earth home, which appears to contain the source of the giant lizard’s power that, hopefully, can be used against him. GODZILLA VS. KONG is pretty much just a spectacular slugfest, but it provides lots of big screen thrills, and the heart of the movie is Kong’s touching friendship with a little deaf girl who can talk to him using sign language.

The movie opens in the jungle enclosure where the scientists who discovered King Kong are keeping tabs on Kong. The big ape seems to share an affinity with Jia, the deaf adopted daughter of Ilene Andrews, the scientist caring for Kong. Jia lived on Skull Island and was saved by Kong, and Ilene adopted her.

Meanwhile, Godzilla attacks the Florida facility of the Apex Corporation, a scientific research company investigating Godzilla and the atomic energy in his dorsal plates. Bernie Hayes, who hosts a conspiracy theory podcast, has infiltrated Apex and barely escapes when Godzilla attacks. Bernie thinks Apex and its owner, a billionaire named Walter Simmons, are up to no good.

Madison Russell, daughter of the head of special projects at Monarch, a government agency assigned to control Kong and any other giant monsters threatening mankind, is an avid fan of Bernie’s podcasts. She thinks Bernie is onto something, but her father thinks Bernie’s a nut. So, Madison “borrows” the family van of her friend, Josh, to go see Bernie. They all decide to go back to the wrecked Apex facility and investigate.

Meanwhile, the Apex billionaire, Simmons, visits a former Monarch scientist, Nathan Lind, because of Lind’s theories about a hollow earth. Simmons tells Nathan that Apex has discovered a strange new energy source inside the Hollow Earth. They suspect that the Hollow Earth is the original place from where Kong and Godzilla emerged.

Nathan convinces Ilene that Kong can lead them to his home in Hollow Earth. There, Kong will be safe from the rampaging Godzilla while they can locate the energy source that gave Godzilla his powers and use it to stop Godzilla from causing any further damage. Joining them is the Apex billionaire’s daughter, Maya.

They place a sedated and chained Kong on a large battleship and head for Antarctica, where Apex has discovered an entrance to the Hollow Earth. The ship is surrounded by several other battleships. Along the way, however, Godzilla attacks them and eventually renders Kong unconscious. The people and Kong escape with their lives when what’s left of the convoy disables all signs of life, fooling Godzilla into thinking they’re all dead.

As Bernie leads Madison and Josh into Apex’s underground facility in Florida, Kong leads the scientists to his ancestral throne room in the Hollow Earth. The giant room is filled with veins of Godzilla energy. Kong also finds a glowing ax made with the dorsal fin of one of Godzilla’s ancestors. Godzilla has attacked Apex’s facility in Hong Kong, however, and has used the atomic fire ray to cut a tunnel leading to the throne room. Godzilla attacks again, and Kong starts fighting with him. However, Apex and its diabolical owner has a surprise in store or everyone, something he hopes will make him the apex predator on the planet.

GODZILLA VS. KONG is pretty much just a spectacular slugfest. However, it provides plenty of big screen thrills and a couple fun surprises. Also, the heart of the movie is Kong’s touching friendship with the little deaf girl, Jia, who can talk to Kong using sign language. Her adopted mother, Ilene, asks Jia why she didn’t tell her she could talk with Kong. Jia says Kong was afraid and asked her not to mention it.

Godzilla and King Kong do a lot of fighting in GODZILLA VS. KONG. They almost kill one another a couple times. Also, Kong fights two flying lizard monsters, ripping off one flying lizard’s head and taking a bite out of it as he drinks the monster’s green blood. In Kong’s ancestral throne room, some flying lizard bats attack and kill people, who try to fight back, with help from Kong and his ax. A final battle occurs at the end of the movie with a surprising giant foe. GODZILLA VS. KONG also contains some brief foul language. So, MOVEGUIDE® advises caution for older children, especially older pre-teens