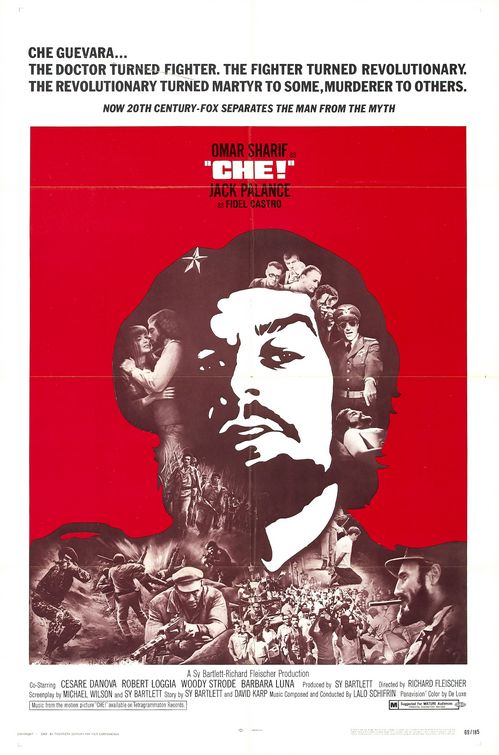 “Armed Struggle” is the rallying cry of CHE, Steven Soderbergh’s four-hour tribute to the violent Communist tactics of guerrilla warrior Ernesto “Che” Guevaro. Divided into two parts, the movie tells how Che came to Cuba with Fidel Castro to overthrow the government by fomenting Communist revolution. Led by Fidel, Che and Castro’s men start with the isolated rural sections of the eastern section of Cuba and work their way to the middle section of the island to cut it in half. After achieving violent victory and working for Communism in Cuba and Africa, Castro orders Che to Bolivia, where the American government advises the Bolivian army, which finally captures and kills Che.

CHE is a left-wing, anti-American primer on how to wage violent Communist revolution and destroy Western Civilization. The movie’s leftist worldview is more Romantic and fascist rather than atheist humanist. Che’s violent methods, though slightly watered down, have finally been successful in Bolivia recently, as well as Venezuela. Leaving politics aside, this movie is amazingly photographed but rather unemotional and subdued, and sometimes disjointed. The acting is not as impressive as advertised, though it is good.

(RoRoRo, HH, CoCoCo, APAPAP, RHRHRH, PCPCPC, Ab, C, LLL, VV, S, N, A, DD, MMM) Very strong Romantic/fascist worldview with strong humanist elements though the main focus is on promoting a pro-violent Communist ideology with very strong anti-American content that revises history and whitewashes the biography of a murderous Communist in line with the movie’s very strong politically correct leftist viewpoint, plus a comment against religion and brief positive Christian content from two or three people, but the movie does not promote a Christian view on redeeming and sanctifying sinful people with the Gospel of Jesus Christ; 25 obscenities (including some “f” words) and one light profanity in Part One and 16 obscenities (including three or four “f” words), one GD and two light profanities in Part Two; strong violence with some blood and bloody wounds but not extremely graphic as in movies with similar action, such as lots of gun battles during guerrilla warfare and actual warfare, explosions during some of the fighting, men shot dead, people machine gunned down, mortar fire, several executions; no actual depicted sex but implied gang rape when deserters grab rural man’s daughter and mention of rape afterwards, plus guerrilla soldier warns local soldiers not to touch vulnerable woman guerrilla and leader admonishes man not to disrespect the locals fighting with them and very vaguely implied adultery; brief alcohol use; smoking and brief drug reference; and, deceit and propaganda in the name of the false ideology of violent Communist “armed struggle” and “revolution,” rebellion against authority, brief platitudes about “freedom” and “equal rights to blacks and Hispanics” and “love of humanity, justice and truth” but those platitudes are not defined and are not really applied to those who actively oppose Communism, support the United States, or get in the way of Fidel Castro and Che Guevara’s socialist, Communist and revolutionary goals, and man leaves his two apparently middle class wives and children to play guerrilla warfare in the name of a radical, violent ideology that historically has caused more pain, oppression and unnecessary destruction than it stops.

“Armed Struggle” is the rallying cry of Steven Soderbergh’s two-part hagiography of Ernesto “Che” Guevara, the violent Communist revolutionary who worked with Cuba’s Communist dictator Fidel Castro to overthrow American capitalism and western-style democracy throughout the world. CHE is a left-wing, anti-American primer on how to wage violent Communist revolution and, ultimately, destroy Western Civilization and its traditional values. The movie doesn’t overtly promote an anti-Christian agenda, but it also fails to point out the anti-Christian, atheist agenda of Che Guevaro, Fidel Castro and other Marxist-Leninist Communists.

Divided into two parts titled “The Argentine” and “Guerrilla,” the movie focuses on Che’s militaristic campaign in the Cuban Revolution during the 1950s and his smaller campaign to overthrow Bolivia’s military government in the 1960s. The first half also shows Che in 1964 New York City at the United Nations promoting the anti-American party line of the international Communist movement, which includes Castro and his past and present Cuban cohorts.

The first part tells how Che came to Cuba with Fidel Castro in 1956 to overthrow the government by fomenting Communist revolution in the countryside. Led by Fidel, Che and the rest of Castro’s men start with the isolated rural sections of the eastern section of Cuba and work their way to the middle section of the island to cut it in half. Che struggles hard to win the guerrilla war for Castro. He eventually achieves final victory for Castro by defeating the Cuban army in the city of Santa Clara. Part One ends in 1959 with Che on the way to Havana to celebrate victory and begin helping Castro run the country.

Cut to Part Two, set in the middle 1960s, with Che on his way to Bolivia after helping run Cuba by leading execution squads and promoting armed Communist revolution in Africa, which are conveniently not shown. Castro smuggles Che into Bolivia, where the American government starts advising the Bolivian army on stopping Che’s Communist guerrilla warfare. The army finally captures and executes Che, but the movie is unclear on the American advisors’ role in that. According to what seems to be the most reliable official record, the CIA advisor at Che’s capture and the American government officially asked Bolivia to keep Che alive for professional interrogation and imprisonment, but the Bolivian army decided to execute him instead on the spot. The movie conveniently never mentions this, however.

One thing becomes clear after watching CHE: Communists and other neo-fascist leftists and liberals, even American ones such as President-elect’s Barack Hussein Obama’s “family friend” Bill Ayers, the 1960s student terrorist, still believe that the “armed struggle” of violent Marxist revolution is a viable strategy for transforming modern western society. This movie also appears to endorse Che’s violent, non-Christian, anti-American, Communist strategy, including his evil Marxist ideology. By his stubborn silence and disingenuous statements over the Ayers issue, President-elect Obama has given moral cover for the kind of evil Communist violence spouted by Ayers, Che Guevara and Communist dictators like Fidel Castro of Cuba and Hugo Chavez of Venezuela.

The first half of this movie is a bit disjointed. Viewers are never really given a handle on why Che believed that the western capitalist system, especially America, was responsible for the “oppression” of poor people in Cuba and Latin America. The Che character, played by Benicio Del Toro, just asserts this Marxist ideology, like a parrot. Consequently, Del Toro seems more like a Marxist robot and an ideological cipher than a real, living and breathing human being. This is not true of the lively actor who plays one of Che’s fellow leaders in the movie’s first half.

The movie does show Che, who was a doctor from Argentina, medically treating the peasants in Cuba he is trying to recruit. But, does he really care for their well being, or is he just using them for his radical political ends? The movie fails to dramatically or emotionally answer that question, though, intellectually speaking, it does try to indicate that Che actually does care. Even so, it ultimately fails to dramatically prove this apparent assertion or premise.

After watching this movie, a concerned Christian might wonder, Why couldn’t Che just become a Christian missionary/doctor and accomplish the same ends for these poor people in the rural areas of Cuba where Fidel and Che began their Communist revolution? Martin Luther King greatly changed the whole United States through his non-violent Christian methods, so why couldn’t Che and Castro do the same thing for Cuba? That’s one question no one ever seems to ask liberals and leftists who admire leftwing radicals like Che Guevara or Fidel Castro.

Watching the movie’s second half, about Che’s efforts to lead a revolution in Bolivia, it becomes clear that Che and his fellow Cubans failed to inspire the people in rural Bolivia to rise up and follow him in 1967 during his quest for successful Communist revolution. Thus, the ultimate conclusion of this overlong movie is that, if you want to have a successful Communist revolution, the revolutionary movement must arise internally; it can’t be forced by external forces, much less by foreigners.

This is not a comforting conclusion, or a moral one, however, because the goal of many leftists, especially those today who admire Che, still seems to be violent Communist revolution. The fear of those who remember history is that the radical leftists supporting President-elect Obama today will turn violent if Obama, or the American people, refuse to give them what they want in the next four years. The fact that the filmmakers behind CHE are highly respected by many people in Hollywood should be of serious concern to Americans, as well as Jews and Christians, especially those worried about the influence of Hollywood in removing the Jewish and Christian heritage that really makes America great!

Sadly, Che’s tactics of violent indigenous Communist revolution finally seem to be working in Bolivia, where violent left-wing street protests took down two moderate governments in the past five years, finally resulting in the 2005 election of a leftwing, anti-American socialist for president. Violent Communist revolution now seems to be on the move in South America. This movie cannot help but add to this great evil, which has a prolific tendency to destroy Christianity, not just capitalism, true economic and political liberty, and democracy.

Be that as it may, it is important to note that the movie’s main consultant is Jon Lee Anderson, an obviously pro-Communist author who wrote a biography of Che that’s popular among left-wing activists, including some who claim to be Christian. In the movie’s production notes, Anderson predictably, in an ideological leftist way, heaps shame on the past leader of the Communist Party in Bolivia, who withdrew from Che and his band of violent Communist revolutionaries his promised support from the Party’s urban network of radicals. It is also interesting to note that Che’s father was a supporter of the fascist Argentine dictator Juan Peron, who also spouted socialist ideals and socialist propaganda (Communism and socialism are actually fascist ideologies, as are terms like “progressive” and contemporary definitions of “liberalism”).

Leaving politics aside, this movie is amazingly photographed but lacks emotion, drama and dynamic narrative structure. It is also sometimes disjointed. Benicio Del Toro as Che goes through a lot physically during the movie’s running time, but his performance is not that startling or impressive. The poorly developed script, with its huge cast of characters wandering in and out of the story, does not help. In the end, CHE probably will not connect with most viewers, especially those who don’t want to sit through all four hours.

Finally, Christians and Jews should remember that, neither Moses nor Jesus Christ were socialist radicals, much less violent Communist revolutionaries. Neither were they lackeys for a neo-fascist, socialistic world order where big corporations ask for government handouts when they can’t manage their business affairs properly. Of course, Jesus Christ died for our sins and rose from the dead so that God could grant those who believe in Jesus eternal life and the power of the Holy Spirit to change their lives for the better, according to God’s Will (John 3:1-21 of the New Testament or Renewed Covenant).