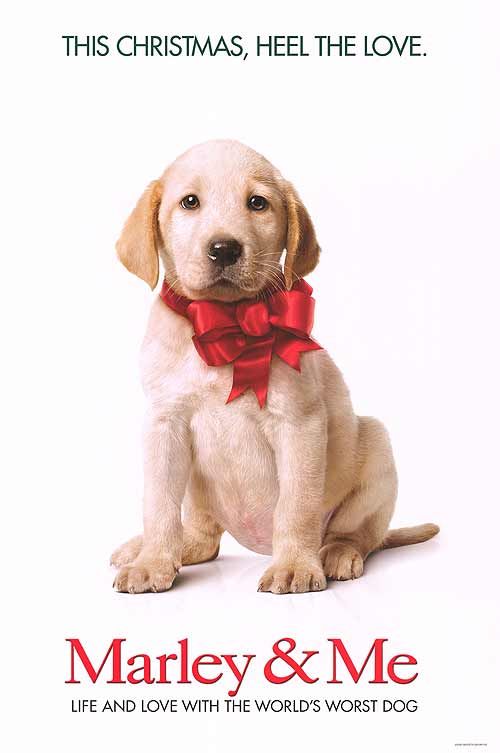 MARLEY & ME is the story of John and Jennifer who adopt a puppy named Marley and their lives are never the same. Marley flunks out of obedience school but the couple continues to adore him, despite his unruly ways. Time passes as Marley grows up, constantly getting into trouble. As the family grows, John is tempted to leave the family as he longs for a job as a big city reporter. However, he gladly chooses his family. As time passes, Marley ages along with John, Jennifer and the children.

MARLEY & ME has lots of heart. Owen Wilson and Jennifer Aniston are outstanding as the young couple trying to handle an unruly dog while raising a family. The story is paced well and the directing is sure handed. Even better, the movie promotes marital fidelity and the joys of bringing children into the world in the context of a loving marriage. There is plenty of foul language, however, and some bedroom scenes between the married couple. These things merit caution for pre-teens. Overall, this is a heartwarming family movie marred by some regrettable elements. Moviegoers should exercise media-wise discernment.

(BB, Ab, LL, V, S, N, A, D) Strong moral worldview with a pro-marriage and pro-family message but with one minor scene in a bed and breakfast room where married couple is uncomfortable sleeping together in a room with many paintings of Jesus and Mary and man says he’s really uncomfortable with the picture of the Pope looking at them instead; 10 obscenities, 14 profanities, references to dog’s genitalia, and some scatological humor such as references to dog feces; off-screen stabbing; implied sexual relations between married couple, married couple in bed together, man hops into small bed with wife, passionate kissing, and references to married couple trying to have children; married couple go skinny dipping but are covered up and scantily clad women on beach; drinking of beer; some smoking; and, nothing else objectionable.

MARLEY & ME is the story of John and Jennifer, who adopt a puppy named Marley, and their lives are never the same.

John and Jennifer take the puppy as a “test” before having children. Though the puppy chews everything in sight and destroys the garage, Jennifer wants to keep the puppy. Marley flunks out of obedience school, but the couple continues to adore him despite his unruly ways. Time passes as Marley grows up, constantly getting into trouble.

Jennifer gets pregnant, but has a miscarriage. Devastated, she and John takes a trip to Ireland to try again to conceive. Meanwhile, Marley is left with an unsuspecting dog-sitter who is overwhelmed by the huge dog’s behavior.

The couple has their first child. John writes a newspaper column about the dog’s antics and family life. All seems well, but inside John is getting restless. He had always wanted to be a flashy news reporter like his friend Sebastian, but instead is becoming a family man with a local column instead.

Jennifer gets pregnant again. After the baby is born, she decides to work at home and raise the children. Pressure is put on John, and the couple experience conflict as Jennifer juggles the children, the dog and her job. In a brief scene, they fight, and Jennifer suggests that Marley is just too much to handle. John tries to soothe the situation and offers to have the dog stay at his friend’s apartment for a few days.

John’s friend suggests that John just leave Jennifer and the children and enjoy the life of a swinging single, but John’s love and commitment to his wife and family is too strong. He decides to stay with his family no matter how hard it gets, and marriage and family win the day.

[POSSIBLE SPOILERS] The couple has a third child. On John’s 40th Birthday, Jennifer suggests that he pursue his dream of being a reporter by taking a job at a newspaper in Philadelphia. That would mean selling their home, moving their children and dog, and changing their lives, but she is willing to sacrifice for him, even as he has sacrificed for her. Then, as Marley reaches old age, the family comes close together for their aging best friend.

MARLEY & ME is a well made, tear filled movie with lots of heart. Owen Wilson and Jennifer Aniston are outstanding as the young couple trying to handle an unruly dog while raising a family. The story is paced well and the directing is very sure handed.

The movie plays on the emotions without being maudlin and delivers a satisfying finish.

MARLEY & ME is a family movie through and through, unlike many that are produced today. It highlights fidelity, commitment and the joy of bringing children into the world in the context of a loving marriage.

There are “bedroom” scenes that are in the context of a committed marriage, which still warrant caution. There is also some foul language and one scene of implied married sex in an Irish bed and breakfast containing tasteless paintings of Jesus and Mary.

Overall, this is a family movie that is somewhat marred by a few problem moments requiring caution, especially when it comes to children.

Rent or Buy MARLEY & ME: