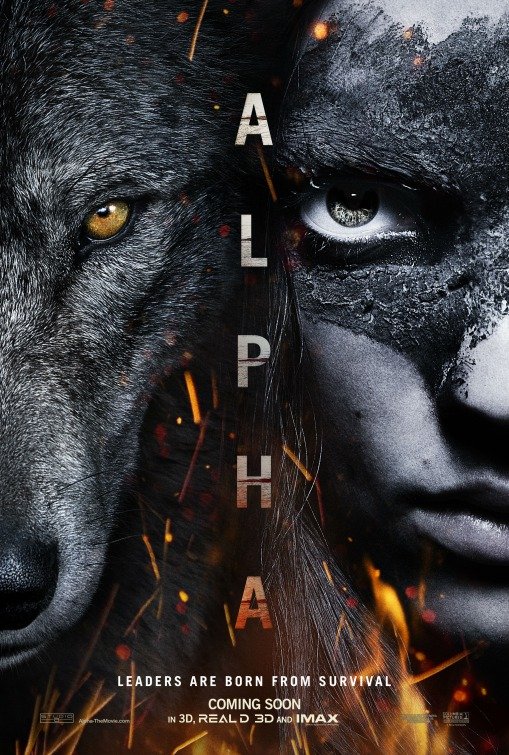 ALPHA is an exciting action adventure movie set during the last Ice Age. The movie opens 20,000 years ago in Europe with a teenager named Keda on a bison hunting party with his tribe, including his father, the tribal chief. Keda’s tribe and another tribe drive the bisons off a high cliff, but the horn of one bull grabs Keda’s clothes and tosses him off onto a ledge far below. Keda’s father wants to rescue his son, but it’s an impossible climb. Keda wakes up a couple days later and begins the long trek home. During his journey, he befriends a large wild dog as winter approaches.

ALPHA is stirring, moving and satisfying. Director Albert Hughes, who created the story, does an impressive job steering this movie to its heartfelt conclusion. Kodi Smit-McPhee of X-MEN: APOCALYPSE delivers a marvelous performance as Keda. ALPHA has strong moral elements that are pro-family and mention an afterlife, but this content is mixed with some references to tribal ancestors, as well as an evolutionary approach to history. It also contains scenes of intense peril. MOVIEGUIDE® advises caution.

(PaPa, BB, C, FR, Ev, VV, N):
Dominant Worldview and Other Worldview Content/Elements:
Truly mixed worldview with strong pro-family elements where father and son clearly share a strong bond, mother is clearly devoted to her son and worries about him (she tells her husband that their son “leads with his heart, not his spear”), movie extols courage and perseverance, the hero’s father is the tribal chief and has a merit-based system where people are taught to earn their way and pull their own weight in making a living and supporting family and tribe, references are made to an afterlife and the “spirit” or soul, tribal chief tells tribal neophytes to focus and not to give up, and compassion and friendship are extolled, but there are references to a tribe’s ancestors (the ancestors have created pillars of stones to lead tribal hunters to their traditional hunting grounds), hero thinks the Northern Lights are a sign from his tribe’s ancestors rather than God, a primitive stoicism is extolled, and the tribe has a female shaman who appears to bless the hunters before they go out to hunt, plus the movie assigns a date of the last Ice Age in Europe as 20,000 years ago, which implies some evolutionary thinking and inflated age levels that may be objectionable;
Foul Language:
No foul language;
Violence:
Moments of intense peril and hunting animals for food include bison herded off a tall cliff for food, the horn of one bison gets caught in teenager’s clothes and tosses the young man off the cliff, teenager eventually falls onto a ledge far below and is left for dead, a vulture tries to attack the young man, but he smashes its body against the cliff and tosses it off the ledge, a wolf/dog snatches a teenager away from a nearby fire at night and runs off into the dark, large wild dogs run after teenager stranded in the wilderness but he climbs a large tree stump and wounds one of the dogs with his knife, teenager tries to treat the dog’s wound and eventually succeeds, teenager kills a rabbit, teenager hits dog’s snout and says wait your turn when dog tries to snatch the rabbit meat from young man’s hands, young man gets trapped beneath ice, hyenas chase teenager and dog, dog fights large cat, teenager and dog face blizzards that threaten their lives, dog chases and snaps at two wild boars for food, teenager and dog encounter a man frozen to death and sitting by a small makeshift tent;
Sex:
No sexual content;
Nudity:
Brief upper male nudity;
Alcohol Use:
No alcohol use;
Smoking and/or Drug Use and Abuse:
No smoking or drug references; and,
Miscellaneous Immorality:
Nothing else objectionable.

ALPHA is an exciting action adventure movie, set during the last Ice Age in Europe, about a teenager on a hunting expedition who suffers a great fall and befriends a large wild dog as he desperately tries to return to his family. ALPHA is a thrilling, moving adventure for families, with strong themes about family bonds, perseverance, and earning respect, but there are scenes of intense peril, some references to ancestors and a tribal shaman character.

The movie opens supposedly 20,000 years ago in Europe with a teenager named Keda on a bison hunting party with his father, Tau, the chief of their tribe. Tau and the other men are teaching five youngsters how to make sharp stone spearheads. Only Keda and one other boy do it correctly. A few days later, Keda’s tribe meets up with another tribe led by a friend of his father’s. The two tribes follow a trail of rocks left by their ancestors to the hunting ground. One evening, in a large cave, the men tattoo the Big Dipper on the hands of Keda and the other young men so they can always find their way home. Another night, the tribes encounter a pack of wild dogs or wolves, and one of the wolves snatches one of the teenagers sitting by the fire.

On the day of the hunt, the two tribes drive a herd of bisons over a tall cliff, but one of the bulls turns around and his horn grabs Keda by the collar. Keda goes over the cliff, but his hands manage to grab a perch on the cliff wall. However, Keda slips and falls onto a ledge far below. Tau wants to climb down and rescue his son, but it’s an impossible climb. The other men convince him that Keda is lost.

Two or three days later, a vulture wakens Keda, who smashes the bird against the wall and casts its body down the cliff. A big thunderstorm arrives a day or two later, and Keda falls into the river created by the thunderstorm at the bottom of the cliff.

Keda crafts a splint for his injured foot and begins walking home. One day, a pack of large wild dogs threaten to take Keda, but Keda climbs a tall tree stump and injures one of the dogs with his knife. The other dogs abandon their companion and Keda, who takes pity on the wounded dog. He carefully treats the dog’s wound, and the dog starts following Keda on the journey home.

Visiting another cave, Keda gets the dog to take a drink of his water. Keda also catches and cooks a rabbit, giving some of the meat to the dog.

The next day, Keda tries to leave the dog behind, telling it to go home to its own family. However, the dog keeps following Keda, who names the dog Alpha. Keda’s experience in the wilderness starts to mature him, but he becomes worried that he won’t make it back home in time before winter comes.

Sure enough, the snows start to fall. Can Keda and Alpha survive?

ALPHA is a great survival movie, one of the best of its kind in some time. It’s stirring, moving, and satisfying, with a heart as big as the outdoors. Director Albert Hughes, who created the story, does an impressive job steering this project to its conclusion. Also, Kodi Smit-McPhee of X-MEN: APOCALYPSE and DAWN OF THE PLANET OF THE APES delivers a marvelous performance as Keda, the sensitive but tough prehistoric young man.

ALPHA is subtitled in English to give the movie an air of authenticity. It has strong themes about family bonds, perseverance and earning respect. Keda’s father imparts to Keda the lesson that he must earn his living and provide for his family and his tribe. The love between Keda and his parents is one of the story’s most moving parts, so ALPHA isn’t just a movie about a boy and his dog.

That said, the movie has scenes of intense peril. Also, there are references to the tribe’s ancestors. For example, one night, Keda sees the Northern Lights and believe his ancestors have provided the light for him to lead him home. Thus, ALPHA doesn’t have any references to God, though it’s clear that the tribes believe in an afterlife where people’s spirits live on after they die. Modern archeology has shown us, however, that primitive cultures like the one in this movie often believed in a benevolent, personal God who makes moral demands on human beings. Even in cultures where this “primitive ethical monotheism” has been replaced, there still can be people within such a culture who still believe in a Creator God. There is also a female shaman character in the movie, but there’s no real content depicted in the blessings she seems to bestow on the hunters in one scene. At the end, however, it appears she understands how the natural world works, and she makes an important scientific discovery for the tribe that impacts their lifestyle in a major but positive way. There’s nothing pagan or occult about her discovery, however.

Ultimately, ALPHA warrants caution for older children because of the intense peril and ancestor references, as well as its evolutionary approach to history.