ALVIN AND THE CHIPMUNKS 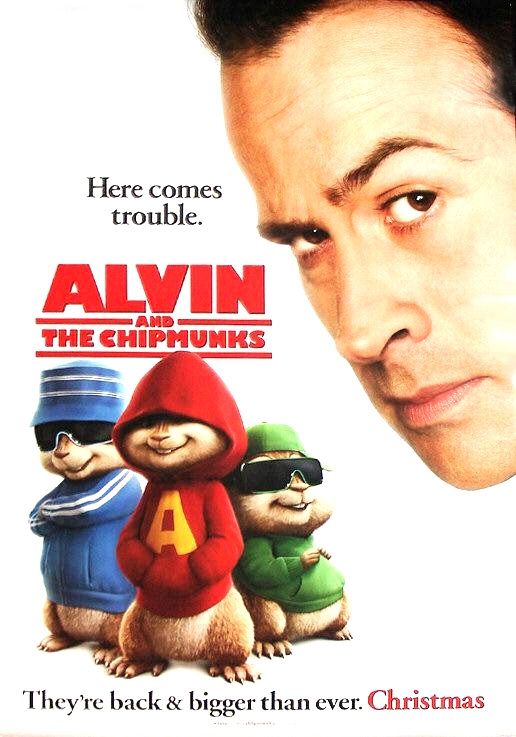 ALVIN AND THE CHIPMUNKS opens with Alvin, Simon and Theodore going to Hollywood when their mountain home tree is cut down for Christmas. They end up at Jett Records in Hollywood, where they jump into a bag of goodies carried by struggling songwriter David Seville. They gorge themselves on sugary food and trash his apartment. David tries to get rid of them, until he finds out that they can sing. David presents them to the Jett Record mogul, Ian Hawk, who turns them into a billion dollar franchise. David tries to protect them as if they were his own children, but Ian tries to exploit them and take them away from David’s protective control. How can the family, David and his three chipmunk boys, get reunited?

ALVIN AND THE CHIPMUNKS is very funny without being cutting, sharp, mean-spirited, or edgy. It’s filled with a lot of heart and love and good family values celebrating Christmas as a fun holiday. There’s very little bathroom humor, some suggestive dancing and some cartoon violence. If you want to have fun this Christmas and laugh until you cry, ALVIN AND THE CHIPMUNKS may be the movie for you.

(BBB, C, V, A, M) Very strong, extremely moral worldview with light but solid Christian elements talking about celebrating Christmas and God; no obscenities or profanities, one exclamatory reference to God and some bathroom humor (farts, raisin or poop debated, etc.); slapstick cartoon violence such as sandbag falls on man’s head, pot falls on man’s head, chipmunk gets caught in ceiling fan, etc.; no sex but mild suggestive dancing and mild kissing; provocatively dressed dancers but no nudity; some alcohol use; no smoking; and, lying rebuked and manipulation rebuked.

ALVIN AND THE CHIPMUNKS recalls the look and feel of the phenomenon that swept the culture in the 1960s yet has a modern sensibility with a lot of heart. For those very few who don’t know Alvin and the Chipmunks, Alvin is the wild and impetuous boy. Simon is the oldest and wants to please. Theodore fell out of the tree when he was born and is a little naïve but lovable.

The movie opens in the high Sierra Mountains with the three chipmunks, Alvin, Simon and Theodore, singing a song that references God while they store up nuts for the winter. Alvin expresses a little bit of boredom, and the next thing we know, their tree is being cut down and hauled off as a Christmas tree destined for Hollywood.

The tree is erected in the Jett Record building. While our three chipmunk friends try to get oriented, down-and-out songwriter David Seville is trying to sell his songs to the ruthless and manipulative Jet Record mogul, Ian Hawk. As he enters Jett Records, all the staff recognizes him and obsequiously offers him cappuccino and cookies. When Ian hears the old-fashioned, simple melodies of David’s song, the mood changes, and Ian pulls the carpet out from under David and kicks David out unceremoniously, but not before David takes back the goody basket.

As David leaves, the three chipmunks jump into the goody basket. At his small Hollywood apartment, they gorge themselves on sugary food and, in the process, trash his apartment. David tries to get rid of them, until he finds out they not only can talk, but they can sing. Of course, when David introduces the singing chipmunks to Ian, Ian quickly turns them into a billion dollar franchise.

David tries to protect them from being exploited as if they were his own children. Ian tries to exploit them and take them away from David’s protection. The chipmunks soon learn that fame and fortune isn’t all it’s cracked up to be and the question becomes, how can the family, David and his three boys, get reunited.

The good news about this movie is that it celebrates family and celebrates Christmas as a fun holiday. The executive producers, Janice Karman and Ross Bagdasarian, Jr. have carried on the show for 40 years after the death of Ross’s father, the creator. Ross told MOVIEGUIDE® that he was Simon, one of his brothers was Alvin, and the other brother was Theodore. Evidently, when inspiration hit, his father was down to his last $200. Instead of getting food, he bought a tape recorder, probably one of the best investments anybody’s ever made.

This movie is very funny without being cutting, sharp, mean-spirited, or edgy. It’s filled with a lot of heart and love and good family values. David Cross does a good job as Ian to keep him exploitive but not mean. And, Jason Lee does a great job as David Seville. He really interacts with the chipmunk characters that are not there in a wide open, heartfelt, enthusiastic way.

This movie in the beginning feels very time-dated and usually that would be the death knell, but the jokes are so good that quickly the campy, time-dated setting becomes a positive element. This is not just a memory of things people loved in the 1960s but it’s a reinvention of Alvin and the Chipmunks. If you want to have fun this Christmas and laugh until you cry, ALVIN AND THE CHIPMUNKS may be the movie for you.

Now, there is some caution. At one point, Ian has the three chipmunks singing with backup dancers, who are dressed provocatively. The scenes are fast and the scenes are fun, so it doesn’t seem to be too problematic, but it’s worth noting. Also, there is some slapstick violence and bathroom humor, but very, very little. The good news is that a little media wisdom will go a long way to make ALVIN AND THE CHIPMUNKS one of the most enduring Christmas movies. . . .

Rent or Buy ALVIN AND THE CHIPMUNKS: