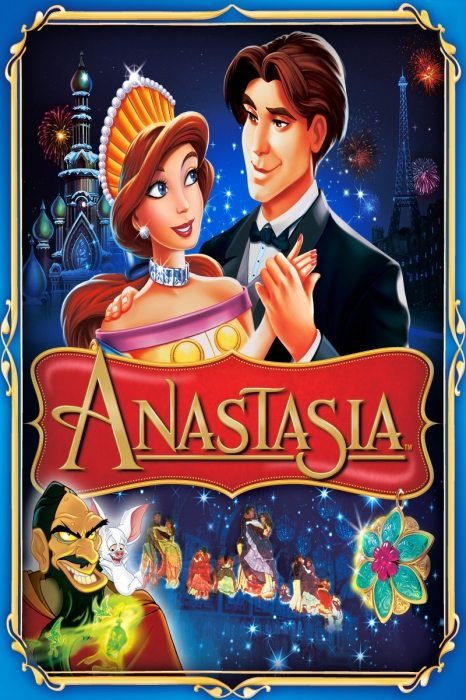 ANASTASIA opens with the Czar's mother, the Dowager Empress, telling the audience how wonderful life was for the royal Romanov family before the evil Rasputin entered the Imperial Court. At a ball, the Empress gives Anastasia a music box with a key that says, "Together in Paris." Rasputin enters and curses the Czar. The Russian Revolution follows, and the kitchen boy, Dimitri, saves the Empress and Anastasia. In the confusion, Anastasia is separated from her Grandmother. Ten years later, Anya emerges from an orphanage. When Dimitri sees Anya, he thinks he has found an Anastasia look-alike who can help him claim the reward offered by the Empress. Meanwhile, Rasputin heads back to earth from limbo to kill Anastasia. The story comes to a climax when the Empress, Anastasia and Dimitri realize the truth about love and family.

Don Bluth, who gave us AN AMERICAN TALE, has produced a superb animated film. The historical side of ANASTASIA enhances the romance and will leave many viewers a little teary-eyed. Regrettably, the movie has some scenes which are too frightening for little children. There is no mention of God in the movie to balance the evil, supernatural Rasputin. ANASTASIA is magnificent entertainment which parents and children can enjoy if parents help their children develop discernment.

(Ro, C, V, S, A, D) Romantic worldview with some answered prayer & redemptive elements; no foul language; some intense animated violence including battles with Rasputin, demons attack a train & a final battle with Rasputin & a demonic horse, also frightening grotesqueries including Rasputin loosing his body parts in Limbo (which caused a little girl in the screening audience to cry); some very mild sexual innuendo; alcohol use; and, lying & cheating.

ANASTASIA is 20th Century Fox’s attempt to carve out a piece of the highly lucrative animated family film marketplace which has been almost the exclusive property of Walt Disney Company for many years. Where most of Disney’s animated successes, such as BEAUTY AND THE BEAST, LITTLE MERMAID and THE LION KING, are pure fantasy, ANASTASIA relies on some historic characters and elements. This human side of ANASTASIA enhances the romance, which is the core of the movie and which will leave many adults a little teary-eyed. At the same time, however, the historical revisionism detracts from the overall fantasy and muddies the plotline, especially since the jeopardy in the movie depends on the vengeful attacks of the wicked Rasputin.

ANASTASIA opens with a voice over by the Czar’s mother, the Dowager Empress Marie, who tells the audience how wonderful life was for the royal Romanov family before the evil Rasputin entered the Imperial Court. At a magnificent ball in the Imperial Palace, the Czar’s mother gives Anastasia a little music box with a key that bears the inscription “Together in Paris.” Rasputin enters the court and curses the Czar and his family for rejecting him. The Russian Revolution follows, and the little kitchen boy, Dimitri, saves the Czar’s mother and Anastasia by sneaking them out through a secret door. In the confusion of the Revolution, as the icy Volga drags Rasputin to his death, Anastasia is separated from her Grandmother, who catches the last train out of the crumbling capital.

Ten years later, a beautiful, young Anya emerges from a run-down orphanage. Anya cannot remember her past but still wears the key to the music box and wants to go to Paris to find out its meaning. At the train station, an old woman tells Anya that Dimitri is the person who can get her the papers to leave Russia. Dimitri and uncle Vladimir have been auditioning women to pose as Anastasia so they can claim the reward promised to anyone who finds Anastasia by the Dowager Empress, who now resides in Paris. When Dimitri sees Anya, he thinks he has found an Anastasia look-alike who can help him claim the reward.

Meanwhile, Bartok the bat informs his master Rasputin, who is in Limbo, that Anastasia has been found, and so Rasputin heads back to earth to kill Anastasia, who is the last of the royal Romanovs. Dimitri and Vladimir head toward Paris, teaching Anya everything they know about the Princess. Rasputin harasses them with demons, at several turns, and the story comes to a climax when the Dowager Empress, Anastasia and Dimitri realize the truth about family and love.

Don Bluth, who gave moviegoers AN AMERICAN TALE, has executed a superb animated movie for 20th Century Fox, on a par technically with anything Disney has produced. Furthermore, the story is very emotive, and many the screening audience left with tears in their eyes because they were so moved by the fulfillment of the romantic promise of the story. Mr. Bluth has avoided being too sweet which is frequently the greatest failing of animated movies, but, regrettably, he has gone too far in the other direction and produced some scenes which are too frightening, as was apparent from the cries of some of the younger children at the screening.

Dramatically, the orchestration of the major characters leaves much to be desired since the evil Rasputin with his occult powers has no real opposition to tip the scales in favor of our heroes because the real counterweight to Rasputin’s evil, the omnipotent, sovereign God, has been left out of the film. All though there are some hints of answered prayers, the heroes must save the day themselves, which strains the credibility of the audience. No doubt, this skewed emphasis on the demonic will disappoint many Christians.

Since the movie has some basis in history, anyone who has taken European History 101 will realize that Rasputin was not the instigating force in the Russian Revolution. In the movie, the Communist Revolution is reduced to a tool of the evil Rasputin rather than a political movement headed by Vladimir Lenin. Although from a certain perspective Communism was a manifestation of spiritual warfare, the movie ignores the reality of history, a fact which will unsettle those adults who will remember the real evils of the Russian Revolution.

In the final analysis, however, ANASTASIA is magnificent entertainment. It is a movie that parents and their children can enjoy as long as those children are not too little and as long as the parents help their children develop discernment about the spiritual and historical weaknesses of the movie. In a year devoid of good family films, ANASTASIA stands out as an entertaining, moral movie that we should support.