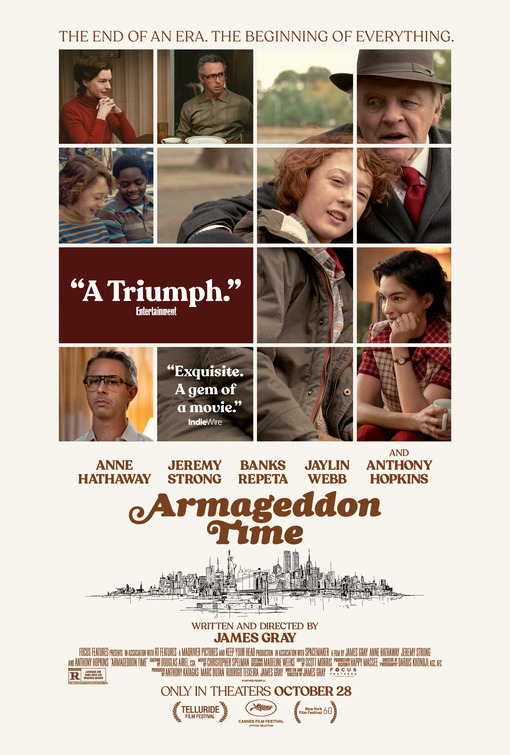 ARMAGEDDON TIME is an autobiographical drama by James Gray. It depicts about three months out of Gray’s secular, liberal Jewish family’s life in 1980 in New York City. The story focuses on a spoiled, rebellious young teenage boy named Paul. Paul gets in trouble at school, where he befriends a black student named Johnny who has no support at home. The two boys start acting up in class. One day, they both get into so much trouble that Paul’s parents transfer him to their eldest son’s private school. Meanwhile, Paul helps Johnny avoid social workers trying to place him into the foster care system.

(HH, APAPAP, PCPCPC, CoCoCo, B, LLL, VV, S, DD, MM):
Dominant Worldview and Other Worldview Content/Elements:
Strong humanist worldview with very strong Anti-American, politically correct, Neo-Marxist elements about a spoiled, rebellious, struggling young teenage boy in a secular liberal Jewish family in New York City who befriends an orphaned, rebellious black teenage boy (movie ultimately has a distorted and negative view of America as being run by bigoted elites), mitigated slightly by an anti-racist theme that has a compassionate view of the victims of racism, though the movie implicitly adopts the Neo-Marxist, Anti-American, politically correct, false attitude of Critical Race Theory
Foul Language:
About 27 obscenities (about 10 “f” words), six GD profanities, one Jesus profanity, seven light profanities, white teenage boy says the “n” word, and a white teenage girl uses an obscene gesture
Violence:
Brief strong and light violence includes a father angrily whips his rebellious son with a belt in one scene after the boy gets caught smoking marijuana at school and mother grabs the boy’s cheeks after the meeting with school officials to give him an angry but necessary talking to and reality check
Sex:
Brief sexual reference in a rap song
Nudity:
No nudity
Alcohol Use:
No alcohol use
Smoking and/or Drug Use and Abuse:
Brief tobacco smoking and two sixth-grade boys are caught smoking a marijuana cigarette in a restroom and are punished; and,
Miscellaneous Immorality:
Stealing, teenage rebellion, Jewish mother and maternal grandfather spoil the mother’s young teenage son, and racism but strongly rebuked.

ARMAGEDDON TIME is a well-acted, meticulously crafted autobiographical drama by James Gray about three months out of his secular, liberal Jewish family’s life in 1980, when he was in sixth grade, got into trouble at school and befriended a black student who only had his Alzheimer’s-ridden grandmother to take care of him at home. ARMAGEDDON TIME is based on the writer/director’s own life, so it’s virtually impossible to dispute the creator’s personal experiences depicted in the story, but the movie has a strong humanist, godless worldview that presents a negative, distorted, politically correct view of American society, including lots of strong foul language and attacks on President Ronald Reagan and President Donald Trump’s family, specifically Trump’s father and older sister, depicting them as out-of-touch, “privileged” white elitists.

The boy in the story is named Paul. He’s a spoiled, rebellious teenage boy who’s about to enter sixth grade at Public School 173 in New York City in 1980. His secular, liberal Jewish family is led by his mother, Esther, a home economics teacher and president of the PTA, and his father, Irving, the son of a plumber and an engineer. Paul’s maternal grandfather, Aaron, dotes on the boy. Aaron was born in Liverpool, England because Aaron’s mother fled Russia after some Cossacks murdered her parents. Paul doesn’t get along with his older brother Ted, who goes to a fancy private school in Queens called Kew-Forest, paid for by Aaron and his wife. Also, he’s rude to his mother and disruptive during the family’s dinner time, even when Paul’s grandparents are there. Paul wants to be an artist when he grows up, but his father advises him to have something to “fall back on,” like computer graphics.

On his first day of school, Paul gets into trouble for drawing a picture of the teacher, Mr. Turkeltaub, where the teacher has the body of a turkey. Johnny, the lone black boy in the class, sticks up for Paul, and they become fast friends. However, they also start acting up in class and using profanity against the teacher. Also, when the class visits the Guggenheim Museum, Paul and Johnny leave, but there are so many children in the class that they get away with it. In other words, the movie doesn’t shy away from depicting Paul and Johnny as a couple of jerks.

Things come to a head when Paul and Johnny are caught smoking a marijuana reefer in the boys’ restroom at school. As a result, Paul’s parents transfer him to his brother’s fancy private school, with financial help from Paul’s grandfather and grandmother. Meanwhile, Johnny starts dodging the social workers who put his grandmother into a nursing home and are trying to put Johnny into the foster care system.

Paul figures a possible way out of their predicament. However, their plan, which involves stealing, doesn’t go the way they expected it to go.

ARAMAGEDDON TIME is well acted. Also, the movie’s presentation of the period, is meticulously crafted.

However, the movie has a strong humanist, godless worldview. Neither the parents nor the school officials stop to think that maybe Paul and Johnny need to be raised with overt godly, biblical values. This is a big problem in the United States among secular, liberal Christians and, in the movie’s case, secular, liberal Jews. Of course, the Writer/Director behind this autobiographical movie himself seems not to have strayed from the secular, liberal atmosphere of his Jewish upbringing.

Consequently, a big part of the movie’s humanist, godless worldview is its negative, distorted, politically correct view of American society. The wealthy private school in the movie is depicted as a privileged, white, racist place full of disingenuous, wealthy, privileged, racist white kids. Also, the movie shows that President Donald Trump’s father, Fred Sr., a wealthy realtor, and Trump’s older sister, Maryanne, a federal judge, were big supporters and donors to the school. The movie has scenes depicting both of them speaking at the school. The movie depicts them as being totally oblivious to the racist attitudes in many of the white students that Paul encounters at the school and that the director himself says he encountered there. Also, Maryanne talks to the students in one scene about hard work being the key to success. She also says that, because of hard work, the school produces many leaders in society. However, the movie also clearly says that she’s oblivious to the “real reason” for this success, which is that the students are all part of a privileged, racist class of rich white people.

The movie’s godless, politically correct worldview is mitigated slightly by its anti-racist theme, which takes a compassionate view of the victims of racism. That being said, the movie seems to implicitly adopt the false Neo-Marxist, Anti-American, politically correct attitude of Critical Race Theory. It thus promotes the Neo-Marxist idea that America is “systematically racist.” Critical Race Theory has been thoroughly and factually debunked by many conservative scholars and journalists.

ARMAGEDDON TIME also has a fair number of “f” words and some strong profanities. There is also a brief, light reference to sexuality in a rap song. In addition, in one scene, Paul’s father whips him with a belt.

All in all, therefore, ARMAGEDDON TIME is an abhorrent, politically correct movie. It’s virtually impossible to dispute factually the writer/director’s personal experiences depicted in the story (they are what they are). However, he apparently hasn’t outgrown the false secular, liberal background with which he was raised. He also hasn’t been acquainted with the facts that it’s our godless, anti-biblical society and its big government social welfare state that is the real problem behind many of America’s ills.