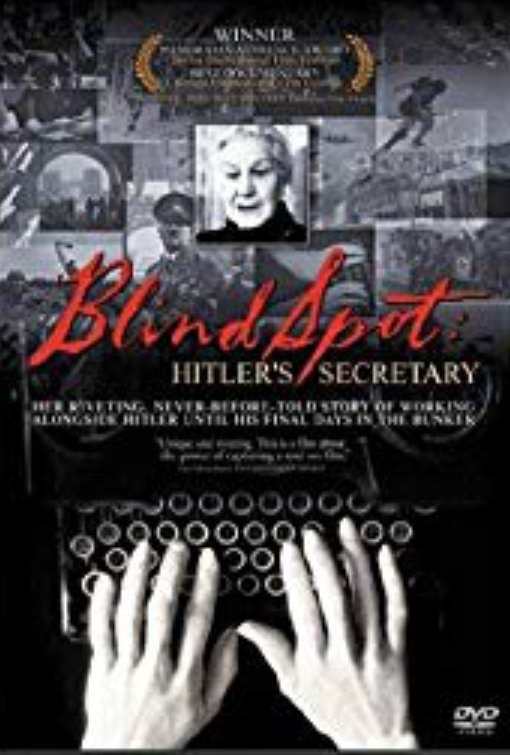 BLIND SPOT: HITLER'S SECRETARY is a 90 minute, straightforward, no special effects, plain interview with Traudl Junge, the secretary of Adolph Hitler. With no overt objectionable content, the movie is fascinating, not for what Frau Junge describes, in an incredible display of total recall, but with what the viewer tries to discern between the lines of her interview.

(B, L) Moral worldview; one light obscenity; no sex, violence or nudity; and, nothing else objectionable.

BLIND SPOT: HITLER’S SECRETARY is a 90 minute, straightforward, no special effects, plain interview with Traudl Junge, the secretary of Adolph Hitler. The movie is fascinating, not for what Frau Junge describes, in an incredible display of total recall, but with what the viewer tries to discern between the lines of her interview.

Her interviewer, who is not seen in the movie, is André Heller, who says, “My father was among the Jews who were arrested immediately when the Nazis invaded Austria in 1938.” He adds, “Two years ago, when it became apparent that, after 55 years, Traudl Junge, the private secretary of the man who must have been the worst criminal in the history of the world, was prepared to tell her story on camera for the first time – to me of all people – I was virtually reduced to a state of shock. . . . I couldn’t help wondering what my father would have said about the whole situation.” Mr. Heller goes on to explain that he is not a judge, a historian or a journalist, but just an artist. He took this confession from one of the closest associates to Adolph Hitler.

Frau Junge kept silent for 55 years after the death of Hitler, Eva Braun and some of Hitler’s close associates in the bunker where they all resided in Berlin. Then, in 2001, just before her death of cancer, she gave this long interview to André Heller. Heller condensed the 10 hours into a 90 minute movie, renouncing all forms of stylistic embellishment.

Frau Junge must have been an incredible secretary. Her recall is so precise. Of course, when Hitler was looking for a secretary, he chose the most attractive, with the best skills. Frau Junge says Hitler was a grandfatherly figure to the young female staff. That, although he was kind, he was almost asexual and non-erotic. She says that she was not political, and that Hitler did not talk much about the politics, or the Jewish situation, to her. When she found out after the war what had happened, she carried the guilt with her for years and gave the interview to excuse herself and confess her sins.

Behind the barrage of detailed memories of each moment of each day, there are a few insights. Frau Junge remembers that Hitler talked briefly about the Jews and the Bolsheviks, and the fact that the West did not understand that Germany was the front line of defense. Frau Junge explains that Hitler said that after the war, if the Nazis lost, all the German men would be castrated and all the women raped. When she was captured by the Americans and found out how generous they were and how much they loved freedom, it caused her to not just renounce Hitler’s apocalyptic vision, but to hate him for lying to her and abandoning her.

How Hitler convinced so many people to adopt his warped vision of reality is not answered in this movie, but the question becomes even more important in the light of this intelligent woman’s experiences. One gets the feeling, although no one will ever know, that she rehearsed this confession for the entire 55 years she kept quiet. If one has a suspicious nature or believes man is fallen, one would wonder what she has not told André Heller about what she knew.

In all of her time with Hitler, Frau Junge has only one blank spot – the moment after he married Eva Braun, they shot themselves, his body was burned, and when the very young Goebels’ children were murdered in the bunker. She says she can’t remember anything, so the question arises, was she an accomplice? Although she claims to have not known what was going on outside the bunker, or even during the years before while working at Hitler’s various residences, she does relate certain tidbits that suggest she knew more than she lets on in this interview. Soon after she was captured, the Americans decided she was not political and let her go. One can only wonder.

There have been several recent television programs and movies about Hitler. Some have portrayed him as a brilliant devil, others, like MAX, have shown him as a buffoon. This movie portrays him as a man who thought of himself as a genius, who was kind to those around him, and who could impose his will to manipulate the conscience and the will of millions of people, which is incredibly frightening.

There is no sex, violence or nudity in BLIND SPOT. There are a couple of “Thank Gods” and one light obscenity. There is discussion that Hitler was non-erotic, but not in salacious terms, and some references to the Jews and Bolshevism. It is very strange, therefore, that BLIND SPOT received a PG. Frau Junge’s confession that Hitler was a criminal and her rejection of everything he advocated is clear, so there seems little chance that anyone seeing this documentary would get caught up in Hitler’s warped vision.

This movie is a small piece in a larger puzzle, with the whole puzzle describing one of the worst events in human history. It is an unfinished puzzle, just as the story of Mao, Stalin, the French Revolution, and other heinous events are incomprehensible, because of a lack of complete evidence. We can only pray that people reject the next world leader who portrays himself as mankind’s savior, while realizing that people are very susceptible. As Benjamin Franklin said, “Men will ultimately be governed by God, or by tyrants.”