"All Superheroes Have a Beginning" 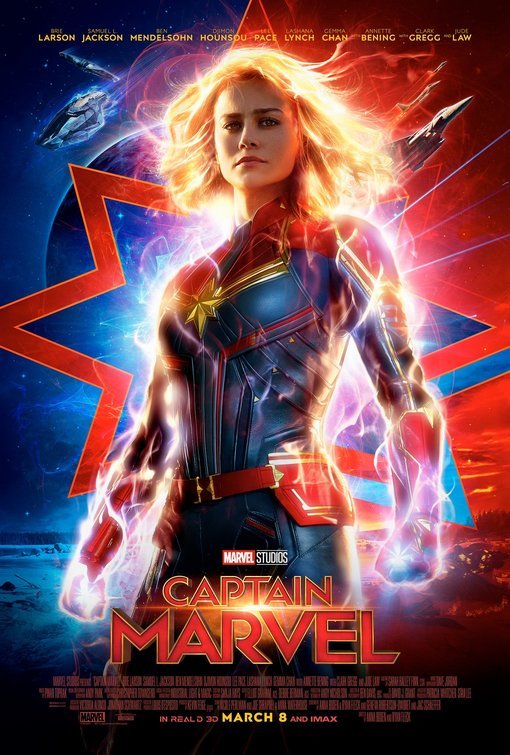 CAPTAIN MARVEL is a superhero movie about a woman enhanced by special alien technology. The movie opens with Carol Danvers in outer space helping the Kree defeat the evil Skrulls, a shapeshifting race. Carol’s haunted by unexplainable dreams and often confides in her trainer. A battle with the Skrulls doesn’t go as expected, and Carol’s taken hostage. The Skrulls look into Carol’s brain to retrieve some memories she has. She wakes up, fights them and steals one of their jets. Landing on Earth, Carol is met by Nick Fury. Fury chases both her and the Skrulls. Fury and Carol pair up to find a woman who’s got the energy power that can stop the Skrulls from destroying Earth.

CAPTAIN MARVEL is highly entertaining, but the plot’s a little convoluted. It has a strong moral, redemptive worldview promoting sacrifice and helping others. The movie also presents a positive depiction of family and stresses the importance of families being together. The movie’s positive worldview is slightly clouded by negative ideas about a supreme being. Overall, however, CAPTAIN MARVEL is an uplifting, entertaining movie.

(BB, CC, Ab, PP, LL, VV, A, M):
Dominant Worldview and Other Worldview Content/Elements:
Strong moral worldview with moral, redemptive themes of friendship, sacrifice, reconciliation, and pursing truth with a negative portrayal of a powerful being that slightly clouds the movie’s Christian, redemptive elements, but with some positive comments about the chance to fight for the good and right, plus some strong American values
Foul Language:
13 obscenities and three profanities
Violence:
Lots of action violence includes aliens and human heroine engage in physical combat, firearms used, some instances where alien or human blood is shown but not too graphic, alien shape-shifter looks like an old woman, and there’s a scene where the heroine fights the old woman (who is really an alien, though children may get confused), woman punched in the face, cat scratches a man’s eye, and there’s a scary alien character that eats things
Sex:
No sex but there’s an implied joke about male private parts
Nudity:
No nudity
Alcohol Use:
Scenes in a bar with drinking depicted
Smoking and/or Drug Use and Abuse:
No smoking or drugs; and,
Miscellaneous Immorality:
Lying, anger, greed, revenge occur, plus an antiwar message may bother some viewers.

CAPTAIN MARVEL is a superhero movie about a woman with special powers who fights against a race of alien shapeshifters trying to destroy Earth. CAPTAIN MARVEL is a highly entertaining movie with positive moral elements promoting family, sacrifice and service, but the plot is a bit convoluted, there’s some foul language and lots of action violence, and a supreme being mentioned in the movie turns out to be a control mechanism that can be used for evil.

Carol is haunted by her unexplainable dreams and often confides in her trainer, Walter Lawson. Walter believes Carol can focus her powers and contain her emotion in order to fight her best. When they are confronted with the war with the Skrulls, they go in to battle. The battle doesn’t go as expected, and Carol is taken hostage. The Skrulls take her to their ship and examine her brain to find some memories she has. She wakes up, fights them and steals one their jets.

Landing on earth, Carol is met by Nick Fury, who chases both her and the Skrulls. When a Skrull is taken down while in Nick Fury’s car and turns back to his green self, Fury finally believes there are aliens. Fury follows Carol, and the two pair up to find a woman who has the energy power needed to stop the Skrulls from destroying Carol’s home planet.

Overall, CAPTAIN MARVEL is a well-made movie, with plenty of jokes and excitement along the way. This movie ties in the franchise quite well, delivering some hope to the upcoming movies. For Marvel fans, there are nice little touches of character development that correlates with the other movies along with a touching tribute to the late Stan Lee. Despite this, the plot is a bit convoluted. Even so, the movie is highly entertaining. Viewers will enjoy the banter between Brie Larson, who plays Carol, and Nick Fury, played by Samuel L. Jackson.

CAPTAIN MARVEL has a strong moral, redemptive worldview. It stresses the importance of sacrifice and helping others. The movie also shows a positive depiction of family and the importance of families being together. There may be some underline political tones that some audience members may pick up, but most viewers may not even notice them. The movie also is very much against war, and one of the main themes is about ending war in general.

On a negative note, the movie mentions the idea of a supreme being. This being is supposed to be whatever each individual respects to the highest degree. When speaking with the supreme being, the person will see the person they respect. Ultimately, [SPOILER] the supreme being ends up being a control mechanism used by the evil forces. This puts into question the purpose behind adding this element to the story, as if an intentional humanist commentary against organized religion is intended. This may be reading more into the movie than is really there, however.