"A Visceral Portrait of the Drug War" 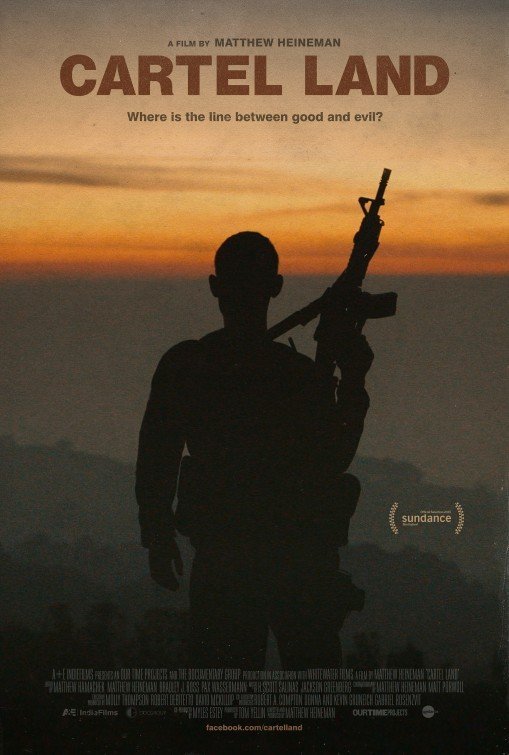 CARTEL LAND is a gritty depiction of a world where anarchy reigns, and even those who seek justice are prone to corruption if they operate without laws. A small town Mexican doctor and a grizzled American veteran lead their own style of militia to combat a common enemy: the Mexican drug cartels. The American veteran leads a daring patrol along the Arizona border, aiming to keep corruption at bay, while the Mexican doctor sparks a full-blown revolution in the heart of the drug war.

Beautifully filmed and masterfully edited, CARTEL LAND is a visceral portrait of life and war along America’s southern border. The movie’s tone is quite dark and sometimes very bleak. Themes of justice and corruption are woven throughout the movie. The small filmmaking team braving these depths is worthy of every accolade. The feat of capturing single events in multiple places, from multiple angles, is enough to boggle the mind. CARTEL LAND has graphic and disturbing images. Those images in CARTEL LAND, as well as its very strong violence, lots of foul language and miscellaneous immorality, warrant an extreme caution.

(BB, CC, FR, O, LLL, VVV, S, N, A, DD, MM) Strong moral worldview of the drug war along America’s southern border, with some overt Christian content, includes main subject’s father thanks God his son is okay, various themes of sacrifice, self-preservation, corruption, justice, the price of justice, morality and moral accountability discussed throughout, cartel members say they’ll make drugs as long as God allows, numerous images of crucifix’s being worn on necklaces and hanging from rearview mirrors, but some false religion, including occultism, such as main subject wears Freemason’s ring, and main subject cheats on his wife citing astrology and horoscopes; more than 50 obscenities and profanities, plus phrase used three times referring to male genitals implying that a person has courage; very strong violence and disturbing images includes young girl with burn scars on forehead, village people mourning over a mass gravesite as numerous people including children are buried as victims of the cartel’s wrath, graphic picture on a cellphone of severed human heads, extensive and graphic descriptions of all violent crimes committed by the cartels against innocent victims, such as murder, torture, rape, etc., video footage of masked cartel members pointing guns at two bound and kneeling boys, graphic and disturbing pictures of hanging corpses and severed heads left on doorsteps, more graphic descriptions of various ways cartels torture and kill people, capture and beating of two cartel members as they are arrested, various outbreaks of heavy gunfire, various guns are prominently featured in nearly every scene, violent skirmishes and gunfights throughout, distressed girl threatens to kill herself with a knife if her father is taken from her, dead body on ground with large pool of blood spilling out; implied oral sex with mistress, main subject’s wife reveals he has always had affairs; upper elderly male nudity in a pool; alcohol use; light smoking, the main subject is about fighting the Mexican drug cartels, and an instance of several pounds of numerous confiscated drugs spread out all over tables; and, massive corruption but much rebuked and vigilante activity but against great evil.

In CARTEL LAND, a brave documentary filmmaker gives the audience a gritty first person perspective as he follows the parallel struggles of two separate vigilante groups as they combat the crimes and corruption of the Mexican drug cartels from opposite sides of the border.

CARTEL LAND begins with a small crew of Mexican drug cartel members cooking crystal meth in the wilderness. Under the cover of darkness, they begin mixing the various chemicals as one masked man speaks to the camera about how they wouldn’t be doing this if they had come from more privileged lives. They make illegal drugs out of necessity, he says. The leader then comments that they will continue making drugs as long as God allows.

In the next scene, the movie introduces Tim “Nailer” Foley, an American veteran and vigilante who guards his area of Arizona on the Mexican border known colloquially as “Cocaine Alley.” Tim, along with a small paramilitary group called the Arizona Border Recon, ardently seeks to combat the influence of the drug cartels leaking into the US, despite lack of support and plenty of criticism. He says the critics don’t know how dangerous it really is down there, and that “vigilantes” used to be ordinary people protecting their towns together against outlaws.

The scene shifts to a mass burial scene where villagers describe the horror that was inflicted on a family of field workers by the Knights Templar cartel when a farmer couldn’t pay his debt to them. A woman being interviewed conveys that, sadly, this is life as usual for the people of the state of Michoacán. She tearfully states that all they want is justice.

Vignette number four introduces Dr. Jose Mireles, a small town medical doctor who turns out to be the main subject of the movie. Dr. Mireles practices firing a rifle because the cartels beheaded his neighbors. This is illustrated by a disturbing image on his cellphone, a photo taken of the severed heads belonging to his neighbors. He says it’s only a matter of time before they come for him next. What would you do? he asks. Wait to be killed, or learn to fight?

From here the movie splits into two distinct story lines, that of Dr. Mireles and his Autodenfensas fighting the cartels in Mexican towns, and that of Nailer and his Arizona Border Recon holding the last line of defense between the cartels’ drug runners and the border into the States. The main arc follows Dr. Mireles as he rallies village elders and leaders together to form the Autodefensas, a militia of civilians banded together to take back the corrupt cities that the cartels have controlled and terrorized for too long.

Technically speaking, the movie is spectacular, especially taken into account that it is real life action and drama unfolding before your eyes with real people, not actors with scripted scenes and choreographed movements. The visual language established almost immediately is very bold and artistic, stressing natural light and color palettes that enhance what could easily have been a visually drab environment. The sound is also dynamic, again rendered even more impressive considering the filmmakers were running around in real war zones and following real people through their real day-to-day lives. The feat of capturing single events in multiple places and from multiple angles is enough to boggle the mind, let alone the skill it would take to edit all of it into a coherent and understandable storyline, all while communicated in Spanish.

The tone of CARTEL LAND is quite dark and at times very bleak. Themes of justice and corruption weave in and out throughout as Mireles, Nailer, the cartels, the Mexican government, and the people on every side wage war against each other to impose various shades of justice or tyranny over all. The whole story may be summarized best by a quote in the movie, “If law or government is crooked, how far do we need to bend to straighten out before warping in the opposite direction?”

The intense violence portrayed, along with frequent obscenities, warrant a very strong caution to all viewers. CARTEL LAND is a visceral portrait of life and war on America’s southern border, and presents its subjects in various shades of grey, where no one side is totally good or evil.