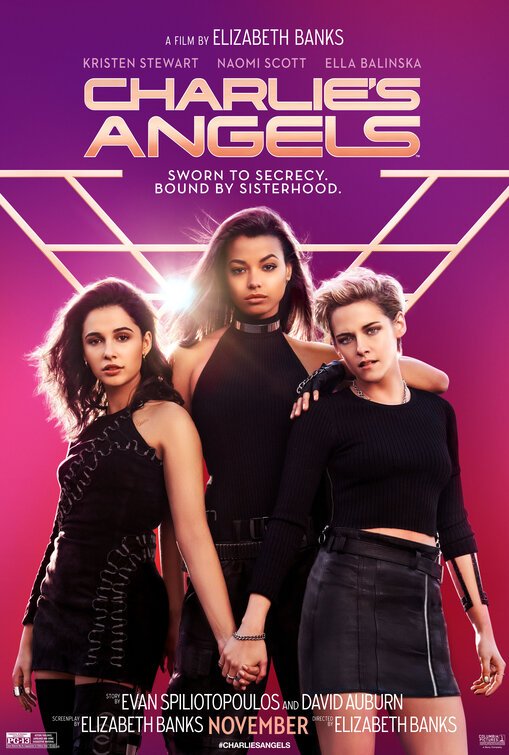 CHARLIE’S ANGELS (2019) are back, this time assigned to protect a young female engineer who’s blown the whistle on corruption at the tech company where she works. She’s developed a device called Calisto, a form of energy that can replace the traditional power grid. However, the device can be weaponized, and her superiors are taking it to market before she can fix this flaw. Of course, many buyers want this technology for nefarious purposes. She joins with the angels to keep evil people from acquiring it.

This CHARLIE’S ANGELS (2019) is a reboot of the franchise. This time around, it’s directed and written by Actress Elizabeth Banks. As a result, the movie takes more of a humorous turn. It’s also much less sexualized. The new CHARLIE’S ANGELS movie portrays the characters as smart, strong women who can use those talents to achieve success. There is quite a bit of violence, but the overall worldview is positive, with good defeating evil, and some positive role models for teenage girls. That said, CHARLIE’S ANGELS warrants extreme caution for its foul language, action violence and light homosexual allusions.

(BB, FeFe, Ho, LLL, VV, S, N, A, MM):
Dominant Worldview and Other Worldview Content/Elements:
Strong moral worldview involving female private detectives who work to defeat evil, uncover a plot to kill innocent people, and remain loyal to their values and their desire to defeat the villains, plus courage and teamwork are extolled, with some strong feminist elements as male characters often look down on women and don’t treat them as equals because of their sex, and the movie condemns that sexism (female empowerment is one of the movie’s main themes), plus one of the female detectives slightly flirts with another female in a comical manner so the movie includes some light homosexual allusions
Foul Language:
21 obscenities (including one “f” word in a subtitle), 18 mostly light profanities, an use of the middle finger, two vulgar insults, depicted vomiting
Violence:
Strong, sometimes intense action violence with minimal blood includes hand to hand combat with punching and kicking and smashing into glass and other objects, many scenes with gunfights, people are shot with tranquilizers and bullets, explosions occur, a man is shown in a close up being shot directly in the side of the head, many explosions send people flying, one instance where a man is killed because of an electrical power burst, a man is known to be sucked into a rock crushing machine but not shown, a girl bites a man’s ear, and it’s shown bleeding, a man’s leg is sliced with a knife, a brief scene where woman is shown to place her foot in a man’s crotch region, a man falls over a balcony and is pierced through the torso by an ice sculpture, mild to moderate amount of blood shown throughout
Sex:
Some light sexual comments and innuendos, a woman uses her sexuality in an obnoxious way to corner a male villain in one scene, and some homosexual allusions when one Charlie’s angel sometimes flirts with men and with a woman, mostly in a comical manner
Nudity:
Upper male nudity shown while a man is dancing, one angel is shown wearing rather short shorts on a few occasions, and one very brief shot of a girl surfing in a bikini, but nothing sexually explicit
Alcohol Use:
Characters occasionally have alcoholic drinks at dinner or at a large party
Smoking and/or Drug Use and Abuse:
No smoking or drugs; and,
Miscellaneous Immorality:
Some moral relativity as heroines occasionally break the law in order to complete their mission (for example, cars are stolen multiple times to keep up with the villain the heroines are pursuing), examples of corruption and greed (some antagonists are very evil and some are just in it for the money, but apathetic about what will happen to innocent people), woman is kidnapped and forced to program a machine to kill people, kidnap victim is also forced to wear a collar and a leash.

CHARLIE’S ANGELS (2019) are back, this time assigned to protect a young female engineer who’s blown the whistle on corruption at the tech company where she works, which makes her a target for those who wish to weaponize a device she’s invented. This CHARLIE’S ANGELS movie is a less sexual, funnier take, with a strong moral worldview of stopping a murderous plot by the villains, but extreme caution is still advised for the movie’s foul language, some intense action violence and light homosexual allusions.

CHARLIE’S ANGELS begins as one angel, Sabina, defeats yet another criminal, using her charm, wit and, of course, intense combat training. Sabina’s soon congratulated by Bosley, the name for many people who work with female investigators at the Townsend Agency.

Meanwhile, Elena Houghlin is an engineer who has worked on a new project called Calisto, which is a small device that can create a sustainable force of energy without the traditional use of a power grid. It’s revolutionary, better for the environment, and it’s about to be the hot new item on the market. However, Elena has some concerns about the device that her superiors are ignoring in order to get the device monetized quicker. Regrettably, when there’s a power surge, anyone within a certain vicinity of the device will experience something akin to a brain aneurysm, sending them into a coma or possibly killing them. Elena knows she can correct this error in programming, but there are other people who want to keep it that way. She’s mysteriously given a contact card to the Townsend Agency run by the mysterious man named Charlie.

Elena tells a Bosley from the agency about her device. Suddenly, they are under fire, and Bosley rushes her out along with Sabina, who’s posing as a waitress in a cafe. They are soon in a chase with an assassin trying to kill Elena, but with Bosley, Sabina, and another angel named Jane now protecting her. They are able to get away, unfortunately with a casualty, sending Elena over the edge with confusion and anxiety.

Another Bosley, who’s a female, comes to retrieve them, taking them to a safe haven with their friend, Saint. He provides them with everything they will need for their health and wellbeing, and they find some solace there. However, they begin to realize there must be someone on the inside of the Townsend Agency who knew what their moves were going to be in the first place.

They devise a plan. Elena, along with the angels, will go to her workplace and retrieve all the Calisto prototypes and bring them to safety. However, after they go through jumps and hoops in order to do this, they find that the prototypes are already gone. They figure out that Elena’s boss has taken them all and is planning to sell them to the highest bidder. Now, the girls really have to join together, figure out who the mole is and stop these deadly devices from being sold to evil people.

This CHARLIE’S ANGELS (2019) movie is the third movie reboot of the popular 1970s TV series in recent years. However, this newest version takes a more humorous approach, and gets rid of the unnecessary hyper sexualization of the characters in the past. Although there is some flirting, the angels rely more on their intellect, physical training and wit to accomplish their goals. Besides that, the message is an empowering one to teenage girls, showing they don’t have to rely on sexuality or dumb themselves down. The movie primarily follows a moral worldview about fighting and defeating evil. There is violence throughout, mostly hand to hand combat, with some explosions, gun fights, and many punches. The blood shown is pretty minimal considering the amount of fighting, though, and only a couple scenes are really intense. That said, MOVIEGUIDE® advises extreme caution for the action violence, too much foul language and light homosexual allusions in CHARLIE’S ANGELS. Kudos to the filmmakers for using more humor and making the characters less sexualized and smarter, but they could have done even better.