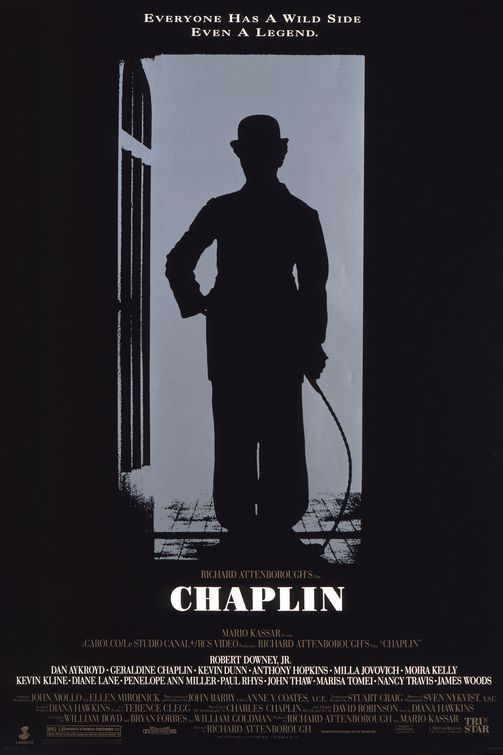 CHAPLIN tackles the extraordinary task of condensing the comic's long life down to 144 minutes. Although CHAPLIN features many fine acting performances, it is marred by implied sexual perversion, nudity, revisionist history, and a slanderous depiction of J. Edgar Hoover and the FBI.

CHAPLIN quite successfully condenses the comedian’s life into 144 minutes. Against the background of the elderly Chaplin (Robert Downey Jr.) being interviewed by a fictitious biographer named George Hayden (Anthony Hopkins), we see: Charlie the toddler steal the Vaudeville stage with a song; the adolescent Charlie reluctantly committing his mother to an insane asylum; young adulthood spent mimicking drunks on stage; and, a fateful trip to America to star in silent shorts made by Keystone Kops director Mack Sennett (Dan Aykroyd). Haunted by the memory of his first love Hetty, Chaplin begins a string of affairs with dark-haired teenagers. This leads to a succession of troubled marriages and divorces. On top of this, Charlie is hassled by FBI head J. Edgar Hoover. Hoover’s merciless hounding leads to Charlie’s exile in Europe, joined by his last bride Oona O’Neill.

CHAPLIN unfolds this troubled artiste’s tale with magnificent style and artistry, and Robert Downey Jr. gives a fine performance. However, CHAPLIN’s reproduction of history runs the gamut between inspiration and deceptive bias. The scenes of Charlie’s early career are the best. The bias of CHAPLIN comes with its whitewashing of Charlie’s Communist involvement and accompanying caricature of J. Edgar Hoover. Although CHAPLIN’s depiction of the Tramp’s active sex life is considerably toned down, there is still quite a lot of female nudity represented.

Producer: William Boyd, Bryan Forbes & William Goldman. BASED ON: MY AUTOBIOGRAPHY by Charles Chaplin & CHAPLIN: HIS LIFE AND ART by David Robinson.