CSA: THE CONFEDERATE STATES OF AMERICA 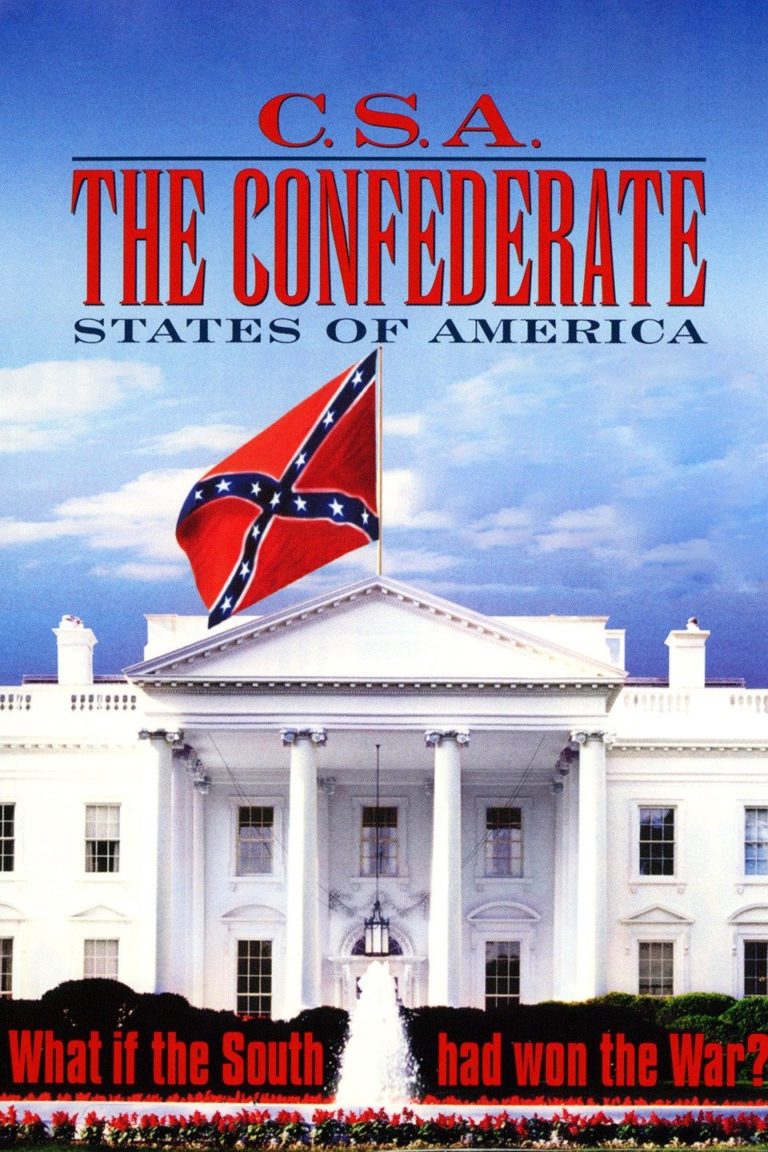 CSA: THE CONFEDERATE STATES OF AMERICA is a mock documentary about the Confederate States of America. The movie creates a history where the Confederates get win the "War of Northern Aggression." The Confederacy is dedicated to establishing a fascist, racist, Aryan, Christian state. This is an extremely bigoted, untrue view of Christianity, by the way. To get the defeated North to buy into the slavery, they tax everyone unless they own a slave. Thus, to get out of taxes, you've got to buy a slave. The Confederate States conquer South America, and Canada becomes the model, Neo-Marxist, anti-racist state. For some reason, the Confederacy never attacks Canada. As this alternate history develops, America makes a hero out of Adolf Hitler.

This repugnant movie filled with racist epithets is so bad that it reminds one of a sophomore drama, full of self-important ideas and with no ability to execute them. The problem may be that the director/writer was unable to laugh at himself. Although racism is abhorrent, it is also clear that the Civil War, not to mention American history, is not as black and white as the director proposes.

(HHH, CoCoCo, RHRHRH, LL, V, S, N, MMM) Extremely anti-all-things-American (both good and bad, and much is bad and needs to be corrected), humanist, Marxist worldview; strong racist perspective where everything is seen through the lens of race, so much so that the movie is racist in itself, plus very strong anti-Christian content, inexorably tying Christianity in with slavery, and even quoting Ephesians 6:5 out of context to defame Christianity, and very strong revisionist history including painting white historical leaders like George Washington, Abraham Lincoln and Robert E. Lee with a broad, deceitful brush; four profanities, one obscenity and many racist slurs, including the "N" word, "coon," "darkie," "jigaboo," and many other disgusting racial stereotypes; pictures of men and women killed and mutilated in the Civil War and descriptions of slaves who were beaten, pictures of hanged slaves; discussions of sex but no sex; shots of upper male nudity and skimpy outfits on females; no alcohol; ; and, politicians lie, president lies, words are put in the mouths of Robert E. Lee and Abraham Lincoln, and very strong reverse racism.

CSA starts with a quote form George Bernard Shaw that if you’re going to tell the truth you better do it with humor or people won’t listen. Regrettably, this Spike Lee movie is neither very funny nor very truthful. Evidently, the writer/director, Kevin Willmott, felt that he didn’t have to be entertaining since he wasn’t going to be truthful.

The movie in fact is a long, tedious, one trick pony pitch turned into a boring docudrama. Even the left-wing audience was squirming in its seat.

That said; let us make perfectly clear that racism is abhorrent. In Christ, there is no black or white, male or female, etc. In other words, in Jesus, there is equality. And God creates us in His image, endowing us with certain inalienable rights.

Furthermore, there are many things that need to be fixed in the United States and among the American people, but, as one professor said, when you compare the United States with other countries, we are much better off here than in most other parts of the world. In fact, in very few other countries can you produce a movie like this one that’s so antagonistic toward all things about the country wherein it was made.

The movie is a mock British Broadcasting Service (as opposed to BBC) documentary about the Confederate States of America. The movie creates a history where the Confederates convinced England and France to come to their aid so they could win the “War of Northern Aggression.” The whole history of the Confederacy is dedicated to establishing a National Socialist (or fascist), racist, Aryan, Christian state (this is an extremely bigoted, untrue view of Christianity). As this alternate history develops, America makes a hero out of Adolf Hitler.

To get the defeated North to buy into the slavery, they tax everyone, unless they own a slave. Thus, to get out of taxes, you’ve got to buy a slave.

The Confederate States conquer South America and make all of them second-class citizens. In their conquest, they kill a lot of people, beat, plunder and rape, most of which is discussed with some black and white photos.

Abraham Lincoln flees to Harriet Tubman, and she puts blackface on him so that he can escape to Canada. Canada then becomes the model, Neo-Marxist, anti-racist state. For some reason, however, the Confederacy never attacks Canada.

In between this alternate, satiric history, that could have been funny with a little genius, there are many commercials that are extremely racist. The commercials sell products such as “Darkie” toothpaste or “Sambo” Oil, or “Coon” Restaurants or “Jigaboo” Cigarettes. The African Americans are always Step-N-Fetch-its, and the whites are always paternalistic. Ads for TV programs feature LEAVE IT TO BEULAH, the black slave who’s clueless no matter how badly she’s treated by her white masters. At the end of the movie, the filmmaker shows some real products that supposedly incorporate these racist products, such as Aunt Jemima Syrup and Uncle Ben’s Rice.

It is incredible that the filmmakers could come up with so many ideas that have promise and execute them all in such a tedious manner. The trailer for this movie is better than the movie. Although it is a spoof, a satire, and a farce, the acting is below par. Some of it is outright embarrassing. As the great acting teacher, Lee Strasberg taught, if you’re going to play a fool, it is not enough just to act foolish.

This movie is so bad that it reminds one of a sophomore drama, full of self-important ideas with no ability to execute them. The problem may be that the filmmaker was unable to laugh at himself. Although racism is abhorrent, it is also clear that not every product advertised for African Americans is racist.

The worst part is the movie’s revisionist history. George Washington is portrayed as the father of slavery and the Confederate States. Lincoln did say some absurd things about slavery, but he grew in office to understand the necessity for the abolition of slavery. People are not static. People mature. If you tar every white leader with racism, then you are yourself being racist.