"Seeking Justice for the Fallen" 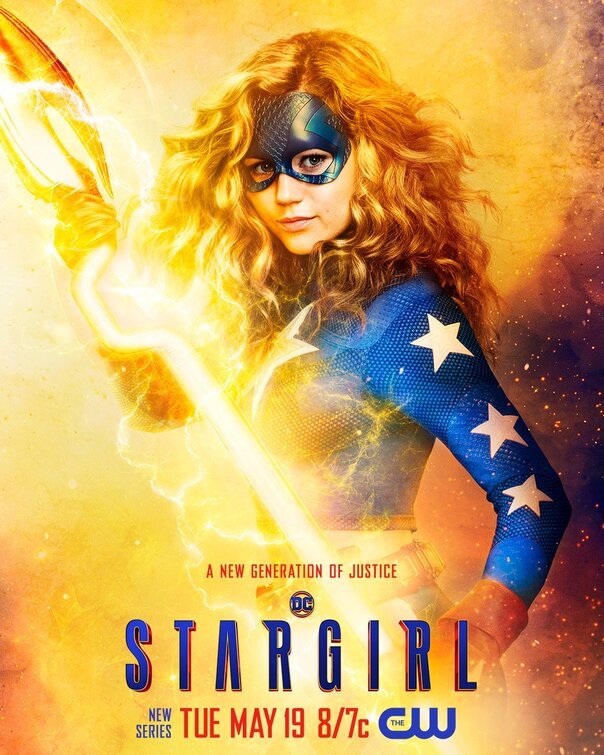 The second episode of DC’S STARGIRL series on the CW network steps things up. After Pat uses his giant robot machine to save his stepdaughter, Courtney, aka Stargirl, from Brainwave, he tells her how he happened to meet her mother in Blue Valley. He assures Courtney he would never have moved the family from Los Angeles to Blue Valley, Nebraska after marrying Barbara if he knew Brainwave was hanging around the town. Courtney is anxious to find Brainwave and discover where Icicle, the leader of the Injustice Society, is, but Pat tells her it’s too dangerous. However, Brainwave has managed to find out Stargirl’s real identity. He makes a terrible threat.

The second episode STARGIRL is more involving and cohesive than the pilot. Its story leads to a strong emotional climax. Justice, family ties and prudence are the three strong moral themes. However, there’s a little more foul language, mostly due to a pop song that’s heard during the epilogue. The second STARGIRL episode also has some intense action violence putting Courtney and Pat’s lives in danger. MOVIEGUIDE® advises caution for older children.

(BB, L, VV, M):
Dominant Worldview and Other Worldview Content/Elements:
Strong moral worldview stresses justice, family and prudence and includes good scenes between mother and daughter and stepfather and stepdaughter
Foul Language:
Seven obscenities (one a** word and six “d” words with three or four in a song on the soundtrack) and two OMG exclamatory profanities
Violence:
Strong and light violence includes supervillain threatens to kill teenage superhero’s mother, giant robot’s fist detaches and hits villain to knock him against an object, man working giant robot throws car and dumpster at supervillain, but villain uses his telekinetic powers to throw them away and tries to crush man in robot between a bus and a car, Stargirl appears with Cosmic Staff and punches villain, but he gets the better of her and knocks her down, a blast from Stargirl’s staff damages the high school’s large marble name plaque, Stargirl uses power from her staff to knock villain into a coma
Sex:
No sex
Nudity:
No nudity
Alcohol Use:
No alcohol use
Smoking and/or Drug Use and Abuse:
No smoking or drugs; and,
Miscellaneous Immorality:
Villain’s son lies to him to avoid telling him he was beaten up by a girl, i.e. Stargirl.

The second episode of DC’S STARGIRL series on the CW steps things up a notch as Stargirl pushes her stepfather, Pat, to go after Brainwave, but Brainwave discovers her secret identity. The second episode of DC’S STARGIRL is more cohesive and involving than the pilot, with stronger moral elements, but there is some gratuitous foul language and intense action violence.

Courtney is anxious to find Brainwave and discover where Icicle is, but Pat tells her it’s too dangerous. What they don’t know, however, is that Brainwave, who’s currently the head doctor at the local hospital, has discovered Courtney’s real identity. At a school open house, he threatens to kill Courtney’s mother if Courtney doesn’t bring him Starman’s Cosmic Staff.

The second episode of STARGIRL is titled “S.T.R.I.P.E.” Before he died, Starman called Pat “Stripesy” because he drove a classic red and white Chevy. At the end of the episode, Courtney gives the giant robot machine that Pat built the nickname STRIPE for Subatomic Tactical Robot Internet Pat Enhancer.

The second episode is more involving and cohesive than the pilot episode. Its story leads to a strong emotional climax. Justice, family ties and prudence are the episode’s three strong moral themes. For example, Courtney wants justice for the members of the Justice Society, including the man she thinks was her father, killed by Brainwave and his cohorts. Also, there’s a heartwarming scene between Courtney and her mother, and Courtney’s bond with her stepfather is growing stronger.

There’s none of the politically correct tone in the second episode that seeped into the pilot episode. However, there’s a little more foul language, mostly due to a pop song that’s heard during the episode’s epilogue. The second episode also has some intense action violence putting Courtney and Pat’s lives in danger. MOVIEGUIDE® advises caution for older children.