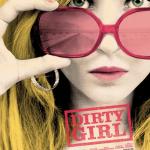 DIRTY GIRL is about a promiscuous, foul-mouthed 16-year-old girl named Danielle. Danielle’s misbehavior gets her banished to a remedial class. The teacher pairs her on a parenting project with Clarke, a fat, nerdy homosexual boy with no friends. Clarke is emotionally abused by his father, who hates Clarke’s homosexuality. Danielle’s determined to get to California to find the father she’s never met. She convinces Clarke to take his father’s beloved Cadillac and help her get to the golden state. Quirky misadventures follow, with the teenagers’ two caring mothers hot on their trail.

DIRTY GIRL has a few very clever jokes. Most of it, however, is designed to promote a politically correct attitude favoring a radical homosexual agenda. In doing that, it actually makes jokes out of a scene showing the teenage boy striptease in front of a bunch of drunken homosexual pedophiles in a bar. Accompanying this outrageous sexuality is plenty of crude foul language and a humanist, feminist subtext against religious morality. DIRTY GIRL is sure to make Movieguide®’s list of the year’s Top 10 Most Abhorrent Movies. As such, it’s also one of the year’s most mindless movies.

(RoRoRo, PCPCPC, HoHoHo, FeFeFe, HHH, LLL, VV, SSS, NN, AA, D, MM) Very strong Romantic, politically correct, pro-homosexual worldview, with implied but very strong feminist attitude because the two manly fathers in the movie are bad guys and the two mothers are the most sympathetic adult characters, plus very strong humanist subtext against lead female character’s potential stepfather, who’s Mormon; at least 49 obscenities (including many “f” and “s” words), 10 strong profanities and seven light profanities; some disturbing violence when angry father goes after homosexual teenage son, plus man cuts his rear end trying to sneak into house through broken window; very strong sexual immorality but not extremely graphic includes implied teenage fornication, it’s implied that male teenager sleeps with young adult male stripper who (the audeince later learns) was paid to do it), young adult male stripper does striptease for male teenager, teenage girl starts doing striptease for older men in a strip bar but then realizes they’re all homosexual so her newfound male teenage homosexual friend does his own striptease for the homosexual pedophiles, some crude sexual comments and jokes, implied phallic joke when mean man washes his beloved car with a hose, and male teenager indicates to his female teenage friend that he sleeps around with the other boys in military school; upper female nudity in one scene; alcohol use and drunkenness in bar scene; smoking; and, teenagers steal a father’s car to take a road trip, man breaks into house but gets arrested, teenagers decide to engage in striptease contest to make money to continue their trip, girl insults people, father ultimately rejects teenage daughter he didn’t know he had, father is emotionally abusive to his homosexual son.

Good scriptwriting is wasted in the new movie DIRTY GIRL, a politically correct, abhorrent comedy about a promiscuous teenage girl who befriends a nerdy, chubby teenage boy who thinks he’s homosexual and is harassed by his mean father. Ironically, the movie clearly shows that homosexuals are also sick pedophiles, but the filmmakers, producers, actors, and distributors fail to make the connection (several scientific studies have shown that homosexually active males are three to four times as likely as heterosexual males to engage in pedophilia).

Set in 1987, the very first scene in DIRTY GIRL implies that 16-year-old Danielle is outside her high school in Norman, Okla. having sexual relations with a boy in a car, which is moving up and down. Soon Danielle is insulting Clarke, the fat, nerdy homosexual boy in her school, and making lewd comments in class. So, she’s sent to a remedial class that just happens to include Clarke. Since she came to the class late, she’s paired up with the friendless Clarke and given an assignment to pretend that a sack of flour is their child and write a journal about taking care of the pretend baby.

While working with Clarke, Danielle learns he’s emotionally abused by his father for being homosexual. With his angry father threatening to send Clarke to military school, Danielle has an easy time convincing him to take his father’s beloved Cadillac and help her get to California to find the father’s she’s never met. A bunch of lewd, comical misadventures follow. Hot on their trail are the two teenagers’ mothers, the only ones who seem to care about these two misfits.

DIRTY GIRL aims to be a crowd pleaser, so it’s full of humorous situations and dialogue. For instance, Danielle has drawn a face on the sack of flower they carry to simulate the pretend baby. As the movie’s mood and the fortunes of the two teenagers change, so do the sack’s lips, from a smile to a frown, or from expressions of fear to ones of distress.

Most of the movie, however, is designed to make the two sex-obsessed teenagers appealing and to promote a politically correct attitude toward homosexuality. It does this by making jokes about such behavior, including letting first the girl, then the boy, striptease in front of drunken men in a bar, men who turn out to be homosexual pedophiles. There’s also a scene where the girl pays a male hitchhiker from Vegas to sodomize her lonely homosexual friend. The mysterious hitchhiker turns out to be a male stripper himself.

If that weren’t enough to offend media-wise viewers, the girl’s real father turns out to have been a coach who got her teenage mother pregnant in high school. Also, of course, the boy’s anti-homosexual father is the meanest character in the movie. Finally, the girl’s potential stepfather, who’s dating her mother, is a Mormon, who’s made to look very goofy, which conforms to the movie’s apparent humanist subtext against religious morality. William H. Macy, however, who plays the Mormon, can’t hide his own inner decency and sincerity. Accompanying this evil content is plenty of crude foul language

When all is said and done, DIRTY GIRL is sure to make Movieguide®’s list of the year’s Top 10 Most Abhorrent Movies. As such, it’s also one of the most mindless movies of the year. It shows that some of the elitists in Hollywood, including many actors, clearly want to indoctrinate your children into promiscuous, perverted and homosexual lifestyles.

Please help Movieguide® fight this evil. The mass media creates the culture that elects the politicians and shapes the hearts and minds of the world’s children, teenagers and young adults, who are leaving churches in droves. If this doesn’t make Hollywood the most important mission field for the Christian Church, what would?