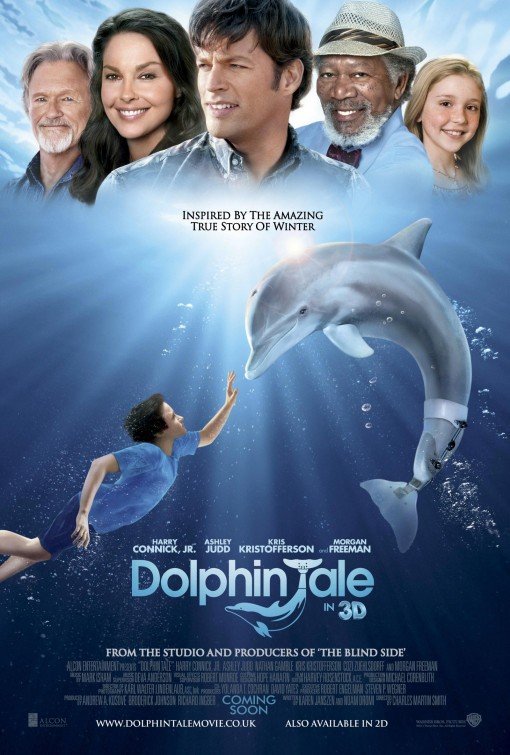 Based on a true story, DOLPHIN TALE is an emotional movie about 11-year-old Sawyer who rescues a beached dolphin that has been caught in a fisherman’s trap. Sawyer is withdrawn because his father left without explanation, and his best friend and college age cousin, joins the Army to fight in the Middle East. Hazel, the 11-year-old daughter of an animal doctor named Clay, is impressed by Sawyer’s rescue of the dolphin, which they name Winter. They try to save Winter, save the Marine Rescue Center and rescue Kyle from his depression.

DOLPHIN TALE is very emotive. Morgan Freeman does a superb job as the doctor who makes the prosthetics for the veterans. Morgan looks at Sawyer’s hand and marvels at God’s design. The movie is directed with incredible, heartfelt moments and some very funny moments. Some of the acting is a little over the top, however. Also, there are a few too many storylines. Regrettably, Hazel prays to her dead mother and asks her father to tell Sawyer the Chumash Indian story that dolphins are people too. All that said, DOLPHIN TALE is a movie that respects life and extols intelligent design.

(C, BB, Pa, FR, L, V, N, M) Light Christian, pro-created life, morally uplifting worldview which is also pro-stewardship of the environment marred by a re-telling of the Chumash Indian pagan story that dolphins are human beings turned into dolphins by a goddess when they fell off the rainbow bridge to paradise and the little girl Hazel prays to her mother instead of God, but a medical doctor talks about the excellence of God’s creation compared to what he can do with prosthetics; two very light obscenities and two “Oh gosh” exclamations; threats of violence, pelican attacks people several times, dolphin gets caught in fisherman’s trap and has bleeding wounds, man goes off to Middle East war and comes back very wounded, several shots of wounded soldiers in veteran’s hospital, several shots of disabled children and adults, powerful hurricane almost destroys marine life hospital in Florida; no sex; men and women in bathing suits; no alcohol; no smoking; and, boy skips school to take care of dolphin and doesn’t tell his mother for a week and boy sneaks into marine animal rescue hospital, but he is rebuked.

Based on a true story, DOLPHIN TALE is a very entertaining and emotional movie about a little 11-year-old boy named Sawyer who rescues a beached dolphin that has been caught in a fisherman’s trap.

Sawyer has two reasons for withdrawing from society. One, his father left without explanation several years ago; and now, Kyle, his best friend and college age cousin, joins the Army and goes off to fight in the Middle East. As a result, Sawyer just spends his time fixing model airplanes. Without ambition, he has been relegated to summer school and is not doing well.

One day, Sawyer rides by the beach in Clearwater, Florida. An old fisherman calls up to him to ask him to use his cell phone to call 911 because there’s a beached dolphin whose tail is in pretty bad shape. Marine Rescue comes. One of the team is a doctor named Clay, and the other is his 11-year-old daughter, Hazel. Hazel is impressed by Sawyer’s rescue of the dolphin, which they name Winter.

The next day on the way back from school, Sawyer sneaks into the Marine Rescue Center and gets caught by Hazel, then Clay. They show him Winter, who seems to have no will to live. When Sawyer touches Winter, she comes back to life, so they believe that the dolphin likes him.

Sawyer starts skipping school to take care of the dolphin. When his mother finds out, she’s furious. She takes Sawyer to confront Clay but then becomes impressed that Sawyer has found something he cares about in life. The question is, can Winter survive?

Her plight is mirrored in the plight of Sawyer’s cousin Kyle, who comes back severely wounded from a bomb blast. Nothing is easy as they try to save Winter, save the Marine Rescue Center and rescue Kyle from his depression.

The good news is that this movie is very emotive. Morgan Freeman does a superb job as the doctor who makes the prosthetics for the veterans and eventually tries to help Winter. Morgan looks at Sawyer’s hand and marvels at God’s design, saying he can’t do anywhere near as well. The movie is directed with incredible, heartfelt moments and some very funny moments. This should make it successful.

Some of the acting is a little over the top, however. Also, there are a few too many storylines to keep up with in the movie, and not all the stories are neatly resolved by the end, but that’s partly because the movie’s based on a true story.

There are some theological problems in DOLPHIN TALE that will disturb Christians. At one point, Hazel prays to her dead mother. This will not bother those who believe in communion of the saints, but it will bother many Evangelicals and even Jews. Secondly, Hazel asks her father to tell Sawyer the story that dolphins are people too. Her father Clay at first says this is not so, but then he relents and tells the Chumash story of the goddess who rescued children who fell from the rainbow bridge to paradise by turning them to dolphins.

All that said, DOLPHIN TALE is a movie on the verge of excellence. It respects life, and it extols intelligent design.