"Humor and Optimism Save the Day" 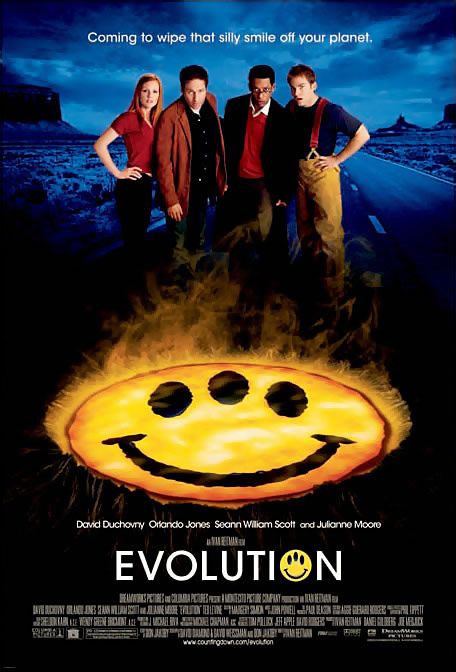 In the science fiction comedy EVOLUTION, David Duchovny, Orlando Jones and Julianne Moore play a trio of scientists confronting a meteorite which bleeds. The bleeding meteorite transforms a cave in Arizona into a primordial environment oozing with life. As the alien creatures mutate into bigger, and more menacing, monsters, the three scientists must learn how to combat the new menace, which threatens to destroy America in a matter of weeks. They get help from a wannabe firefighter named Wayne and a couple of overweight college dumbells.

There are lots of weird creatures and plant life in EVOLUTION, including giant flying dinosaurs, gross-looking earthworms and apes with very sharp teeth. Through it all, Duchovny and Jones joke their way to success. Some of the jokes are sexual, some are gross, but a lot of the jokes are genial, smart-aleck, Bill Murray type humor. EVOLUTION’s romantic worldview and evolutionary elements are mitigated by some positive moral and redemptive qualities, including a comment about the “great, merciful Christ” and a Scriptural exclamation of victory, “With God, all things are possible.” The movie’s sex jokes, foul language and references to evolution require caution for older children, however

In some older science fiction stories, the bad aliens usually land somewhere on the outskirts of the city or in a rural place, but the good aliens go to the nation’s capitol or the United Nations. The new science fiction comedy, EVOLUTION, starring David Duchovny, Julianne Moore and Orlando Jones, follows this time-tested convention, often to hilarious effect.

David Duchovny and Orlando Jones play Dr. Ira Kane and Dr. Harry Block two science professors at a community college in Glen Canyon, Arizona, who stumble upon a meteorite which bleeds. The bleeding meteor has landed in one of the underground caves surrounding the area. Somehow, the blue goo oozing from the rock has started breeding small alien forms of life, including insects and fauna. Soon, however, the alien creatures are mutating at a rapid pace, turning into ever bigger, and nastier, creatures.

The U.S. military catches wind of what’s happening by bugging the computer of Ira, who used to work for the military until an anthrax vaccine he created went haywire. The military, led by Ira’s nemesis, General Woodman, kicks Ira and Harry off the project, with help from an attractive, but klutzy, scientist named Allison, played by Julianne Moore. Of course, everything gets out of control very quickly, and it’s up to Ira, Harry and Allison to save the world from destruction. They get help from a wannabe firefighter named Wayne and a couple of overweight college dumbells.

There are lots of weird creatures and plant life in EVOLUTION, including huge wasps, giant carnivorous flowers, creatures who look like a cross between a turtle, a slug and a dog, giant flying dinosaurs, gross-looking earthworms, and apes with very sharp teeth and clubs. Through it all, Duchovny and Jones joke their way to success. Some of the jokes are sexual, some of the jokes are gross, but a lot of the jokes are genial, smart-aleck, Bill Murray type humor. This makes sense considering that the director of EVOLUTION is Ivan Reitman, who made Murray a star with STRIPES and GHOSTBUSTERS in the early 1980s. It was nice to see the cast create the same kind of comic energy in EVOLUTION that enervated those two earlier movies, even though all three movies have moral and theological problems. A cameo by Dan Aykroyd (like Murray, also a former Saturday Night Live star of the 1970s) adds to the comfortable sense of nostalgia permeating EVOLUTION. This movie may not star Bill Murray, but his spirit hovers over it, in the form of Duchovny and Jones.

The title to this movie gives a clue to its thematic content. Thus, EVOLUTION contains solid elements containing an evolutionary worldview. Characters express surprise at the rapid “evolution” of the creatures in the meteorite’s original cave. At first, the creatures cannot stand the oxygen of the outside world, but eventually they “adapt” and “evolve.” This worldview, of course, undermines the biblical view of Creation by a personal, transcendent, moral God who wants to have an intimate fellowship with human beings. The movie conveniently avoids showing viewers, however, one of the species of creatures actually “evolving” into a new, entirely different species. This problem of species evolution has always been the achilles heel of an evolutionary worldview. That’s why Intelligent Design and Creationism, in their various forms, have provided a far better explanation than evolution for the complexity of life on Planet Earth.

Surrounding these evolutionary elements in EVOLUTION is a dominant romantic worldview. The movie’s dominant worldview elevates the ability of man to solve any problem confronting him, as long as he has a good heart and a sense of humor. Combined with this worldview are elements of heroism, which help give the movie some positive moral and redemptive qualities. Interestingly, Dan Aykroyd makes an exclamatory appeal to the “great merciful Christ” at one point in the movie. Even more interesting, however, Orlando Jones’ Harry Block character exclaims, “With God, all things are possible!” during the point of highest victory over the alien life forms.

It’s been many years since Susan Sontag, a social critic who once said that “socialism is just fascism with a smiling face,” wrote an influential article titled “The Imagination of Disaster.” In that article, she said that many science fiction movies imagine the possibility of worldwide destruction and tell how different people cope with such a possibility. With EVOLUTION, her article is no less true now than when film professors began to use it in the 1970s and early 1980s. The protagonists in EVOLUTION deal with the possibility of worldwide destruction with plenty of good humor and can-do American optimism. That may be the movie’s biggest legacy, as well as the biggest legacy of director Ivan Reitman’s career.

Despite EVOLUTION’s positive qualities, however, its sex jokes, foul language and references to evolution require parental caution for older children.