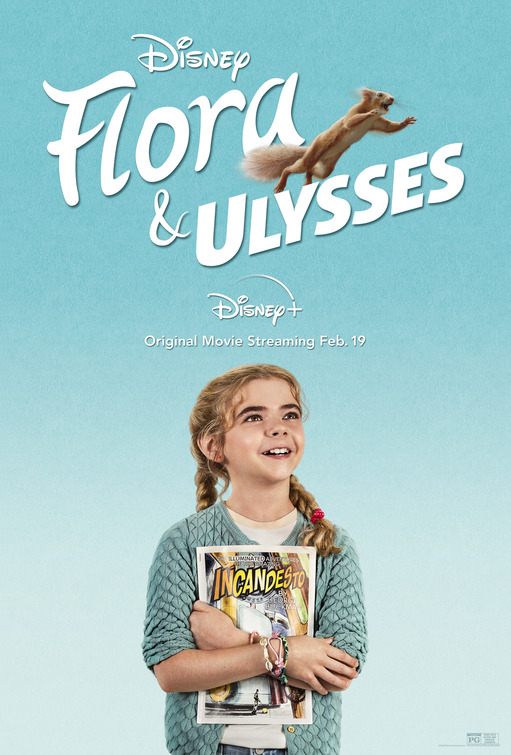 FLORA & ULYSSES is a family comedy streaming on Disney Plus. Flora, a 10-year-old girl, is upset because her parents have separated. Her father can’t find anyone to publish his superhero comic books. With her father out of the house, Flora’s mother, a successful romance novelist, has lost her romantic muse. As a result, she’s developed a severe case of writer’s block. One day, Flora revives a squirrel who was hit on the head and sucked up by a rogue vacuum cleaner with artificial intelligence. The incident gives the squirrel superpowers and the ability to understand human language. However, a mean animal control officer is after the squirrel, because a crazy waitress thinks the squirrel has rabies.

FLORA & ULYSSES is cute, touching and funny. As Flora, Matilda Lawler does a bang-up, energetic job. She makes this crazy story work. FLORA & ULYSSES has many positive messages about hope, purpose and family. This positive content is marred by several humanlike references to “the Universe.” FLORA & ULYSSES also contains some slapstick comedy and lying. So, MOVIEGUIDE® advises caution for younger children.

(BB, FR, V, M):
Dominant Worldview and Other Worldview Content/Elements:
Strong moral worldview where hope conquers cynicism, hope brings a family together, title character says, “We found wonder and magic in the people we love,” and title character repeatedly promoted the idea of finding a purpose to one’s life, marred by a few references to “the Universe” that seem to replace God, and a couple of references to expanding the universe, but also in a figurative sense as in someone “expanded my universe”
Foul Language:
No foul language
Violence:
Some comical slapstick and adventure violence includes girl riding a bicycle in the park gets bonked on the head with a flying volleyball, a vacuum cleaner with artificial intelligence goes bonkers, vacuum cleaner hits tree and causes a squirrel to fall out of the tree and get bonked on the head with a nut he was carrying, vacuum cleaner sucks up the injured squirrel, but people are able to shut down the vacuum cleaner and save the squirrel, girl massages squirrel’s heart and gives him mouth-mouth resuscitation to revive him, boy falls down repeatedly, startled and scared and frantic squirrel wrecks a donut diner, squirrel accidentally breaks the large donut sign outside the diner, man’s arm hit with tranquilizer dart and then tries to drive a car, man driving an animal control van tries to chase the man driving the car, right rear door of man’s car is hit and falls off, squirrel jumps on top of chandelier, and the chandelier crashes onto a large bowl of mashed potatoes on the dining table, people sitting at the dining table are splattered with flying mashed potatoes, dining table breaks, animal control officer hits man with multiple tranquilizer darts, angry cat repeatedly attacks people for no reason, etc.
Sex:
No sex
Nudity:
No nudity
Alcohol Use:
No alcohol use
Smoking and/or Drug Use and Abuse:
No smoking or drugs; and,
Miscellaneous Immorality:
Lying, some references to magic and wonder but not in an occult sense, and boy admits he got angry at his stepfather and pushed the man’s car into a lake.

FLORA & ULYSSES is a family comedy streaming on Disney+ about a cynical 10-year-old girl who befriends a little squirrel with superpowers and learns about the importance of hope while they dodge an animal control officer who thinks the squirrel has rabies. FLORA & ULYSSES is cute, touching and funny, with positive messages about hope and family, but the movie contains references to “the Universe,” some slapstick comedy and lying.

Narrated by Flora, the 10-year-old girl, the movie opens with Flora explaining her family’s situation. Her mother, Phyllis, is a successful romance novelist. Her father, George, has written some comic books, but he can’t find a publisher and has lost all hope. So, her parents have decided to separate and are thinking about a divorce. With her father out of the house, Flora’s mother has lost her romantic muse and has developed a severe case of writer’s block. All this has turned Flora into a cynical little girl, though she still believes in superheroes, like the ones her father creates. All superheroes need to find their purpose, she says.

One day, the neighbor’s artificial intelligence vacuum sweeper goes bonkers and starts sweeping the grass outside. Flora and the neighbor try to trap the sweeper, but it keeps escaping. The sweeper then hits a tree, knocking a squirrel to the ground, where it gets hit in the head by the nut it was carrying. The vacuum cleaner sweeps up the little fellow, but Flora and the neighbor manage to cut off the sweeper’s power and retrieve the unconscious squirrel from the sweeper’s canister. The squirrel appears to have stopped breathing, so Flora gives it CPR and the squirrel miraculously revives.

Flora names the creature Ulysses, after the vacuum cleaner’s artificial intelligence program. She takes it home to her bedroom, where she hides it from her mother. Her father comes by to visit Flora, and they go to a donut diner to eat breakfast. At the restaurant, however, the waitress thinks Flora has a cat in her backpack. A cat fancier, the waitress tries to look at the cat, but she startles Ulysses, and he goes nuts. Scared and frantic, Ulysses wrecks the diner, including the large donut sign out front. He also scares the waitress by jumping on her head. To get away from the commotion inside the diner, Ulysses makes an impossible leap.

Back home, Flora thinks Ulysses somehow has gained superpowers. She soon finds out that Ulysses can understand her, though he can’t talk like a human. In fact, Ulysses can even use her mom’s old typewriter, which she bought so she could get into the mood to write her next book, a romance novel set in the 1920s.

Flora’s emotional connection with Ulysses starts giving her a new sense of hope. However, the waitress at the diner tells the local animal control officer that the squirrel that wrecked the diner has rabies. Squirrels are this guy’s nemesis. He wants to grab Ulysses and kill it so the animal control lab can test his brain to make sure it doesn’t have rabies. All he has to find Ulusses, however, is her father’s license plate.

Meanwhile, Flora befriends a neighbor boy, William, who’s visiting his aunt for the summer because he developed a case of temporary blindness involving his widowed mother and her new husband. Flora, William, Flora’s father, and, eventually, her mother try to protect Ulysses from the manic animal control officer

FLORA & ULYSSES is cute, touching and funny. As Flora, Matilda Lawler does a bang-up, energetic job. Her narration is really engaging. Alyson Hannigan and Ben Schwartz are also very good as Flora’s parents. Furthermore, the scenes with the squirrel have the cute factor that one would expect from such a family movie.

FLORA & ULYSSES has many positive messages about hope and family. Eventually, caring for Ulysses and protecting him from the mean animal control office brings Flora’s family together. Also, the hope that Ulysses brings Flora’s family restores her own hope and defeats her cynical attitude. At the end, Flora also says, “We found wonder and magic in the people we love.”

This positive content is marred by several anthropomorphic references to “the Universe” that seem to replace talk about God. People also mention the universe expanding, not just in a scientific or literal sense, but also in the sense that helping Ulysses has expanded the universe, or the social and natural environment, of Flora’s family. FLORA & ULYSSES also contains some slapstick comedy, such as Flora and Ulysses accidentally getting bonked in the head, and people being attacked by a ferocious pussycat living near the father’s apartment. MOVIEGUIDE® advises caution for younger children.