"Moving Tale of Forgiveness and Redemption" 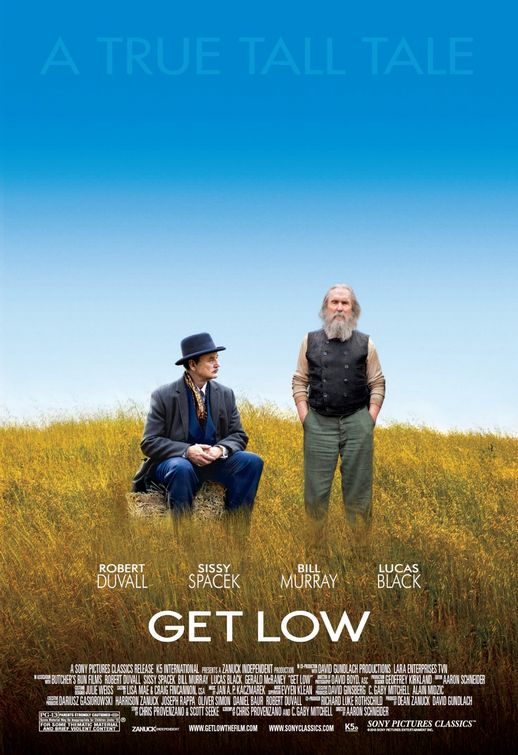 GET LOW is set in the 1930s in the mountains of Tennessee. Robert Duvall plays Felix, an old hermit who invites the entire town to his funeral…while he is still alive. The solitary curmudgeon wants to throw a live funeral so he can tell the whole town his life story and pay for forgiveness from his past sins. Felix hires the local funeral home director, the greedy and self-serving Frank Quinn, played by Bill Murray. As Felix and Frank prepare for the unusual funeral, a caring pastor helps both men learn about the free gift of forgiveness and the beauty of redemption.

GET LOW is one of the best movies for mature audiences this year. The story develops at a perfect pace. The direction is simple and direct. Robert Duvall’s scene-stealing performance as Felix is magnificent. He leads a very talented cast. GET LOW has plenty of foul language, most of it light. It also has brief violence and some mature elements, such as a confession of past adultery. However, the movie is filled with strong moral, redemptive and Christian elements including forgiveness, prayer, a positive pastor, and a Christian funeral.

(CC, BB, Ab, LLL, V, A, D, M) Strong Christian, moral, redemptive worldview with a lot of Christian elements of forgiveness and redemption, Christian prayer depicted, Christian funeral ceremony, and pastor character depicted in very positive light, marred by lead character says that he does not need to ask Jesus for forgiveness because he did not do anything to him; 29 obscenities and seven profanities; home is burning, man on fire jumps from window, young boy throws a rock through hermit’s window, man hits another man in stomach, shoots a shotgun to scare of trespassers, sick man collapses; man tells story of fight with another man that ends in a woman dying in a house fire; no sex scenes but elderly man confesses having an adulterous affair years ago which resulted in tragedy; no nudity; alcohol consumption in a few scenes; cigarette smoking depicted; and, lying, gossip, vandalism, theft, but the immoral content is not glorified.

GET LOW is a moving tale of forgiveness and redemption. Set in the 1930s in the mountains of Tennessee, the movie stars Robert Duvall as Felix. Felix is an old hermit who wants to tell the story of his life to the local townspeople, so he invites everyone to his funeral…while he’s still alive.

For decades, the townspeople have wondered about Felix, the crazy, old hermit on the edge of town. Legend surrounds the solitary curmudgeon who only comes to town every once in a while for supplies. Then one day, Felix comes into town, saying it is time for him to “get low” and prepare for his funeral.

With a big roll of cash in his hand, Felix meets with a local pastor, saying he wants to buy a funeral and buy forgiveness. The pastor tells Felix that forgiveness is free and that he cannot buy it. All Felix has to do is ask for forgiveness, the pastor says.

Felix storms out of the church and is met by Frank Quinn, the local funeral home director played by Bill Murray. Frank is more than happy to grant Felix his wish for a funeral, especially if Frank can get his hands on Felix’s sizeable money. Felix agrees to work with Frank, but Felix has an odd request: he wants all the townspeople to come to a live funeral while he is still alive.

As Frank helps Felix prepare for his unusual last request for a live funeral, the two men each learn about the free gift of forgiveness and the beauty of redemption.

GET LOW is one of the best movies for mature audiences this year. The story develops at a perfect pace. The direction is simple and direct. The acting is superb. Robert Duvall’s scene-stealing performance as Felix is magnificent. He leads a very talented cast, which boasts great performances from Bill Murray, Sissy Spacek, Bill Cobbs, and relative newcomer Lucas Black.

GET LOW has foul language (29 mostly light obscenities and seven profanities), some very light violence, and some mature thematic elements (such as Felix confessing to adultery in his past). However, it is filled with strong moral, redemptive and Christian elements including forgiveness, positive mention of prayer, pastors, and a Christian funeral. The only short-failing of the movie’s redemptive content is that, even though Felix eventually asks for forgiveness, he never deliberately calls on Jesus Christ for salvation, though it is implied. However, discerning audiences, especially older teens and adults, will certainly enjoy this fantastic, dramatic tale based on a true story.