I BELIEVE IN SANTA

"A Truly Santa-Centric Approach to Christmas" 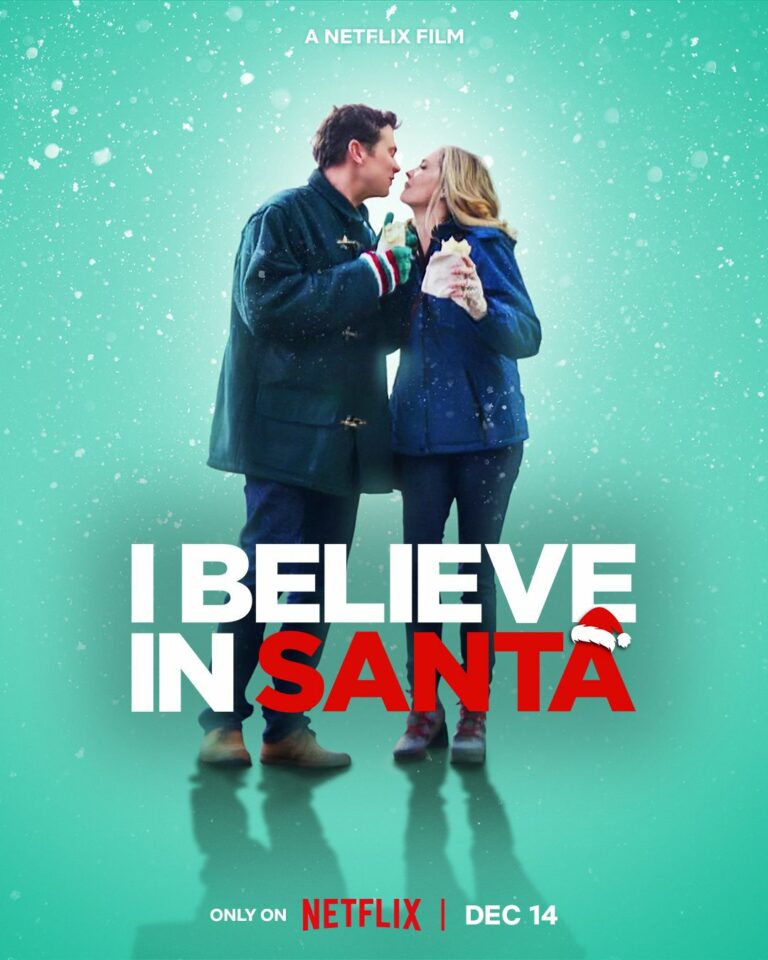 I BELIEVE IN SANTA is a romantic comedy on Netflix about a single mom and magazine writer named Lisa who hates Christmas. Lisa falls for a lawyer named Tom, who’s obsessed with Santa. As Lisa’s young daughter becomes attached to Tom, Lisa becomes more concerned that Tom truly believes Santa is real. Tom’s also set up 25 straight nights of Christmas-related activities. This schedule finally drives Lisa so crazy that she breaks up with him. Can Tom win her back?

I BELIEVE IN SANTA has lots of laidback charm and sweetness. It also stresses love and commitment in a wholesome manner. However, it has one big problem. Tom believes Santa’s the most important figure of Christmas, because religion, like belief in Jesus, divides people, but Santa doesn’t. Eventually, both Lisa and Tom’s Muslim friend endorse the general principle of having a faith “in things bigger than ourselves,” whatever it may be. I BELIEVE IN SANTA also has eight light profanities, a scene where an engaged couple leave a living room to go upstairs into the woman’s bedroom, and a quick homosexual reference.

(Pa, BB, PP, Ro, FRFR, Ab, Ho, L, V, S, A)
Dominant Worldview and Other Worldview Content/Elements:
Light mixed pagan worldview with some moral elements that say being with the people you love is part of the magic of Christmas, that promote commitment as part of the love in romantic relationships and that promote freedom and Fourth of July celebrations, but movie also has some false religion, such as lead male character places faith in Santa in celebrating Christmas and the “magic” of Christmas because religion, including religious celebrations of Jesus during Christmas, can divide people, his Muslim friend briefly discusses faith as a general principle that can unify all people because all people embrace some kind of faith in something, the lead female character says her boyfriend has taught her the importance of faith “in things bigger than ourselves,” and a Muslim friend says he didn’t know why he was bullied in past because “we’re all the same,” plus there’s a scene where lead male character says (contrary to what the Bible teaches) that you can’t prove something that’s unknowable like the existence of God or the existence of Santa Claus, and lead male character’s friend says he’ll looking for “cute guys” at a community-wide Fourth of July event, but his homosexuality never comes up again in the movie
Foul Language:
No obscenities, but there are eight light profanities such as OG or OMG, and two light innuendos
Violence:
A short snowball fight scene occurs and three cardboard sleds crash during a sled race down a mountain slope in Denver
Sex:
No sex scenes, but engaged couple leaves living room to go to woman’s bedroom, unmarried romantic couple kisses several times and there’s one brief reference to homosexuality
Nudity:
No nudity
Alcohol Use:
People drink wine two or more times
Smoking and/or Drug Use and Abuse:
No smoking or drugs; and,
Miscellaneous Immorality:
Nothing else objectionable.

I BELIEVE IN SANTA is a romantic comedy on Netflix about a single mom and magazine writer who hates Christmas but falls for a lawyer who’s obsessed with Santa and Christmas, and how their beliefs clash, causing rifts in their romance. I BELIEVE IN SANTA has lots of laidback charm and sweetness overall, but the lawyer isn’t religious and says Santa’s the important figure of Christmas, not Jesus, and the movie includes a few other problems, including eight light profanities.

Lisa (Christina Moore) is a single mom and magazine writer who hates Christmas but always is assigned to write essays on holidays. Lisa meets a lawyer named Tom (John Ducey) when he helps her daughter, Ella, when Ella gets lost at a Fourth of July event.

She soon learns that Tom is in love with the secular side of Christmas and those traditions, especially Santa, and that he’s way over the top in his enthusiasm and really needs to grow up. She’s stunned by this revelation on their first date but seeing him as a source of material for her article, she continues dating him.

Lisa soon finds herself having fun with Christmas traditions again, as John’s best friend, Assan (Sachin Bhatt), and her best friend, Sharon (Lateefah Holder), watch bemused. Assan warns Tom that perhaps he shouldn’t inform Lisa of his biggest secret, that he actually believes Santa is real even though he’s in his 30s.

As Lisa’s daughter Ella (Violet McGrew) becomes really attached to Tom, Lisa is concerned that Tom keeps telling her not to lose her faith in Santa. Tom’s also set up 25 straight nights of Santa and Christmas-related activities. The schedule finally drives Lisa crazy, and she breaks up with him.

Can Tom win Lisa back? Will Lisa ever come to love Christmas?

I BELIEVE IN SANTA is a low-key charmer. It’s clearly low-budget and at times a little slow. However, as the movie continues, viewers will come to love the characters due to fun performances by the two leads and all the supporting cast. Director Alex Ranaverdo is good at keeping the movie going, even though it relies on dialogue more than activity and occasionally drops in montages that are annoying in their sticky-sweetness.

The movie more than makes up for those small weaknesses with a spectacular sleigh race where Tom creates a realistic, Santa-worthy sleigh out of cardboard boxes for Ella. The scene is tremendous fun.

The one problematic area is that Tom on two or three occasions delivers speeches where he talks about faith being vital, but it’s faith in Santa, not Jesus, that he espouses. He says adults say Santa’s not real because there’s no proof for his existence but some of those same adults embrace organized religion even though there’s no proof God exists.

However, Lisa says Tom taught her of the importance of faith “in things bigger than ourselves” without specifically mentioning God or Jesus. Also, in one scene, Tom’s Muslim friend, Assan, makes the false claim that Islam is the same as Christianity when he speaks of how he was bullied as a child “even though we’re all the same.” In that scene, he also says faith is a general principle that can unite all people because all people have faith in something of one kind or another.

Apart from the issues of Christmas, Santa Claus and faith, I BELIEVE IN SANTA contains several other problems that are really unnecessary. It has eight light profanities, a scene where an engaged couple leave a living room to go upstairs into the woman’s bedroom, and a quick line of dialogue where the male lead’s friend says he can find some “cute guys” at a community-wide event. The vast majority of the scenes in I BELIEVE IN SANTA, however, are rather wholesome and family friendly.