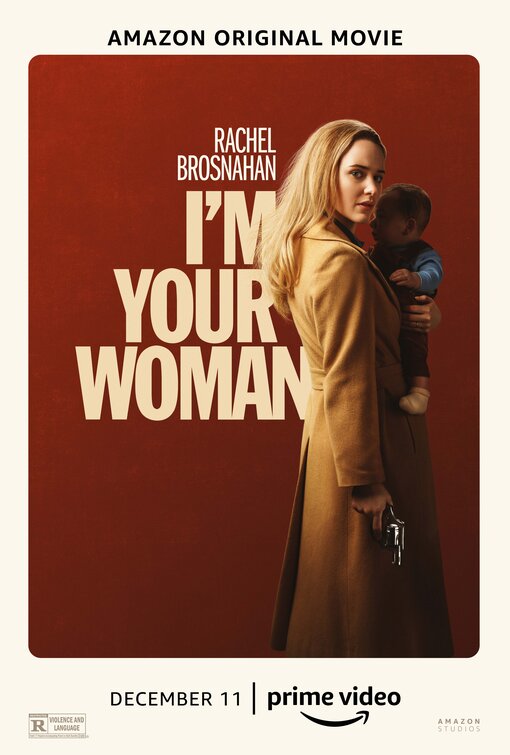 I’M YOUR WOMAN is a crime drama set in the 1970s. Jean and her husband, Eddie, can’t have children, but one day Eddie comes home with a baby boy. Jean, who’s not ready to be a mother, jumps into the deep end of taking care of the child. However, her situation is complicated when her husband goes missing, and she’s told to flee for her life. Jean and the baby embark on a dangerous game of cat and mouse trying to keep away from the dangerous criminals looking for her missing husband.

I’M YOUR WOMAN is an intense movie with lots of jeopardy and some genuinely thrilling sequences. It has some subtle pro-life themes and celebrates motherhood’s hardships and joys, and the importance of sacrifice. I’M YOUR WOMAN is a riveting movie about the lengths a woman will go to protect a child, with a stunning, unique 1970s setting. Where the movie falls short is in some poor pacing, one-note performances and unnecessary foul language. MOVIEGUIDE® advises extreme caution for the foul language and graphic gun violence in I’M YOUR WOMAN.

(C, B, LL, VVV, D, M):
Dominant Worldview and Other Worldview Content/Elements:
Light redemptive, moral worldview where a woman learns how to sacrifice for and care for a child, with a subtle pro-life message where the woman has every reason to get forsake the child but keeps him and protects him
Foul Language:
Eight “f” words, about 10 milder obscenities and one exclamatory JC profanity
Violence:
Heavy crime and gun related violence, two men are shot and killed in front of a woman holding her baby, a woman who is tied up is also shot and killed in front of the mother and her baby, several gunman walk into a bar/club and start shooting people (only a few bodies can be seen on the ground, but the overall scene is very intense), a head on collision results in severe injuries with blood shown, a man is shot in the head, three dead bodies are seen on the ground in another scene
Sex:
No sex scenes or sexual immorality
Nudity:
No nudity Alcohol Use/Abuse: Some wine drinking
Smoking and/or Drug Use and Abuse:
Several characters smoke cigarettes; however, it’s said that cigarettes are bad for your health, one character puts a cigarette in his mouth without lighting it to help him stop smoking; and,
Miscellaneous Immorality:
Most of the action sequences involve a baby, which adds to the intensity.

I’M YOUR WOMAN is a crime drama set in the 1970s that follows a mother forced to go on a dangerous journey of cat and mouse while taking care of her baby.

The movie opens with a woman, Jean, in the backyard of a very expensive looking house. She narrates how she and her husband cannot have children and that she spends most of her time alone at the house. She tries to cut off price tags from her blouse when her husband Eddie comes home with a surprise. Eddie walks in with a newborn boy and says that he is theirs to raise and look after. Although Jean once wanted a child of her own, her dreams of motherhood had all but vanished. She reluctantly accepts her husband’s gift.

The movie cuts to Jean and the baby, whom she names Harry, and a loud knocking at their door. One of Eddie’s friends enters the house and frantically tells Jean to take the baby and run. The friend mentions something about Eddie’s line of work finally catching up to him, but he doesn’t elaborate. He tells her to meet Cal, and that he will protect her and the child.

Cal, an African American man who apparently worked with Eddie in the past, is a man of few words. He helps Jean and Harry settle into a new house but tells them not to talk to anyone, keep the door locked at all times, and only use the phone in an emergency.

Jean becomes worn down not only by worrying about her husband, but trying to learn to become a mother. A friendly neighbor offers to help her out, and Jean, despite Cal’s warnings, invites her into the house for dinner.

Harry starts crying, so Jean takes him on a walk. When she arrives home, there’s someone else in the house with them. She calls the emergency line and rushes over to her neighbor’s house to find her tied up and at gunpoint. The criminals demand to know where Eddie is, but at the last moment, Cal shoots them, and they go on the run again.

Jean feels incapable in many ways but is forced into motherhood in extreme conditions. Jean must face the truth about Eddie and come to grips with just how far she’s willing to go to protect Harry.

I’M YOUR WOMAN is an intense movie with lots of jeopardy and a few genuinely thrilling sequences that will have viewers on the edge of their seats. It also has some subtle pro-life themes, celebrates motherhood’s hardships and joys, and the importance of sacrifice. I’M YOUR WOMAN is a riveting movie about the lengths a woman will go to protect a child, along a similar vein to A QUIET PLACE, with a stunning, unique 1970s setting. Where this movie falls short is in some poor pacing, some one-note performances, and unnecessary foul language. MOVIEGUIDE® advises extreme caution for the foul language and graphic gun violence in I’M YOUR WOMAN.