"The Life-Saver of Nanjing" 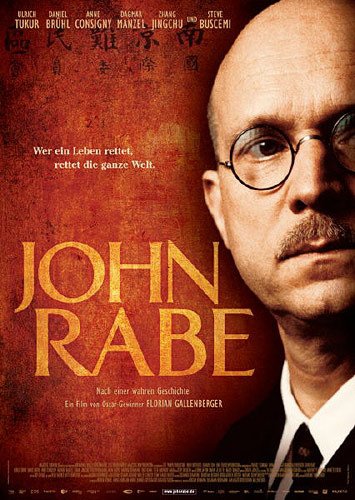 JOHN RABE is a powerful German movie about the German merchant who helped save 200,000 Chinese lives in Nanjing when the Japanese Army invaded China to help begin World War II. John could flee when the Japanese invade, but he feels responsible for his personnel and the people in the town. John is elected chairman of an international committee of foreigners to establish an international safety zone in Nanjing. His beloved wife seems to have been killed during the Japanese Air Force’s bombing of the last passenger liner that left Nanjing. John watches this bombing helplessly. Though emotionally devastated, John steadies himself and remains in Nanjing to continue helping the Chinese people.

JOHN RABE is a remarkable, impressive, and redemptive movie about John Rabe and the other members of the international committee. Ulrich Tukur is brilliant in the title role of this powerful true story from a very gloomy chapter in history. Besides brief nudity, the brutal violence of the Japanese Army is sometimes difficult to watch; so extreme or strong caution is advised. That said, JOHN RABE is a wonderful testament to human compassion in the face of National Socialism’s repressive, totalitarian cruelty.

Not many people know about the German John Rabe, but he is responsible for the rescue of more than 200,000 Chinese people in Nanjing, the former capital city of China. The German movie JOHN RABE tells his remarkable story.

The story opens in 1937. For many years, the German merchant John Rabe (played by the gifted Ulrich Tukur) has lived in Nanjing, China’s capital city. He is a managing director of the Siemens branch office and is proud of his work. Now, he must return to the Siemens headquarters in Berlin.

John reluctantly prepares his departure, but then Nanjing is attacked by the Japanese Army, which has entered China. John could flee, but he feels responsible for the personnel and people in the town.

John is elected chairman of an international committee of foreigners to establish an international safety zone in Nanjing. His wife seems to have been killed during the Japanese Air Force’s bombing of the last passenger liner, which left Nanjing. John must watch this bombing helplessly. Though he is emotionally devastated, he pulls himself up and remains in Nanjing to help the Chinese people.

Besides John, the chief physician (Steve Buscemi) of the local hospital, the leader (Anne Consigny) of a girl college, a German Jewish diplomat (Daniel Brühl), a British Anglican priest, and an American professor belong to the international committee. Under John’s management, the committee builds up the safety zone in the town and tries to maintain the care of the people. This is no slight venture, particularly since thousands are pressing into the zone because of the Japanese Army’s brutal activities inside and outside Nanjing.

The committee sees this brutality daily. Again and again, they are confronted with having to protect and save the people from death. The situation gets worse and worse as the Japanese plan to storm the safety zone on a pretext.

JOHN RABE is a remarkable, impressive, and redemptive movie about John Rabe and the other members of the international committee, who showed great courage in a very difficult situation and saved many lives. Some scenes in the movie are really hard to watch because of the Japanese Army’s brutality. But, they are necessary to show what happened in Nanjing. Thanks to the safety zone, more than 200,000 Chinese people survived the massacre, though the Japanese Army killed about 300,000 Chinese people in Nanjing.

An emotional part of the movie is John Rabe’s relationship with his wife Dora (played by Dagmar Manzel). Has his wife survived the bombing? John receives the answer by the end of the movie.

John Rabe was a Nazi, but has no idea what was happening in Germany, because he lived a long time in China. He thought Hitler is a brave man who would do something against this massacre in Nanjing, but of course Hitler didn’t. Rabe, however, used his identity as a German and a Nazi to help the Chinese people in Nanjing, because Germany was allied with Japan at this time. There is a strange but remarkable scene in the movie when some Chinese people run under a big Nazi flag, which Rabe uses as a sign for the Japanese pilots not to bomb the place, thus saving the lives of these people during this terrible moment.

After his return to Berlin, Rabe informs people what happened in China. But then, the Gestapo arrests him as a collaborator of the Chinese and forbids him to report on his experiences in China.

Rabe’s diaries, where he wrote down what happened, were confiscated, but appeared again 60 years later. In 1996, they were published as a book and were helpful in making this movie. The New York Times called John Rabe “China’s Oskar Schindler.” Sadly, Rabe died an impoverished man in 1950 in Berlin. Only some people took part in his funeral.

German director Florian Gallenberger has managed to set up a monument to John Rabe with this 134-minute film. He superbly tells a powerful true story from a very gloomy chapter in history. The movie, the main actor Ulrich Tukur, the stage setting, and the costumes all won German movie awards in 2009.