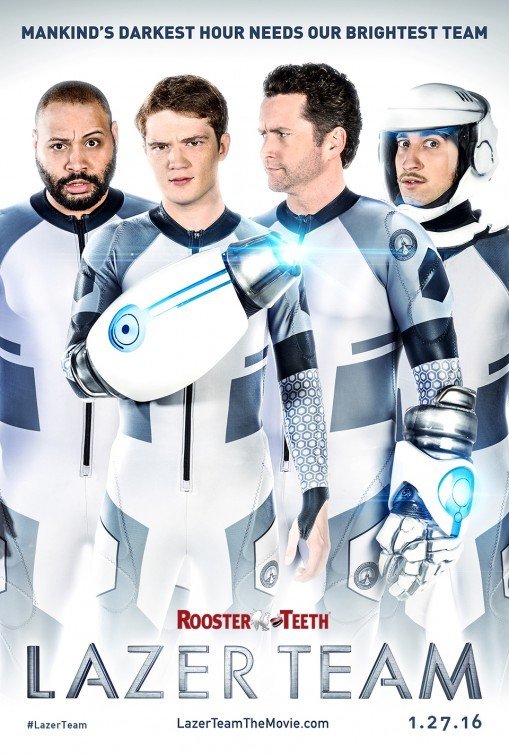 LAZER TEAM is an over-the-top science fiction comedy, with too many cheesy one liners, about a group of four unlikely heroes forced to defend Planet Earth against a group of evil aliens. Four misfits in Texas come across an alien crash site. They find a powerful battle suit inside the spaceship and try on parts of the suit. Though it’s not meant for them, the battle suit attaches itself to them. Now, mankind must depend on these four misfit underdogs to save Planet Earth from the alien invasion.

LAZER TEAM is a personal project made for $2.5 million through crowd funding, which is impressive. However, the attempt to bring dumb humor to life (ala DUMB AND DUMBER) is just not there. The jokes are too often painfully bad, and the characters’ redeeming qualities are only lightly touched upon, giving the audience no strong reason to root for them. LAZER TEAM has some moral, redemptive elements, but its worldview is otherwise mixed. Consequently, there’s some crude behavior and lots of obscenities and profanities. So, MOVIEGUIDE® advises extreme caution for LAZER TEAM.

(PaPa, BB, C, LLL, VV, S, AA, D, MM) Strong mixed pagan worldview with strong moral, redemptive elements including unlikely heroes defeating evil forces, including self-sacrifice, forgiveness, compassion, and justice, with pagan worldview glorifying Greek mythological gods, and the future of Earth lies in the hands of superhero humans not God or Jesus; at least 44 obscenities and 13 profanities, plus one cut off “f” word, and man gets sick; strong action violence but no bloodshed includes lots of lasers, explosions and flames, lots of fighting, special effects of humans without legs, arms or a head; some crude references but no depicted sex scenes include crude gestures, comical references to self abuse, teenage girl rips off teenage boy’s clothes, teenage boy talks about engaging in fornication with a girl; no nudity; one scene of underage teenagers partying and drinking and man drinks beer for fun; light smoking, some teenagers smoke at party, and adult smokes a cigarette, but no drugs or illegal substances; and, moderate miscellaneous immorality including blackmail, stealing, lying, and bad role models

LAZER TEAM is an action comedy about four misfits who stumble upon an alien crash site, where they are forced to wear parts of a powerful battle suit to help save mankind from some evil extraterrestrials. LAZER TEAM uses over the top slapstick comedy and lots of cheesy CGI effects and tries too hard to be funny, while the use of lewd behavior and numerous obscenities and profanities warrant extreme caution.

In 1977, the government decodes a secret transmission from a race of aliens warning that deadly group of bad aliens known as the “Worg” are coming to destroy Earth in the future. To help save Earth, the aliens send a powerful battle suit for the strongest human on Earth to wear. The government chooses Adam, training him from the day he was born, to be the Champion of Earth. They name the secret mission Project Perseus, after the Greek God who triumphed after receiving gifts from the gods.

Flash forward to 38 years later, in a small-town in Texas. The spacesuit never reaches the government because two goofballs in Texas, Woody (Gavin Free) and Herman (Colton Dunn), shoot the UFO down with a firework. Officer Hagan (Burnie Burns) arrives with Zach (Michael Jones) in his backseat, a troublesome teenager he just arrested for causing ruckus at a teenage party, to put a stop to the illegal use of fireworks being shot.

The officer, teenager and the two country goofballs approach the UFO where they find a battle suit sitting inside. The four mean each try on a piece of the suit, which attaches to their body instantly, giving them all superhero qualities. A recording from the good aliens warns them of the impending alien attack coming to Earth.

The military locates the crash site and brings the four men back to base. Angry that their precious suit has been jeopardized by a burnt-out officer, an overweight drunk, a dumb video gamer, and a troublesome teenager, they are forced to change their plan of action now the suit can’t be worn by their own Champion of Earth. The army places Adam (the chosen Champion) in charge to train the men, but everything goes horribly wrong. The army decides to perform surgery on the men, in hopes of disconnecting the suit from their bodies. However, the four misfits escape. Can they put aside their differences long enough to defeat the Worg champion?

LAZER TEAM starts out strong with what looks like a humorous, action movie fit for families. However, as the movie continues, this proves not to be true. The movie contains too much slapstick comedy that tries too hard and a handful of offensive scenes with crude references. LAZER TEAM also has a mixed worldview with a lot of foul language. Therefore, MOVIEGUIDE® advises extreme caution.