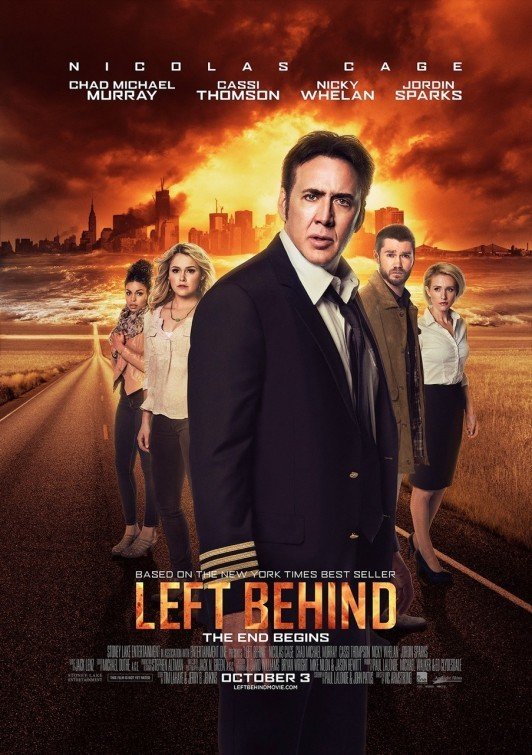 In LEFT BEHIND, Irene tries to convince her husband Ray and her daughter Chloe that they need to accept Jesus Christ. Ray and Chloe find Irene pushy. At an airport, while waiting to see her father, Chloe ridicules a Christian woman. This impresses a reporter named Buck, who shares her distain for Christians. They become instant friends. Ray and Buck board the flight to London. Chloe takes her young brother to a Mall. He suddenly disappears right from her arms. A number of other people disappear that same instant, and the mall it thrown into confusion. On the flight to London, the copilot and a number of passengers disappear leaving piles of clothes. Confusion reigns on the plane as well. Buck helps Ray calm the passengers and attempt a hazardous return to New York.

Not all Christians expect the pre-tribulation Rapture presented in the movie, but most do expect the Second Coming of Jesus. To its credit the movie profoundly presents the question “are you ready?” The script and execution could have been better, but the content is not objectionable, and the message profound.

(CCC, BBB, V, S, D, M) Very strong Christian, biblical worldview for those who look for a pre-tribulation rapture of the church with references and quotes of Scripture, prayer and a clear message that Jesus is the only way; no foul language; some looting, a looter shot by a store owner, purse snatched, crashing and burning of planes and vehicles left unattended, a woman with a bloodied arm is seen unconscious in a car after it crashes, a young woman almost jumps off a bridge to kill herself; no sex, but a married man sets up an adulterous encounter that doesn’t come to pass; no nudity; no alcohol, no smoking, one person is clearly a heroin addict; assorted dishonesty and some ridicule of belief in God.

The best selling rapture novel LEFT BEHIND has been remade with Nicolas Cage as airline pilot Ray Steele and Chad Michael Murray as international journalist Buck Williams. Like the original LEFT BEHIND starring Kirk Cameron, the movie emotionally presents what occurs on the day of a pretribulation rapture.

Eschatology (end times expectations) varies widely among Christians. Those who believe the church will make a heavenly disappearance prior to a period of great tribulation could very well enjoy this movie. Even those with differing eschatology can watch and ponder what the story might look like with their beliefs presented. What Christians usually agree is that Jesus is expected to return, and there’s a need to be ready for that event .

LEFT BEHIND focuses on the family of Ray, an airline pilot whose wife Irene accepted Jesus a year before. Irene has tried to warn her husband and her daughter Chloe about what looks like the nearing of the second coming of Jesus Christ. Ray and Chloe find Irene pushy and annoying. Irene pushes because she doesn’t want anyone in her family left behind.

Chloe comes home from college for a surprise birthday party for her father. Ray gets called to pilot a flight to London, and so only sees Chloe at the airport before taking off. While waiting to see her father, Chloe ridicules a Christian woman, impressing the well-known international reporter Buck who shares he distain for Christians. They become instant friends. Ray stops for his brief visit with Chloe and, without her father realizing, Chloe discovers he is lining up an adulterous London event with his flight attendant Hattie. Buck boards the flight to London, and Chloe drives her father’s car home.

After an argument with her mother, Chloe leaves, taking her young brother Raymie to the Mall. At the mall, the rapture occurs with Raymie disappearing right from the arms of Chloe. A number of other people disappear that same instant, and the mall it thrown into confusion. Some people take the opportunity to engage in looting. Chloe doesn’t understand what happened and begins searching for her brother.

On the flight to London, the copilot, one flight attendant and a number of passengers disappear leaving piles of clothes. Confusion reigns on the plane as well. Buck proves to be a great help to Ray who has to calm the passengers and attempt a hazardous return to New York.

The strength of the movie is that it profoundly poses the simple question, “Are you ready?” which is worth considering regardless of your eschatology. The weakness of the movie is that it takes so much time for the survivors to comprehend what happened. While movies need time to build emotion, it is a bit hard to believe someone didn’t instantly blurt out “the Rapture! Oh no, I’ve missed the Rapture!” It might actually have been stronger if characters left on the plane discussed, “Those Christians were right! What happens now?” Instead they discuss, “Are they still here, but just invisible?” and “Who abducted my daughter?”

Like the wonderful scene in RATATOUILLE featuring the confession of the food critic Anton Ego, it is easier to criticize something than to make something. The filmmakers present a story that boldly poses the most important question you’ll ever answer, “Are you ready?” There will be people who see this movie whose answer will change from “no” to “yes.” If you stand on a street corner shouting, “The end is near,” people might think you’re crazy. If you make LEFT BEHIND, some people will engage with the story and wonder, “What if that did happen?” That said, some of the Christian characters seemed more annoying and judgmental than sincere, and that’s not how the Gospel should be preached.

Some of the dialogue was on the nose and had very little tension. Some of the minor characters could have been stronger, but the acting by the main cast was competent enough to keep the movie interesting. Additionally, the music was all over the place stylistically and distracted from the movie.

While the movie poses some good questions and has some positive representations of the Gospel, salvation is not about buying a cross necklace so you can disappear on Rapture day. It’s about loving God and becoming more like Jesus. It’s about receiving God’s grace and experiencing a transformed life. As you experience this, you’ll be ready for any earthly ending that might await you. You’ll also be ready for the very best life on earth has to offer: peace, joy and the love of God.

If LEFT BEHIND has you thinking about how to be more like Jesus, rush out and see it on opening day. Movieguide® gives it three stars. While clearly posing the “are you ready” question it has virtually no objectionable content other than some action violence.