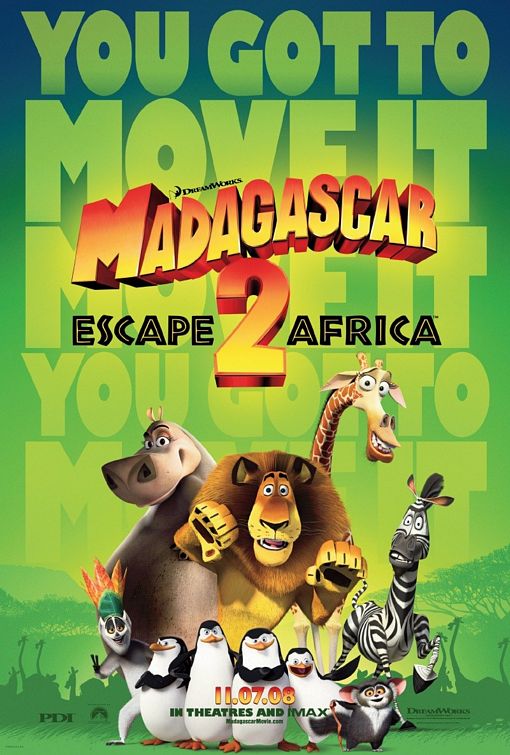 MADAGASCAR: ESCAPE 2 AFRICA opens with Alex, Marty, Gloria, Melman, and the penguins still stuck in Madagascar. With military precision, the penguins have restored an old plane and named it Air Penguin. The animals hope to fly the plane to New York, but one mishap after another leaves them stranded in the wildest place of all, Africa. Here, the zoo-raised crew finds species of their own kind for the first time. This becomes a learning experience for everyone. The story comes to a head when the local watering hole dries up.

MADAGASCAR: ESCAPE 2 AFRICA is one of the most hilarious, heartwarming animated movies of the year. The cast, directors and writers do an excellent job of picking up where the first movie left off. They have crafted a good script with well-rounded characters who choose to act according to moral, virtuous principles. Among the Christian values extolled in the movie are love, friendship, family, self-sacrifice, forgiveness, and marriage. MOVIEGUIDE® recommends caution for older children, however, due to some scatological humor and some adult humor. There are also some light, humorous pagan elements regarding a witch doctor and a volcano sacrifice.

(BB, C, Pa, O, Ho, L, V, AA, M) Strong moral worldview with Christian principles extolling self-sacrifice, honesty, friendship, love, forgiveness, marriage, loyalty, and courage, but marred by some light pagan, occult elements when one of the main characters becomes the witch doctor for the other animals and the animals choose to make a sacrifice in a volcano to the water gods, but this is represented in a humorous and ridiculous way, plus light homosexual elements such as animals make comments implying that another animal is a homosexual but these implications are refuted by that animal’s character and his love for a female animal, a male monkey kisses a male penguin, male animal pretends another male animal is a female in order to show him how to profess his love; five light obscenities such as “butt,” “freaks,” “suck ups” and “fuzz buckets”; mild pratfalls, scatological and action violence such as two animals pick their noses and then feed each other, two animals fight each other to establish dominance, animal gets his head thrown into a rock, animal gets shot in the ear with a gun and falls off of a truck, animal gets into a fist fight with an old woman, animals try to run over an old woman with a jeep, animals are attacked by hungry humans who want to eat them, humans try to roast animal over a fire, animals get squashed and kicked, animal is attacked by hungry shark, animals take pratfalls, animals slam into a wooden dam, animals spit, animal threatens other animals with a knife; light crude sexual allusions, some with homosexual elements, such as animal cross-dresses and says, “I am a woman, which of you is attracted to me?”, animal mentions wanting to enter a “breeding program,” animal has a fetish in which he is attracted to a Hawaiian dancing bobble doll, human gives CPR to animal calling it “the kiss of life,” animal describes another animal as being very “big,” animal asks for his nuts to be brought to him on a silver platter on a plane ride; no nudity; animal staggers around after a party before passing out; no smoking or drug use; and, selfishness, lying and deceit by the main bad character, stealing, and blackmail, but these things are resolved in the end.

MADAGASCAR: ESCAPE 2 AFRICA, a sequel to the 2005 movie MADAGASCAR, is one of the most hilarious, heartwarming animated movies of the year thus far. The writers, directors, and cast have succeeded in making audiences once again applaud the characters of Alex, Marty, Gloria, and Melman as they continue to grow in their adventures together and learn the value of love, friendship, family, self-sacrifice, and forgiveness. The movie contains, however, some allusions to homosexuality and paganism that require caution for older children.

The story opens with a flashback from Alex’s past when he was a baby lion playing with his father, Zuba, on the plains of Africa. Through an unfortunate turn of events, Baby Alex is kidnapped by a group of poachers. Zuba tries to save him, but his attempts are unsuccessful. Alex eventually ends up at the New York zoo where he first meets his friends Marty, Gloria, and Melman.

Fast forward to the present. Alex, Marty, Gloria, Melman, and the penguins are still stuck in Madagascar, but have hatched a plan of escape so crazy it just might work. With military precision, the penguins have restored an old crashed plane and named it Air Penguin. In high hopes of making it home to New York, the animals board the plane, only to encounter one mishap after another that ultimately leaves them stranded in the wildest place of all, Africa. Here, the zoo-raised crew finds species of their own kind for the first time and it is a learning experience for them all.

Alex is reunited with his parents where he learns what it means to be part of a family, especially when they are faced with opposition by Makunga, a deceitful, scheming lion who envies Zuba’s position of leadership. Marty, who has always dreamed of roaming the wild with his own kind, comes to understand that differences in each animal enrich the group as a whole. Melman, the hypochondriac giraffe, learns to become less concerned with his health and to face the truth of his feelings for Gloria, who has just started dating a conceited, selfish hippo by the name of Moto Moto (which means Hot Hot).

As a whole, the movie has many laugh-out-loud moments mixed with redemptive elements such as Marty’s forgiveness of Alex after a heated argument, Melman’s willingness to sacrifice himself for the good of the everyone else, the reunion of Alex and his father as they work out their differences with each other, and the love between Melman and Gloria, which ends in a sweet wedding ceremony at the end of the movie. All of these elements and more make this movie a worthwhile 94 minutes of entertainment. Not only does this movie live up to the expectations set by the first movie, but it also makes the characters become more well-rounded as they grow through their new experiences. Ben Stiller, Chris Rock, Jada Pinkett Smith, and David Schwimmer do a superb job of playing the voices of the main characters. The directors and writers have truly created a movie with excellent production quality, a solid script, and well-rounded characters.

However, MOVIEGUIDE® recommends caution for older children due to some scatological humor and pratfalls, action violence, and light crude references that for the most part only adults would understand. The movie also contains some humor with pagan and occult elements. For instance, Melman becomes the witch doctor for the animals, and there is an attempt at a volcano sacrifice to the water gods when the waterhole dries up. These elements are treated in a comic fashion but they merit caution and discernment.

MADAGASCAR: ESCAPE 2 AFRICA is reminiscent of the SHREK movies (also created by the DreamWorks team) when it comes to its humor. For more information concerning the movie’s objectionable elements, please read the CONTENT section provided.