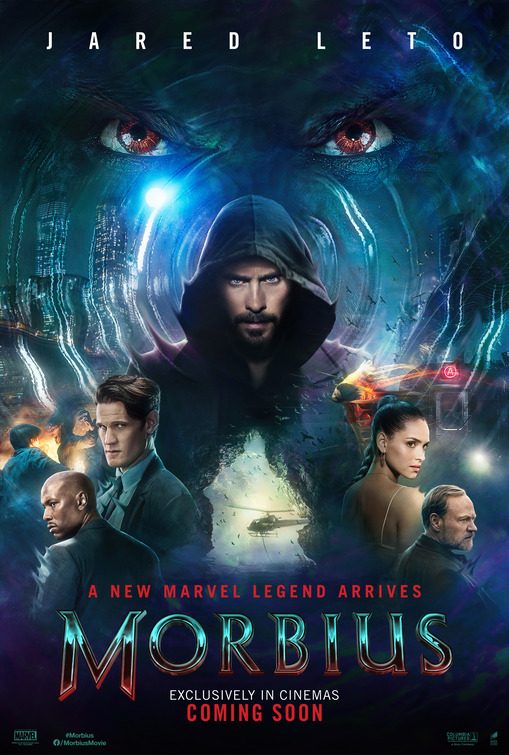 MORBIUS is a science fiction thriller with scary horror scenes about super-strong vampires. Dr. Michael Morbius is a world-renowned scientist who’s created a valuable artificial blood plasma. However, he suffers from a crippling, terminal blood disease. Michael finds a possible cure. However, it’s developed from vampire bats, and the serum turns him into a monster, with a craving for human blood. Michael avoids drinking real blood by consuming his artificial blood. However, its effectiveness is wearing off. Meanwhile, his best friend has stolen and injected the serum, with no intention of not killing people for their blood.

MORBIUS has a fair number of scary, exciting moments. However, the story is too simple and comes down to a battle between Michael and his friend. MORBIUS has a light humanist worldview with some moral elements. There’s no lewd or explicit content. Also, the foul language is kept to a minimum. The violence in MORBIUS is rather intense, but not gory or super graphic. However, MOVIEGUIDE® advises extreme caution because of the movie’s

(H, Ev, B, PP, LL, VV, N, M)
Dominant Worldview and Other Worldview Content/Elements:
Light humanist worldview with one or two references to evolution, some moral elements about stopping the villain’s murder spree and finding medical cures, plus police n movie are admirable public servants
Foul Language:
13 obscenities (mostly “s” and “h” words and one “f” word), people drink blood, and one person tastes blood
Violence:
Strong, intense, sometimes scary violence such as serum turns scientist into a bloodthirsty super-vampire who attacks and kills some men with guns trying to shoot him dead but the scientist finds a moral way to stop his bloodlust temporarily, scientist’s friend takes the serum against the scientist’s advice and starts a killing spree, the two friends have multiple intense battles with one another, during one such battle the scientist’s friend slaughters several police officers in cold blood, villain kills a doctor trying to help him, villain fatally wounds another character, bullies starts kicking a young crippled boy, but a man stops them
Sex:
No sex scenes or sexual immorality, but it’s implied the murderous villain vampire is licentious but it’s rather vague with no details given, and there are about two kisses between the hero and his romantic interest
Nudity:
Upper male nudity in some scenes
Alcohol Use:
No alcohol use
Smoking and/or Drug Use and Abuse:
No smoking or drugs; and,
Miscellaneous Immorality:
Woman lies to police to protect her close friend, and a man steals a serum that turns him into a bloodthirsty super-vampire, but, unlike his scientist friend, the man has every intention of hedonistically enjoying his new bloodlust vampire lifestyle.

MORBIUS is a Marvel movie about a talented doctor, Michael Morbius, with a terminal blood disease, who becomes a super-strong vampire when he develops a supposed cure that’s developed from vampire bats. MORBIUS has a fair number of scary, exciting moments, with some moral elements about trying to stop a second vampire who enjoys killing, but the story is too simple and contains vampire themes, intense violence, scary moments, and some foul language.

Cut to 25 years ago. A young boy, Lucien, arrives at a special clinic in Greece for victims of a devastating and deadly but rare blood disease that coagulates the blood. The clinic’s head doctor, Dr. Nikols, arranges for the boy to room next to Michael Morbius, a very smart, slightly older boy. Michael calls Lucien “Milo,” the same name as the two previous boys who roomed with him, who, sadly, died. Because of their disease, both Lucien, aka Milo, and Michael must use two canes to walk.

One day, Dr. Nikols comes to Michael and tells him he’s shown tremendous promise on his math and science scores. He’s found a special school in New York City for Michael, to give him the opportunities he needs to make something of his life before his disease finally strikes him down sometime in the future.

Michael leaves a note for his friend Milo. Milo is touched when he reads the letter, but the letter accidentally flies out the window. Milo takes his two canes to go outside to retrieve the letter, but some bullies mock his disability and start to beat him up. In the nick of time, Dr. Nikols arrives to stop them.

Back to the future. Michael has become a world-renowned scientist who’s developed a valuable artificial blood plasma that’s used worldwide. Michael now works with a brilliant female doctor, Martine Bancroft, to develop a cure for his own blood disease. Michael thinks he may have found a cure, but the possible cure means developing a serum from the blood of vampire bats. Michael visits Milo, who’s moved to New York City with Dr. Nikols, and tells Milo that the possible cure is very experimental and probably illegal. So, he’ll have to do a human test in international waters.

Cut to Michael and Martine traveling on a large boat in international waters off Long Island. In a lab in the ship’s hold, they are preparing the vampire bat serum for Michael to inject. For some inexplicable reason, the men on the boat have powerful rifles and pistols.

When Michael injects the serum, however, he turns into a raging monster with long nails and vampire teeth. The gunmen on the boat see what’s happening. They enter the lab and start firing at Michael. He attacks them. During the fight, Martine is knocked unconscious. At one point, even though Michael seems trapped in a room, he bursts through the steel wall to kill the rest of the gunmen.

Two or so hours later, the boat drifts into a harbor in the city. Two FBI agents, Stroud and Rodriguez, arrive on the bat to investigate while CSI people go over the crime scene. The agents ask Martine what happened, but she protects Michael and feigns memory loss.

Meanwhile, Michael has escaped unnoticed into the city. He visits their unoccupied lab and starts testing himself to see what happened. Michael finds that his strength and hearing have improved significantly. He’s also able to make great leaps, climb and hang upside down. However, Michael discovers he has an insatiable need to drink human blood. Michael starts drinking the artificial blood he invented, but he finds that its effectiveness is slowly wearing off over time. It’s only a matter of days or weeks before it will be totally ineffective.

Milo discovers what happened, that Michael has apparently cured himself. He visits the lab and asks Michael to inject him with the serum. Michael refuses. However, Milo steals some serum and turns himself into a vampire monster. Unlike Michael, though, Milo has no intention of drinking artificial blood. He embraces the vampire lifestyle and asks Michael to do the same. Michael tries to stop Milo. The two men fight, but Milo ends up killing some police officers.

Can Michael find a way to stop Milo? Can Michael and Martine find a solution to the vampire bloodlust that infects both him and Milo?

MORBIUS is a horror movie and a science fiction thriller. As such, it does what it’s designed to do – provide moviegoers with some scary, exciting moments. Otherwise, however, the movie’s story is rather sketchy and simple. For example, the story just comes down to the title character’s

conflict with his friend, who’s turned to evil. Also, the movie never resolves the second question of what Morbius is going to do when the artificial blood he invented becomes ineffective.

MORBIUS has a humanist worldview, with one or two side references to evolution. However, the meat of the story involves several moral questions and issues, such as Michael’s attempt to stop his friend Milo’s murder spree, Michael’s efforts to find a cure for his disease, and Michael’s clear revulsion toward the idea of drinking actual human blood. Happily, MORBIUS has no lewd or explicit content. Also, the foul language is kept to a minimum. The violence is often rather intense, but not gory or super graphic. MOVIEGUIDE® still advises extreme caution because of the movie’s vampire themes about drinking human blood, intense violence, scary moments, and foul language.