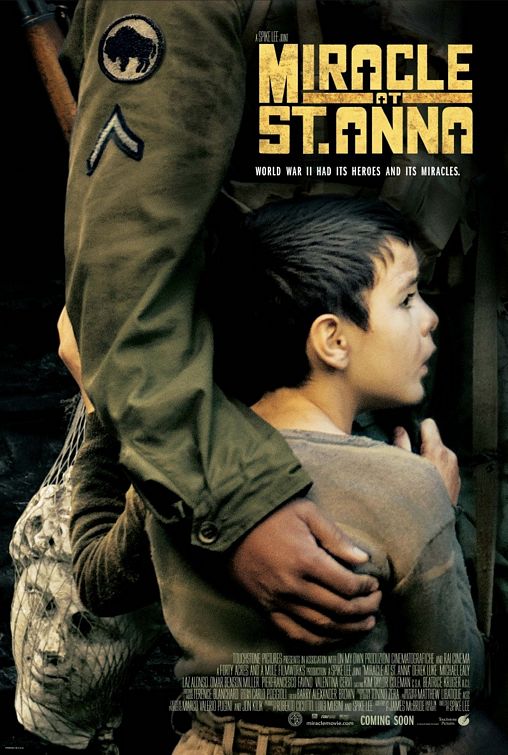 MIRACLE AT ST. ANNA opens in 1983 with an elderly black postal officer in New York shooting an elderly Italian immigrant in cold blood. As a reporter investigates the story behind the murder, the movie cuts to 1944 Italy during World War II. Four black soldiers get trapped behind enemy lines when one of them rescues an Italian boy affected by a terrible trauma. They befriend a group of Italians in a village abandoned by the Germans, but one of the Italian resistance fighters is a traitor. Things come to a head when the Germans begin to mobilize for a final assault on American troops across the river.

MIRACLE AT ST. ANNA is a very powerful movie showing the brutality of war, laced with a stunning, impressive, eloquent, and ultimately inspiring spirituality. The cast, coached by director Spike Lee, does a brilliant job. The movie has a very strong Christian worldview that ultimately focuses on God and Jesus, and on compassion and love. It contains, however, plenty of very strong war violence, foul language and some sexual content, including brief explicit nudity. This warrants extreme caution, even for older viewers.

(CC, BB, FR, Pa, PC, LLL, VVV, S, NN, A, D, M) Strong Christian worldview with references to Jesus and an ultimately uplifting ending with the song “He’s Got the Whole World in His Hands” over the end credits which, however, shows the graphic brutality of war and contains macho use of foul language, plus some mystical and antinomian elements reflecting the paganism of a humanity without God, and some light political correctness because the only two American Southerner characters with speaking parts are racists; about 74 obscenities, 22 strong profanities (only one or two referring to Jesus, most are GD), 11 light profanities; very strong, sometimes graphic and bloody war violence includes image of a stump of an arm and a leg, head wounds, people shot with pistols, rifles and machine guns, explosions, bombs falling, man lifts fallen beam off child, implied stabbing of an infant in massacre scene committed by National Socialists from Germany, man’s neck stabbed, citizens shot by troops, priest shot in head by National Socialist officer, National Socialist troops massacre civilians with machine guns, faces of dead soldier floating in river, etc.; implied fornication in two scenes (one set in 1944 and one set in 1983), woman dressed in lingerie in 1983 sits on man’s lap and kisses him passionately, and some crude comments about sex, especially by one soldier who’s not seen in a favorable light; upper female nudity when woman takes off garment to wash it and she lets a soldier see her, and upper female nudity of murdered mother who was suckling her infant before she died; alcohol use; smoking; and, treason, betrayal, man gets away with a crime though the crime may be justified in one sense.

Spike Lee’s MIRACLE AT ST. ANNA is a very powerful movie showing the brutality of war and extreme racism, laced with a stunning, impressive, eloquent, and ultimately inspiring spirituality. It contains content that requires extreme caution, however.

The movie opens in 1983 with an elderly black postal clerk in New York shooting an elderly Italian immigrant in cold blood. As a reporter investigates the story behind the murder, the movie cuts to 1944 Italy during World War II. While crossing a river, a bloody massacre of an all-black 92nd Division Buffalo Soldiers occurs when their white artillery commander doesn’t believe one man’s report of their position.

Four black soldiers, however, manage to make it to the German side of the river. They find themselves trapped behind enemy lines when one of them, Private Sam Train, rescues an Italian boy who has been driven mad by a terrible trauma of some kind. Train is a simple-minded Christian with a childlike faith. He believes the boy has been touched by Jesus.

The four soldiers, led by a compassionate, intelligent sergeant named Stamps, find their way to an Italian village abandoned by the Germans for the time being. The villagers welcome them, including a beautiful young woman named Renata whose elderly father is a fascist. The radio man among the four black soldiers, a Puerto Rican Catholic named Hector, finally gets hold of their commander, who orders them to capture a German soldier, to get information about German plans.

In the village, the soldiers also encounter a group of Italian partisan fighters, who have been betrayed by one of their own. The resistance fighters bring in a German soldier who has gone AWOL. The soldier recognizes the little boy protected by Private Train. This sets the stage for a final betrayal when the German forces mobilize for a final assault on the American forces across the river.

MIRACLE AT ST. ANNA starts off slowly. One scene early on is almost completely gratuitous and unnecessary. Once the viewer comes to know the four soldiers and the Italians they encounter, the movie becomes thoroughly captivating. Many of the movie’s images of the brutality of war, including the flashback of a massacre by the Germans of an Italian priest and his flock, are absolutely heartbreaking. In another scene, Spike Lee shows a thrilling, soul-stirring montage of different groups saying a Christian prayer, including a platoon of black troops behind American lines, the Italian partisans and the captured German soldier. All this is quite moving and eloquent.

The whole cast here does a brilliant job. The best of the best are probably Derek Luke as Sgt. Stamps, Omar Benson Miller as Private Train and Matteo Sciabordi as Angelo, the little Italian boy. It is their stories and their performances that hold the movie together. Then, in the movie’s climactic scenes, Laz Alonso as Hector, the Catholic soldier, becomes the viewer’s emotionally powerful guide, setting the stage for the story’s denouement.

MIRACLE AT ST. ANNA has a very strong Christian worldview that’s ultimately very inspiring. This positive side of the movie is diminished, however, by graphic war violence, lots of strong foul language and some sexual content, including a scene with upper female nudity. This content requires extreme caution, even for older viewers (see CONTENT section above for details).

In the movie’s other content, Private Train believes that the head of an Italian statue he carries has some mystical power from God. The marble head becomes a strange talisman for Train. Also, the movie seems to excuse some morally questionable behavior by some characters, including at the end. This can lead to antinomianism, the false doctrine that God’s basic moral laws are not universally applicable.

In spite of all this, an image of the Cross of Jesus plays an important symbolic role in the movie’s very last scene. This is followed by a choir singing “He’s Got the Whole World in His Hands” over the end credits. The movie’s ultimate focus, therefore, is on God and Jesus, and on compassion and love. Hence, the movie’s wonderful title, MIRACLE AT ST. ANNA.