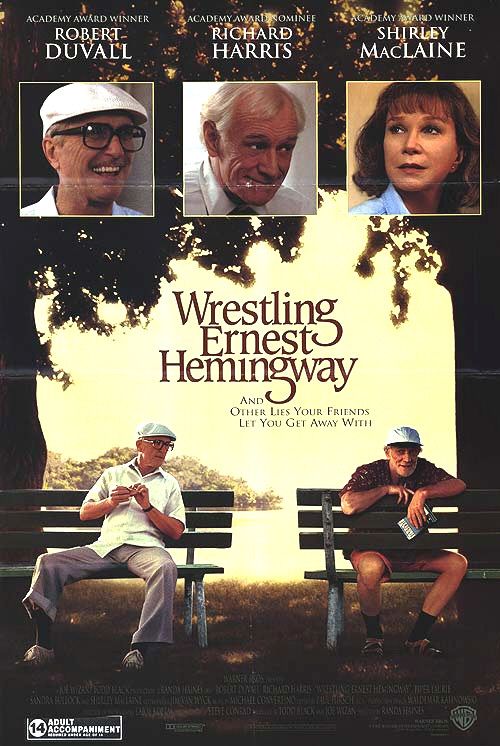 WRESTLING ERNEST HEMINGWAY is a poignant character study of an unlikely friendship between two elderly men in South Florida. Richard Harris' drunken ex-sailor and Robert Duvall's gentlemanly Cuban barber are expertly written and portrayed. Coarse language from Harris' character, and the lack of any spiritual frame of reference, are drawbacks to this otherwise worthwhile film.

(LL, N, S, A/D) 16 obscenities & 20 profanities, as well as several coarse references to sex, nearly all spoken by one character; brief rear-male nudity; very brief fondling of female breast; and, extensive alcohol use by one character (not condoned).

In WRESTLING ERNEST HEMINGWAY, Randa Haines directs veteran actors Robert Duvall and Richard Harris in a simple act of generosity that becomes one of the most poignant scenes in film history. Frank (Richard Harris) is the quintessential drunken ex-sailor: coarse and profane; sexually amoral; and, alone. His crude advances to his landlady (Shirley MacLaine) are bluntly rebuffed. Frank’s claim to fame is that he took on a barroom challenge from Ernest Hemingway fifty years ago. Frank happens to intrude on Walt (Robert Duvall), a Cuban emigre who is retired from barbering. Even though he is a perfect gentleman, he is as lonely as Frank. As might be expected, a friendship between such distant souls doesn’t come easily. In fact, Walt can’t stand the old sailor’s foul language and tells him so in a couple of stinging and well-deserved rebukes.

Both Richard Harris and Robert Duvall are superb in WRESTLING ERNEST HEMINGWAY, but the latter’s complete, understated submersion into the character of Walt is the best performance of his career, and worthy of an Academy Award. As mentioned, the language is at times extremely coarse, and the lack of any spiritual frame of reference disappointing. However, with those cautions and limitations, this is one of the best character studies in many months.