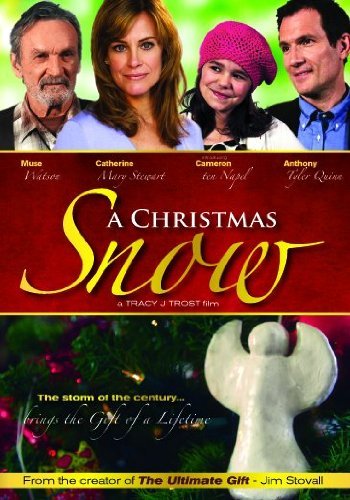 A CHRISTMAS SNOW is one of the better Christian movies. Kathleen Mitchell, whose father abandoned her at Christmas when she was 10, runs a restaurant and insists on keeping it open for Christmas. Her boyfriend has to travel and leaves his own 10-year-old daughter, Lucy, with Kathleen. Lucy hates Kathleen because her mother just died and she doesn’t want Kathleen to replace her. Late at night, Kathleen goes out to buy some things to help Lucy with her Nativity play costume. When she comes out of the market, two teenage thugs try to rob her. An old man intercedes but gets hit on the head with a skateboard. Feeling sorry for the old man, Kathleen takes him home. When the snowstorm leaves them stranded in Kathleen’s house, the old man helps Kathleen and Lucy open up to each other and to the story of Jesus.

A CHRISTMAS SNOW is a well-directed, well-acted, evangelistic movie. The Gospel is presented in a very winsome, compelling way. The movie’s ending comes as almost a complete surprise but raises some theological questions. The weakest part is the lack of jeopardy for long stretches of the story.

(CCC, BBB, O, V, M) Very strong evangelistic Christian, biblical movie with repeated readings of the Nativity Story about the virgin birth of Jesus Christ, explicit testimony of being saved, and explicit requests for grown daughter to be saved, with a character that may be a ghost a la THE SIXTH SENSE but it’s more ambiguous; no foul language; light violence but no blood includes man gets hit by car, two teenage robbers hit man with skateboard, woman gets word of father’s death; no sex or sexual immorality but two characters at restaurant seem to somewhat effeminate; no nudity; no alcohol; no smoking; and, discussion of therapist in scene where young girl tries to psychoanalyze young woman.

A CHRISTMAS SNOW is a well-directed, well-acted, evangelistic movie.

Kathleen Mitchell is a 10-year-old girl putting up Christmas decorations when her father walks out on her life. Cut to Kathleen as a middle-aged woman who runs a restaurant and insists on keeping it open for Christmas. The food critic has just called her the Christmas Grinch. Her boyfriend has to go away on business just before Christmas and leaves his 10-year-old daughter, Lucy, with her.

Lucy hates Kathleen because her mother has just died and she doesn’t want Kathleen to replace her mother. She is desperately afraid her father is going to forget about her when he marries Kathleen. Kathleen and Lucy are so similar that they do not get along at all.

Late at night, Kathleen has to go out to buy some sewing stuff to help Lucy with her costume for the Christmas Nativity play. Since the snow is picking up, she cannot see when she bumps her car into a man walking across the street. When she comes out of the mini market, two teenage thugs try to rob her. The old man intercedes to protect her, but gets hit on the head with a skateboard.

Slowly, Kathleen opens up to Lucy with Sam’s help. Sam tells her he made many wrong decisions in his life, but a young man explained the Gospel story to him. Kathleen and Lucy start opening up to each other and to the story of Jesus. The ending is a complete surprise.

A CHRISTMAS SNOW is one of the better-directed and acted Christian movies. The Gospel is presented in a very winsome, compelling way.

The movie’s ending comes as a surprise, although there are some clues that one character is more than he appears to be. There is the nagging and troubling theological question, however, that he may be a ghost, or at least an IT’S A WONDERFUL LIFE type angel.

The weak part of the movie dramatically is the lack of jeopardy. For long stretches of the story, there seems to be no jeopardy at all. Thus, the movie is more of a TV movie than a theatrical movie. Even so, MOVIEGUIDE® commends the filmmakers for A CHRISTMAS SNOW.

Rent or Buy A CHRISTMAS SNOW: