"A Young Boy Comes to Terms with His Mother’s Illness" 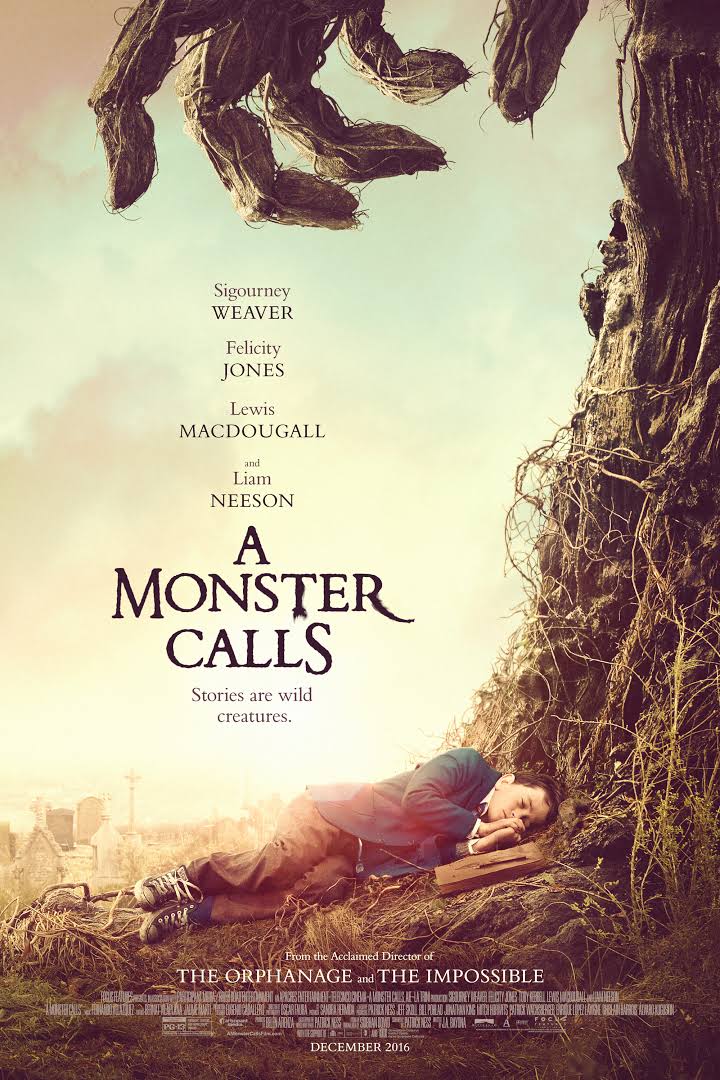 A MONSTER CALLS is a fantasy drama based on the novel by the same name about a young British boy coming to terms with his mother’s terminal illness. In the story, 12-year-old Conor lives with his divorced mother, who’s battling an illness that leaves her sick at home or in the hospital. Disinterested at school where he’s bullied, Conor frequently retreats to his imagination and drawings. In his imagination and dreams, he meets a monster made from a yew tree that tells him stories the monster claims will help Conor with his feelings. Can Conor reconcile his conflicted feelings of grief and fear?

A MONSTER CALLS is an incredibly imaginative, riveting movie with powerful performances and wonderful writing and direction. Thematically, the story has some positive moral, redemptive messages about grief and the bond between a mother and son. However, there are some elements of moral relativism that mitigate some positive elements. A MONSTER CALLS is fairly free of other objectionable content, but it has brief light foul language, a moderately scary monster and serious themes warranting caution for older children.

(BB, C, FR, Ab, O, L, V, A, M) Strong moral worldview values about dealing with grief and stressing the importance of family bonds, with light Christian, redemptive elements of faith, with a church seen multiple times; mitigated by moral relativism, and a false statement that “love isn’t enough” for a marriage to succeed; plus a reference to a witch, whom the Monster says is misunderstood; two light obscenities and one light profanity; light violence, such as a boy punches a bully multiple times in the face, a somewhat frightening tree monster is present in most of the story, some violent stories that involve murder are shown in water color form; no sexual content; no nudity, but sickly woman’s back is briefly seen; light alcohol consumption; no smoking or drug use; and, child disobedience, and some destructive behavior from child who throws a fit.

A MONSTER CALLS is a fantasy drama based on the novel by the same name about a young British boy coming to terms with his mother’s terminal illness.

In the story, 12-year-old Conor lives with his single mother (Felicity Jones) who’s battling an illness that leaves her sick at home or in the hospital. Disinterested at school where he’s bullied frequently, Conor frequently retreats to his imagination and drawings. If Conor looks out his bedroom window, across a field is a graveyard with an old church building and an enormous yew tree. His nightmare every night is that he’s in the graveyard with his mother and a sinkhole takes her away, and there’s nothing he can do about it.

As Conor’s mother gets increasingly more sick, his straitlaced grandmother (Sigourney Weaver) begins preparations for Conor to live with her while his mother stays at the hospital. Also, Conor’s father, who remarried and lives in Los Angeles, comes to visit Conor and his mother.

Every night, seven minutes past midnight, Conor in his dreams and imagination sees the giant yew tree in the graveyard come to life and turn into a monster. The monster (Liam Neeson) tells Conor he’s going to tell him three stories. After that, Conor must tell the monster his story and reveal his nightmare.

On different nights, the monster tells Conor tales of a prince at odds with a wicked stepmother, a parson willing to give up anything to save his two sick daughters, and a man who’s treated like he’s invisible by others and acts out violently. The stories don’t make much sense to Conor, who only really wants his mother to get better.

Eventually, Conor must come to terms with his mother’s illness. More importantly, he must let go of the guilt he has for his conflicted feelings about the terrible situation. Conor’s new friend, the Monster, helps Conor reveal his deepest secret.

A MONSTER CALLS is an incredibly imaginative, riveting movie from Director J. A. Bayona who made the equally gut-wrenching 2012 movie THE IMPOSSIBLE. With marvelous visuals, especially that of The Monster who’s voiced brilliantly by Liam Neeson, the movie’s simple storyline, combined with its powerful performances, results in a bonafide tear-jerker.

Thematically, the story has some positive messages about grief and the bond between a mother and son. Even Conor and his grandmother who are very disagreeable together learn to appreciate one another. Also, as The Monster tells Conor the tales that sound a bit like parables from the Bible, there are some positive lessons. In one particular tale told by the Monster set in the industrial age, an Apothecary (pharmacist) who specializes in old fashioned remedies from herbs and plants, gets into a battle with a reverend who preaches against the old fashioned remedies. When the kind parson’s own daughters become sick and no medicine or prayer helps, the parson pleads for the help of the apothecary, but the apothecary refuses to help, and the reverend’s daughters die. In telling Conor this story. the Monster condemns the reverend instead of the apothecary because the reverend was “a man of faith with no faith.” The Monster adds that Conor should be careful where and in whom he puts his belief.

(SPOILERS FOLLOW) In the end, Conor must come to term with the fact that at times, he’s wished his mother would just die and her pain would be over, while also grappling with the wish he doesn’t want her to go. This tension is addressed in one particular story told by the Monster where he shows that humans are complicated and messy, and don’t always fall into black and white lines, but rather in the grey area in between. This isn’t a false statement, if combined with the Christian, biblical perspective that we’re all sinners with shared common grace from God. However, it could be problematic if coupled with moral relativism. (END OF SPOILERS)

Overall, A MONSTER CALLS isn’t a story of hope and healing, but rather of grief and letting go. Those looking to be challenged or stretched while watching movies may find A MONSTER CALLS emotionally therapeutic. However, anyone looking for escapism on a more uplifting level may want to avoid it.

A MONSTER CALLS is fairly free of objectionable content. However, there’s some brief light foul language, a moderately scary monster and serious themes that warrant caution for older children.

Rent or Buy A MONSTER CALLS: