"Don’t Get Conned into Seeing This Movie" 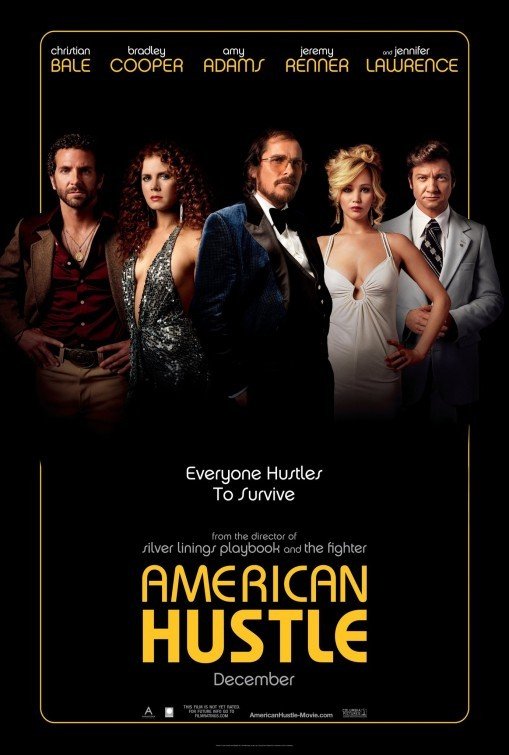 AMERICAN HUSTLE is a crime drama roughly based on the FBI ABSCAM operation in the 1970s that put several Congressmen in jail for bribery. It follows two con artists, the married Irving and his new girlfriend Sydney, who are blackmailed into helping the FBI catch corrupt politicians by offering them bribes. As the story plays out, Syndey gets close to their FBI handler. Irving gets jealous. Finally, Irving’s unpredictable wife jeopardizes the operation with her big mouth.

Director David O. Russell of SILVER LININGS PLAYBOOK delivers an interesting, but ultimately uninspiring story, in AMERICAN HUSTLE. The movie fails to compel the audience into caring for any of the characters. Their quirks and eccentrics, though entertaining at moments, offer no substance whatsoever. Also, the story lacks pacing and mystery, especially for a story about con artists. Though there are a few references to God and principles like the Golden Rule, the worldview presented is predominately pagan. Thievery, corruption, and adultery are just a few of the moral lapses in the movie. This, and multiple vulgarities and lewd scenes, make AMERICAN HUSTLE excessive and unappealing.

(PaPaPa, C, B, S, LLL, V, SS, NN, AA, DD, MM) Very strong pagan worldview portrayed in characters immoral lifestyle of thievery, corruption, and adultery, two non irreverent references to God, and a light moral element when the main character leaves his life of stealing; at least 130 obscenities (including about 90 “f” words), 16 profanities a shot of a woman urinating; light violence includes man is shot several times in the back and another character is punched and hit several times; strong sexual content includes one adulterous sex scene from the head up, a few other salacious scenes that almost lead to sex, a woman randomly kisses another woman, men and woman dance provocatively and fondle each other, some strippers are seen briefly in a club and some bikini clad woman at a pool party; brief upper and rear female nudity, one woman wears dresses with plunging necklines throughout the entire movie, upper male nudity; lots of drinking and some drunkenness; heavy smoking, plus marijuana use; and strong immoral behavior, includes lying, stealing, bribery, and blackmail.

AMERICAN HUSTLE is a crime drama roughly based on the FBI ABSCAM operation in the 1970s that put several Congressman in jail for accepting bribes.

The movie stars Christian Bale as Irving Rosenfeld, a brilliant con man who, from a very early age, learned how to manipulate and deceive people. Already running several fraudulent businesses, Irving falls in love and partners with a stripper, Sydney Prosser (Amy Adams). She joins Irving in scamming needy families and small businessmen through a fake loan business. Using a false identity, Sydney pretends to be British royalty with banking connections. It’s not long until the money starts to flow. To no surprise, it’s revealed that Irving has a irresponsible wife, Rosalyn (Jennifer Lawrence), who lounges at home, barely taking care of her young son.

During one of Irving and Sydney’s cons, they get busted by an over-zealous FBI agent, Richie DiMaso (Bradley Cooper). With no options, Richie strong arms Irving and Sydney into helping the FBI catch white collar criminals in exchange for immunity. Their target, is Carmine Polito. Carmine is a seemingly perfect mayor of impoverished Camden, New Jersey involved in some shady business. If they can convince Carmine to go into business with them, they might be able to catch some corrupt politicians in the act of bribery. As the con takes place, Sydney gets close to Richie, Irving grows jealous, and the unpredictable Rosalyn jeopardizes the entire operation with her big mouth.

Acclaimed Director David O. Russell of last year’s SILVER LININGS PLAYBOOK delivers an interesting, but ultimately uninspiring story in AMERICAN HUSTLE. Like his previous movie, Russell’s foul-mouthed characters exude vulgarities. Unlike SILVER LININGS PLAYBOOK, however, AMERICAN HUSTLE fails to compel the audience into caring for any of the characters. Their quirks and eccentrics, though entertaining at moments, offer no substance whatsoever. The long and drawn-out story lacks pacing and mystery, especially for being a story about con artists. That said, the acting is commendable, especially for Jennifer Lawrence and Christian Bale who transform themselves completely into their characters. The 1970s era sets don’t distract much from the story, but they don’t help it either.

Though there are a few references to God and principles like the Golden Rule, the worldview presented in the character actions are predominately pagan. Thievery, corruption, and adultery are just a few of the behaviors on display. The only redemptive element lies in Irving, who truly wants to protect his adopted son and who lso goes legitimate with Sydney in the end. Even so, the movie never addressees the moral gravity of the crimes they committed and the lives they ruined. It’s ultimately the heartless off-the-rail nature of almost all the characters that will leave a disconnect with a lot of people. This, and the multiple vulgarities and lewd scenes, make AMERICAN HUSTLE excessive and unappealing.