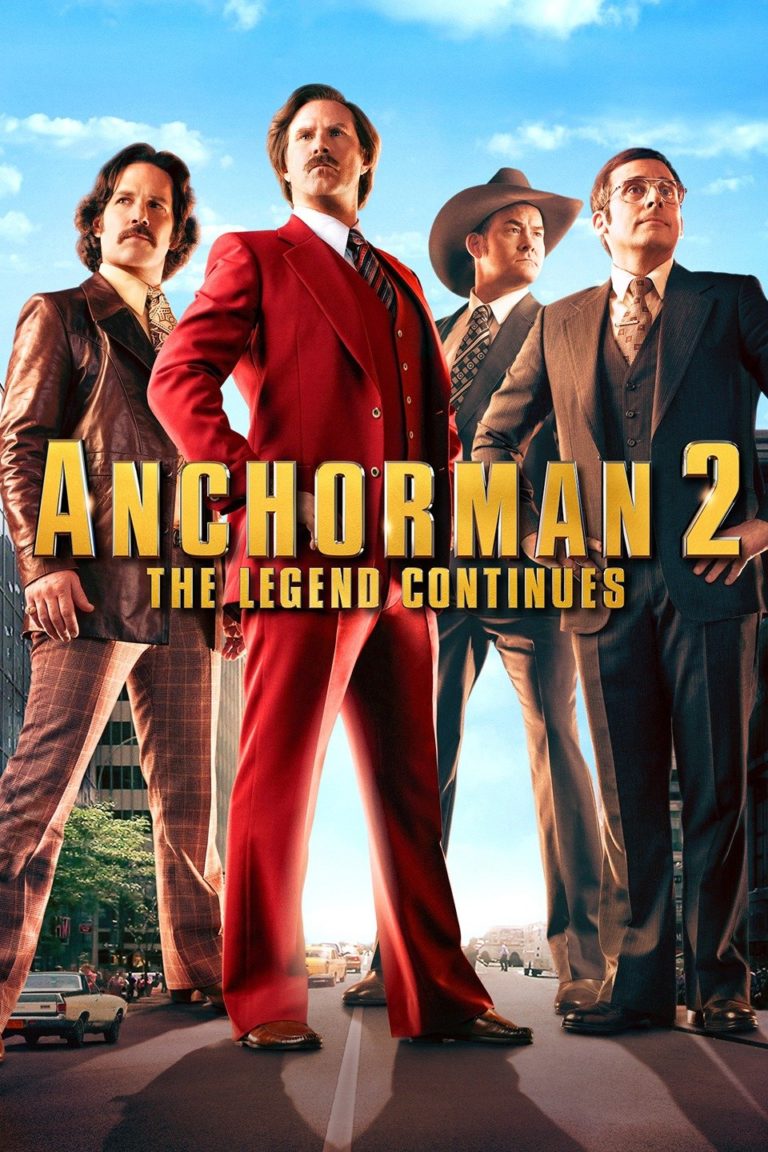 ANCHORMAN 2: THE LEGEND CONTINUES is an epic-scaled sequel to a 2004 comedy. Six years later, San Diego news anchorman Ron Burgundy is now married to Veronica Corningstone. They both share a job hosting weekend news in New York City and a 6-year-old son. Their channel’s top anchorman retires and offers to hire Veronica as his replacement while firing Ron altogether. Ron tells Veronica to choose between the job and their marriage. When she takes the job, he winds up as a drunken announcer at Sea World back in San Diego. Things change when a producer from a new 24-hour Cable news channel offers to hire Ron and his friends for the graveyard shift.

There are a million plot threads running through ANCHORMAN 2’s ambitious two-hour-plus running time. However, it has a surprising, cohesive amount of humorous creativity. Better yet, the second half shows Ron learning to be a better husband and father after suffering a ridiculous accident. Even so, the movie’s cleaner parts are mixed with lots of scatological humor, lewd innuendoes, and crude language. So, ANCHORMAN 2 warrants extreme caution.

(PaPa, BB, C, O, LL, VV, SS, AA, DD, MM) Strong mixed pagan worldview with some moral and immoral elements, including married couple breaks up and sleep with other people before returning to one another in “feel good” comic ending, scatological humor, comical innuendoes, vulgarities, comic hero Ron forced to lose his ego and become a better husband, father, and friend, some touching moments between father and young son, but father also gives inappropriate advice to son, and hero sincerely asks for God’s help in an awkwardly comical way, plus father scares young son while discussing the dangers of occult voodoo; about 26 to 31 obscenities and profanities, plus some scatological language and humor; ridiculous extended fight scene where competing news teams use all manner of ridiculous and historic weapons, from pitchforks to giant laser guns, to wage war on each other and comic hero tries to hang himself but fails comically; strong and light sexual content (mostly in a comical context) includes married couple separate and take other lovers but come back, implied interracial fornication under bed sheets in comical scene, TV news person discusses female genitalia of celebrities, passionate kissing, married couple discuss their lovers during a breakup while their 6-year-old son overhears, and miscellaneous references; no nudity; alcohol use and brief drunkenness; 1980s newsmen try new drug crack cocaine on camera and depressed man says he’s used it six other times; and, man accidentally says racially inappropriate things during awkward dinner with black girlfriend’s family, egotism, selfishness, stupidity.

ANCHORMAN 2: THE LEGEND CONTINUES is an epic-scaled sequel to the 2004 cult comedy ANCHORMAN: THE ADVENTURES OF RON BURGUNDY. ANCHORMAN 2 has a strong mixed pagan worldview, with seemingly countless innuendoes, vulgarities, and double entendres, but it also contains a lot of goofy fun, with a strong and even touching pro-family, pro-fatherhood message at the end.

The sequel picks up six years after the first movie left off in its depiction of San Diego local news anchorman Ron Burgundy (Will Ferrell) and his team of sidekick newsmen (Paul Rudd as a reporter, Steve Carell as the weatherman, and David Koechner as the sports anchor). Ron is now married to Veronica Corningstone (Christina Applegate). They both share a job hosting weekend news in New York City and a 6-year-old son. When their channel’s top anchorman retires and offers to hire Veronica as his replacement while firing Ron altogether, Ron orders her to choose between the job and their marriage. When she takes the job, he winds up as a drunken announcer at Sea World back in San Diego.

Ron soon loses his Sea World job due to making inappropriate comments on the microphone. He tries to commit suicide by hanging yet fails comically. Just then, a producer from a new 24-hour Cable news channel called Global News Network (GNN) arrives. He hires Ron and his team to do the new channel’s graveyard shift.

Ron sees this as a chance to move back to New York and win back Veronica. However, he finds out she has a new lover. He also runs afoul of a young, better anchorman and winds up engaged in a bet that will change his life and the course of American news itself. He bets he can beat the other newsman’s viewer ratings, and then wins the bet by “giving the people what they WANT to see, not what they NEED to see.”

What they want to see is car chases on the freeway and cute pets running through American flags, as well as lurid stories of outrageous crimes. As Ron takes over the primetime spot and wins some Emmys, he finds his black female producer wants to have an affair with him. Ron suddenly has to choose between the wild trappings of big city success or the simple pleasures of a stable family.

There are many other plot threads running through the ambitious two-hour-plus running time of ANCHORMAN 2. Those who enjoy this kind of comedy may be astounded by the fact that Will Farrell and his director and co-writer, Adam McKay, have written a movie that never falls flat through all the complex antics involved. Artistically, it’s an amazing piece of work, with an impressive, unique level of inventiveness.

Better yet, the movie’s second half is about Ron learning to be a better husband and father and coworker after suffering a ridiculous accident that leaves him blind. This second half actually takes on a pro-family, pro-marriage, and pro-fatherhood tone. In addition, its satirical points on how pointless and tawdry modern TV news has become makes some valid points without resorting to partisanship. One can hardly disagree with Ron’s final words to his viewers, urging them to demand that they are simply told the truth by their newsmen and their politicians.

With so many jokes packed across such a long running time, even the large amount of scatological humor and lewd innuendos are outnumbered by lots of somewhat innocent, goofy humor. However, though many of the movie’s crude jokes are silly and ridiculous, they warrant extreme caution. ANCHORMAN 2 also contains plenty of foul language, including some vulgar, scatological language.