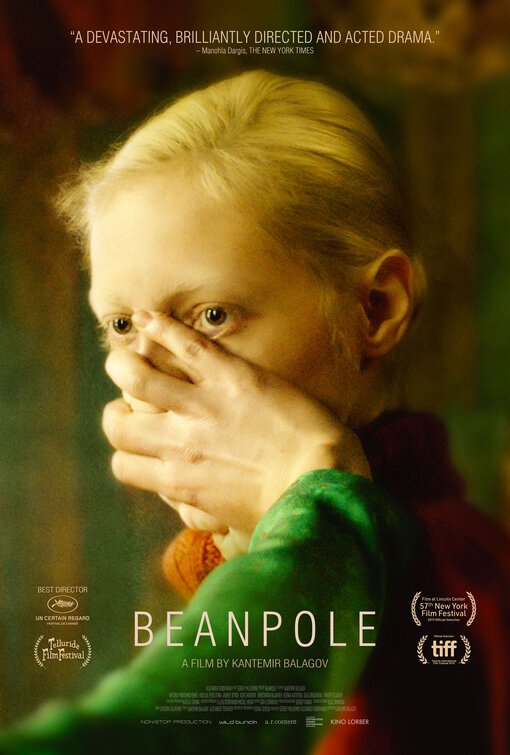 BEANPOLE, an acclaimed Russian drama, takes place directly after World War II, as a very tall Russian girl navigates this devastating life, trying not to lose her closest friend. Iya works as a hospital nurse in Leningrad. People are suffering, and wounded soldiers are still being brought into the hospital. A head injury forced Iya off the front lines. Meanwhile, she takes care of her friend Masha’s young son while Masha is away. The boy dies in a terrible accident related to Iya’s injury. When Masha returns from war and finds out what happens, she will do whatever it takes to get another child.

BEANPOLE is very European. The movie is a character study but still has a distinct storyline. Although it sometimes drags, it’s easy to be drawn into the story and characters. There’s too much immorality in BEANPOLE, however, and not much that leads to any redeeming qualities. The worldview is mostly pagan and humanist, without any moral guidelines that lead the characters to make their decisions. BEANPOLE also contains extreme explicit nudity, strong lewd content and some disturbing scenes.

(PaPa, H, Ho, L, VV, SS, NNN, A, D, MM):
Dominant Worldview and Other Worldview Content/Elements:
Mixed pagan, humanist worldview where anything goes and whoever is in control can make anyone do whatever they like, it’s insinuated that the nurses and doctors in a hospital often euthanize extremely wounded soldiers, and the more aggressive main character does whatever she wants and makes others do the same, including the main motivation for her is wanting a child to replace the one she lost, and she will do whatever it takes to have one, plus one woman has romantic feelings for her female friend
Foul Language:
One curse word and one use of God’s name in vain, one example of vomiting
Violence:
Some disturbing and bloody images involving wounded soldiers in a hospital, a girl is said to have broken a guy’s arm, some hitting and slapping, a city tram runs over a character
Sex:
Strong sexual content, one sex scene in the backseat of a car, a girl and man are blackmailed into making a baby together, and the scene is quite uncomfortable, and it’s said that girls would do whatever they needed to do during war to survive and have “many husbands”
Nudity:
Full female nudity shown dozens of times, one extensive bath house scene showing full frontal women everywhere, upper female nudity shown multiple times besides the bath scene, a young boy is shown in the bath
Alcohol Use:
Light alcohol use throughout
Smoking and/or Drug Use and Abuse:
Cigarette use throughout, and a medicine is used to assist in killing a wounded soldier; and,
Miscellaneous Immorality:
Examples of blackmail as a young woman threatens two people to make them have a baby for her, and a young woman lies about the manner in which a young boy dies.

BEANPOLE takes place in Leningrad, Russia after the devastation of World War II, with the common people suffering greatly, and soldiers still being brought into the hospitals.

Iya, more commonly known as “Beanpole” because of her extremely tall and thin stature, is a nurse at a hospital after she was released from her war duties. She was excused from her call to the army because of a concussion that sometimes causes her to have episodes where her body shuts down and she has difficulty breathing. She makes her daily commute to the hospital with a little boy named Pashka, who plays with the soldiers during the day while she works.

One night, she’s getting some work done, but Pashka wants to play. She begins chasing him around the room, tickling and wrestling with him. Suddenly, she is on top of him as he is giggling and attempting to fight her off, one of Beanpole’s episodes begins. She uncontrollably begins to shut down and struggles to breathe, as her whole body weight sits heavily on top of Pashka’s tiny skeleton. His little hand tries to push her off, as he begs her to stop playing, but she is unable to move. Pashka’s struggling gets weaker and weaker as the life begins to leave his body, and soon he’s lying there lifeless underneath her.

Iya goes to work severely depressed without the little one by her side, but she’s soon greeted by her good friend, Masha, who has finally returned from her war duties. They met in the army and became very close but were separated when Iya was released because of her head injury. In fact, the movie hints that Iya has unrequited romantic feelings for Masha. Masha shows Iya everything that she brings in her suitcase, including some presents and some cute new clothes for them to wear on dates. Masha asks multiple times about her son, Pashka, but Iya is unable to answer her. Masha quickly realizes her little boy has died, with Iya lying that he passed away in his sleep.

Although it’s great to have her friend with her once again, Masha likes to walk a bit more on the wild side. Reluctantly, Iya soon finds herself in a car with her friend and two young men. After she is basically forced to take a walk with one of them, Masha sleeps with the other one in the backseat of the car. Beanpole returns and rips the young man out of the car, giving him a few good slaps before taking Masha away with her.

Masha explains to Iya that she’s desperate for a child and will do whatever it takes. However, soon the doctor reminds her that the organs that are required for childbirth are no longer in her body, so Masha has to create a new plan. She demands that Iya must give birth for her. Over Iya’s protests, Masha forces Iya to sleep with her boss, a doctor who’s being blackmailed by Masha to sleep with Iya. Iya didn’t want to sleep with the doctor, but she feels she can’t lose Masha, the one person she really loves.

BEANPOLE is very European. The movie is a character study but still has a distinct storyline. Although it sometimes drags a bit, it’s easy to be drawn into the story and characters. There’s quite a bit of immorality in BEANPOLE, however, and not much that leads to any redeeming qualities. The worldview is mostly pagan and humanist, without any moral guidelines that lead the characters to make their decisions. BEANPOLE also contains extreme explicit nudity, strong lewd content and some disturbing scenes.