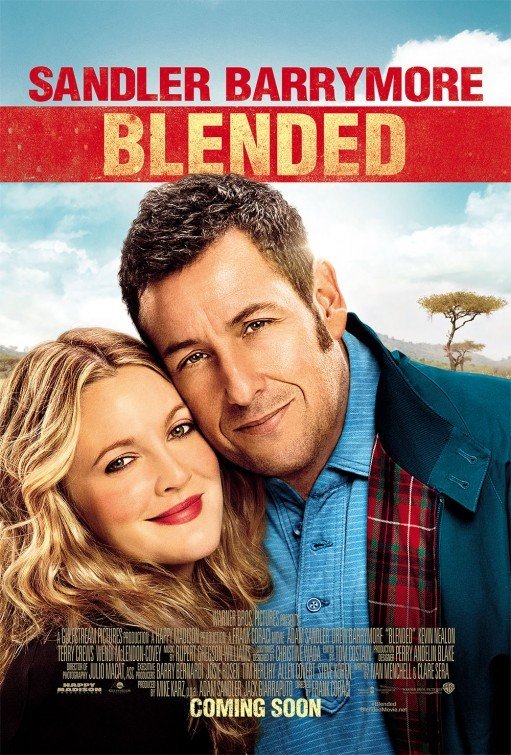 BLENDED is a romantic comedy starring Adam Sandler and Drew Barrymore as two single parents, a divorcee named Lauren and a widower named Jim. Jim and Lauren have a disastrous blind date and never want to see each other again. Unexpectedly, they discover Jim’s boss is dating Lauren’s best friend. After a fight, the boss and best friend cancel their romantic African vacation together with their respective children. Lauren’s friend gives Lauren her tickets, while Jim buys his boss’s tickets. Thus, unwittingly, Lauren and Jim have accidentally set themselves up for the same long vacation together. As Jim and Lauren bond with their sometimes rebellious children, they are forced to get to know each other.

After an episodic, badly plotted beginning, BLENDED picks up comical and emotional steam in Africa. Things become highly enjoyable as the movie hits its stride with a mix of funny, emotional and rewarding moments. Overall, it has a pro-family moral worldview. This positive, uplifting content is marred, however, by Romantic elements, foul language, light homosexual references and too many sexual innuendoes and references. So, MOVIEGUIDE® advises strong caution.

(BB, Ro, Ho, LL, V, SS, N, A, M) Strong moral, pro-family worldview stressing strong bonds between parents and children, good parenting, and training children to behave, marred by some Romantic, rebellious elements and some light homosexual references such as two women are assumed to be lesbians because of a misunderstood photo, resort host welcomes homosexual couple, and obese Indian woman looks lustfully at a woman who’s dressed up, and Indian’s husband scolds her; 19 obscenities (including a couple “s,” “d,” a**, and “-itch” words and several body part descriptions), four light profanities, woman vomits, brief potty humor, a few vulgarities such as “crap,” a little girl mentions the word “vagina” twice in a non-sexual context, and woman insults some adults while defending a child they’ve insulted first; light slapstick violence, such as boy runs through his house with a burning shirt on a stick before his brother extinguishes it and makes a mess, female lead keeps knocking son’s head against doorways and doors while she carries him to bed in a couple scenes, comic accident where male lead is thrown off a running ostrich and crashes into a water trough, and a funny scene where female lead is in danger of crashing her parachute into a rhino; no visual sex but lots of innuendoes adding up to strong content overall, including unfunny comical references to teenage self-abuse that appear to sanction such behavior, male protagonist takes woman on a date to Hooters where scantily clad waitresses flirt with him, references to soft pornography photos involving bikini-clad women, African resort tries to have unmarried couple share same bed, but they refuse, one man married to younger woman seen clutching her breasts during massage therapy instruction for couples, divorced woman’s husband had cheated on her, boyish teenage daughter shown wearing bra and looking frustrated in a mirror before stuffing her bra with shoe implants, a couple side characters mention their sex lives, a joke about Cialis (the “erectile dysfunction” drug), and some homosexual references include teenage girl with short haircut mistaken for a boy several times, and two women are mistakenly referred to as “closet queens”; upper male nudity and some female cleavage; alcohol use; no smoking or drugs; and, a reference to a child taking Ritalin, children are disrespectful to parents early in movie but are shown appreciating and reconciling with parents by the end and some pranks and insults.

BLENDED is a funny, sometimes touching romantic comedy starring Adam Sandler and Drew Barrymore as a widowed father and divorced mother who meet on a bad blind date and then are forced to share an African vacation together with their children. BLENDED has some strong moral content marred by Romantic undertones, brief homosexual references and foul language, including some crude and some implied sexual innuendoes.

The story follows two single parents, a divorcee named Lauren (Drew Barrymore) and a widower named Jim (Adam Sandler). Jim and Lauren have a disastrous blind date and wish never to see each other again. Through a series of twists, they discover Jim’s boss is dating Lauren’s best friend. Then, when the boss and best friend fight, their romantic trip to Africa with their respective children is canceled. Lauren’s friend gives Lauren her tickets, while Jim buys his boss’s tickets from him. Unwittingly, both Lauren and Jim have thus accidentally set themselves up for having the same long vacation together.

As Jim and Lauren each bond with their sometimes rebellious children, they are forced to get to know each other. They start to sympathize with the other’s life, making them wish they could blend their families together. The movie is mostly a series of silly situations, such as Jim riding ostriches with Lauren’s son or Lauren parasailing and nearly crash-landing into a rhino. These are mixed with sweet emotional moments of the parents bonding with their children in touching ways.

BLENDED has a lot of funny jokes, but some of the jokes contain various innuendoes, with some of them being a bit crude. The storyline is almost too simple and episodic, with not enough plotting in the first half hour or so. However, the cast gives it their all, especially when the movie picks up comedic and emotional steam in Africa. Things become highly enjoyable as the movie hits its stride with a mix of funny, emotional, and even rewarding moments. Overall, the movie has a pro-family moral worldview. This positive, uplifting content is marred, however, by Romantic elements, foul language, several light homosexual references, and too many comical sexual innuendoes and references (see the CONTENT section). So, MOVIEGUIDE® advises strong caution.