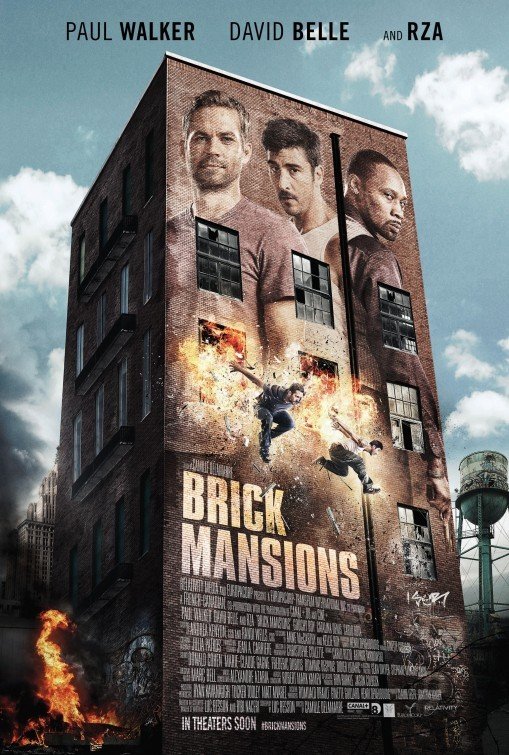 BRICK MANSIONS is a violence-packed thriller. It stars Paul Walker as Damien, an undercover cop in Detroit who believes his cop father was killed by a vigilante named Lino. When some heroin is stolen from a gang led by Tremaine and destroyed by Lino, Damien enters the Brick Mansions housing project where the drugs were headed to make up for the lost shipment. He uses this ploy to build trust from the criminals. However, Tremaine kidnaps Damien’s girlfriend, leading him to team up with Lino against Tremaine’s gang. Eventually, these two reluctant partners learn the real problem is a neutron bomb attached to a rocket set to go off in 10 hours.

While some of the stuntwork is fun, BRICK MANSIONS is tedious overall. It has a very sloppy plot that gets ever more ludicrous as it hurtles towards its finale. The characters barely get a chance to stand out. The lazy and generic dialogue doesn’t help. BRICK MANSIONS has plenty of foul language and even more violence, with a politically correct message about poor people oppressed by a corrupt city.

(RoRo, B, PCPC, AP, Pa, HoHo, LLL, VVV, S, N, A, DD, MM) Strong Romantic worldview with some moral elements where characters act on emotion, and includes some strong politically correct “Occupy Wall Street” content about poor people living in a corrupt city (Detroit) of wealthy and powerful people who isolate a rundown area and want eventually to replace it with a totally new development using nefarious means, and corrupt police are used by both corrupt official and the drug lord villain, plus some hedonistic and immoral pagan behavior, and female thug is portrayed as a lesbian who sexually threatens one protagonist’s captive girlfriend; at least 41 obscenities and profanities, plus some “n” words; very strong, sometimes brutal, violence but with little blood includes reckless car chases and foot chases constantly put innocent civilians, drivers and property in harm’s way, lots of punching and kicking, bullets fly frequently, one man shot in neck, one man stabbed in neck, one corrupt police official gets his head stuck in prison cell door before one of the ostensible heroes kicks him to snap his neck, large thug smashed over head with cinder block, a riot occurs, neutron bomb plot, and many dangerously-looking running and jumping stunts; no sex scenes per se but one scene implies hero is in a sexual relationship with his girlfriend, a crude gesture, and lesbian villain makes suggestive comments to captive woman while running a knife along her face, neck and cleavage and when they fight at the end she seems to get pleasure out of the rough action; upper male nudity and scantily clad women with some female cleavage; alcohol use; smoking and plot is about a drug dealer, whose actions are partly excused; and, lying, stealing, corruption, and some moral relativism.

BRICK MANSIONS is a violence-packed thriller about an undercover cop and an acrobatic vigilante who team up to take down a vicious drug lord in a Detroit housing project. BRICK MANSIONS has a strong Romantic worldview with plenty of foul language and violence, plus some lewd innuendo.

BRICK MANSIONS doesn’t have much of a plot between the wall to wall violence, but it follows a Detroit cop named Damien (played by the late Paul Walker) who believes his father, who was also a policeman, was killed by a vigilante named Lino (David Belle). When 20 kilos of heroin are stolen from a gang led by Tremaine (RZA) and destroyed by Lino, Damien volunteers to enter the Brick Mansions housing project where the drugs were headed and make up for the lost shipment.

Damien uses this ploy to build trust from the criminals surrounding him, but jumps too quickly to capture their crime lord and botches the arrest. Tremaine kidnaps Damien’s girlfriend and tries to use her as bait for Damien to bring a fresh 20 kilos of drugs to the Brick Mansions, a set up that leads to Damien teaming up with Lino against the gang even though he believes Lino killed his father.

However, both of these reluctant partners eventually learn that the real problem is a neutron bomb that has wound up inside Brick Mansions, and is in danger of exploding within 10 hours. Damien has to figure out how to stop it, leading to ludicrous twists that upend his entire investigation.

BRICK MANSIONS has a very sloppy plot that gets ever more ludicrous as it hurtles towards its finale. The characters (and the actors playing them) barely get a chance to stand out as individuals. The lazy and generic dialogue (which is also filled with midlevel foul language) doesn’t help matters.

Instead, brutality is the order of the day, with nonstop vehicular and foot chases, plus punching, kicking and shooting. Eventually, the movie becomes tiresome, especially because of some politically correct content and when one female villain turns is a scantily-clad lesbian who enjoys threatening Damien’s girlfriend with a knife while making sexual comments.

While some of the stuntwork is fun, BRICK MANSIONS is a tedious enterprise overall. It’s a shame that millions were spent to make and market a movie this shallow and pointlessly violent, and that this is the last film Paul Walker of the FAST & FURIOUS movies managed to complete before being killed in a car accident that could have been avoided.

The PC content helps give BRICK MANSIONS a Romantic worldview wherein poor people are at the mercy of a corrupt society. In reality, Detroit wasn’t destroyed by rich or wealthy people, but by power-mad labor unions and liberal politicians and judges.