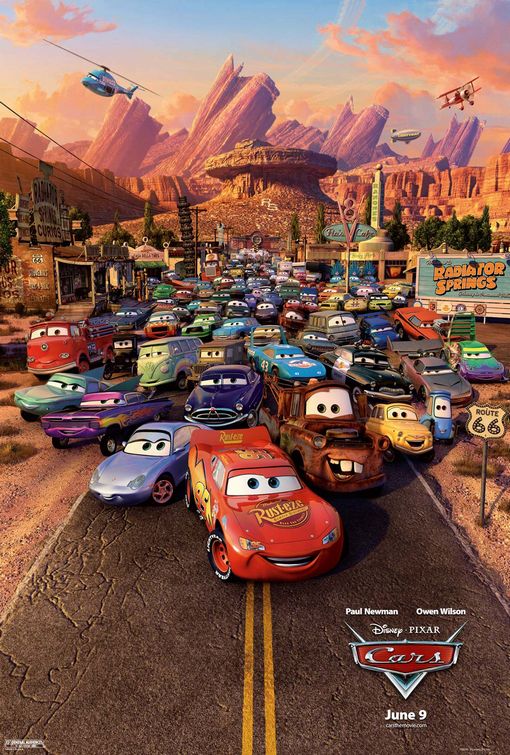 CARS, Pixar and Disney's new computer-animated movie, is a feast for the eyes and the heart. In the story, hotshot rookie racecar, Lightning McQueen, has his sights on winning the Piston Cup in a three-way race between two rivals. A series of coincidences strands Lightning in an isolated, rundown, small desert town called Radiator Springs, off Route 66. There, while rebuilding the main road he wrecked, Lightning encounters the quirky cars running the town and its various businesses. They teach Lightning the importance of integrity, caring for others and friendship. They also teach him that, sometimes, you have to lose yourself and slow down in order to find yourself and re-discover the values you lost.

As is the case with everything Pixar does, the computer animation in CARS is first-rate and gorgeous to watch. Fast-paced comedy isn't a primary goal here, but CARS more than makes up for it, in depth of feeling, creativity, intelligence, and excitement. The movie captures the old-fashioned values that made America and the American family great. Those values are worth preserving and celebrating, as well as emulating. CARS touched my heart and soul.

(BBB, CC, PPP, CapCapCap, L, V) Very strong moral worldview with redemptive moments and important moments that have a very strong, nostalgic feel for good old-fashioned, small-town American values and some of the bygone things that helped make America a great place to live, including lovable cars own their own businesses and reference to angels and sacrificial love demonstrated; two light exclamatory profanities ("O, Lord" and "My God"), some derivatives of the word "dang," one "heck," play on the word "butte," the phrase "Hillbilly Hell" comes up twice, and vehicles backfire occasionally to sound like passing gas; light, but exciting car racing and slapstick violence such as cartoon race cars crash, villain cartoon car bumps other cars to cause crashes or get ahead, a couple cartoon cars flip end over end, cartoon car lands in cactus a couple times, cartoon car accidentally tears up road, and monster harvesting machine chases cartoon car and cartoon tow truck; no sex, but romance develops between male cartoon car and female cartoon car, and male cartoon tow truck jokes that female cartoon car wants him "for my body"; no nudity; no alcohol; no smoking or drugs; and, nothing else objectionable.

CARS, Pixar’s new movie in conjunction with Disney Studios, is a feast for the eyes and the heart. It is a great movie that will be beloved by young and old alike.

Fast-paced comedy isn’t such a primary goal as in previous Pixar movies like the TOY STORY movies or MONSTERS, INC. The movie more than makes up for it, however, in nostalgic drama, character depth, a salute to a bygone era of Americana, and racecar action.

In the story, which takes its time developing, hotshot rookie racecar, Lightning McQueen (voiced by Owen Wilson), has his sights on winning the Piston Cup in a three-way race between rivals The King and Chick Hicks. A series of coincidences leaves Lightning stranded in an isolated, small desert town called Radiator Springs, off Route 66. There, Lightning gets into trouble with the law and the town judge for speeding and wrecking the main road. He is sentenced to re-build the road.

While Lightning works to rebuild the road so he can get to the champion race in California, he encounters all the quirky cars running the town and its various businesses. They teach Lightning the importance of integrity and caring for others instead of himself. They also teach him that winning isn’t everything, and that, sometimes, you have to lose yourself and slow down in order to find yourself and re-discover the values you lost. Or, the values you never knew you had.

As is the case with everything Pixar does, the computer animation in CARS is first-rate. New achievements in re-creating the real world in a fantasy setting are achieved. Not the least of these wonderful re-creations are the movie’s beautiful, colorful renderings of buildings, living cars, bugs made to look like tiny cars, roads, highways, scenery, and nighttime settings.

Despite the mixed pace of the story’s first part, the movie has a depth of feeling and the character arcs have a nostalgic depth that remind one of the most poignant moments in the great Pixar classic, TOY STORY II. This movie perfectly captures the old-fashioned values that made small-town America and the American family worth preserving and celebrating, as well as emulating.

American parents should start teaching their children some of these moral, American values before it’s too late. Prayerfully, it’s not too late. And, prayerfully, the international audience will see CARS so that they too can learn to appreciate, and even emulate, these values for themselves and their own children and grandchildren.

CARS is the best movie so far of 2006. I cried and laughed. It touched my heart and soul. Thank you so much, Pixar!