EAT THAT QUESTION: FRANK ZAPPA IN HIS OWN WORDS 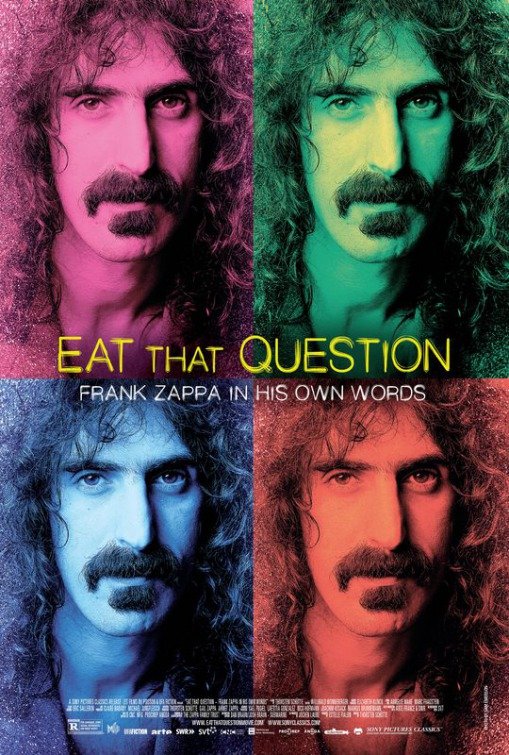 EAT THAT QUESTION: FRANK ZAPPA IN HIS OWN WORDS is a biographical documentary of rock, jazz and classical composer and performer Frank Zappa, who died at the age of 53 in 1993. Using old interviews and concert footage, the movie contains an overview of Zappa’s musical career, including his interest in rock and roll, jazz and classical music. A lot of his music was atonal, so it had limited appeal, but it could be brilliant. He also inserted a lot of comedy and satire in his work. Some of his lyrics were rather obscene and controversial, however.

The interviews with Zappa pretty much present his perspective on many things, including music, politics, art, sex, and life. Thus, the movie favors Zappa’s worldview, which was strongly Anti-Christian, humanist and anti-capitalist. In one interview, Zappa says that dirty words are a “fantasy that is manufactured by religious fanatics and governmental organizations to keep people stupid.” Ultimately, EAT THAT QUESTION fails to provide a truly in-depth examination of his music. It also turns out to be a propaganda piece for Zappa’s abhorrent worldview and irrational attitude.

(HHH, AbAb, RoRoRo, APAP, AcapAcap, Ho, LL, SS, NN, A, D, MM) Very strong humanist worldview with some strong Anti-Christian content when it comes to protecting children from obscenity and freedom of speech issues, plus a very strong Romantic view of art as purely personal expression, and some strong Anti-American, anti-capitalist comments by the title character, Frank Zappa; about 15 obscenities (including some “f” words) and three light exclamatory profanities; no violence; some crude sexual references, including a comical song about men concerned about the size of their sex organs and references to homosexuality; upper female nudity in one scene and upper male nudity in several scenes; some alcohol use; smoking and a rather utilitarian message against illegal drugs; and, strong cynicism, and no apparent transcendent objective standards.

Frank Zappa (1940-1993) was an iconoclastic, avant-garde rock and roll musician with a big talent for writing jazz and composing classical music. A good portion of his music, especially his rock music and his classical music, is atonal, which is an acquired taste. Sometimes it works, and sometimes it doesn’t. However, there’s no denying that when his music is good, it could be very good. In fact, even his more atonal riffs could be stimulating, inspired and nice to hear. So, his early death at 53 was still a tragedy. Sometimes, though, Zappa’s lyrics could be lewd or full of crude innuendo. One of his more famous controversial songs is a comical song about the size of male sex organs. Another comical song is about Alaskan husky dogs relieving themselves in the snow.

As a result of his iconoclastic attitude, lewd lyrics and atonal riffs, Zappa often found himself at odds with record label executives and even rock fans. He also ran up against Christians and conservatives who thought he crossed the lines of decency too often. This second conflict came to a head in 1985 when Vice President Al Gore’s wife, and others, began a campaign to urge record companies to put ratings labels on explicit, obscene content. Zappa went to Washington to testify against such labels, falsely comparing ratings labels to government censorship (censorship is when the government uses its law enforcement apparatus to ban certain content altogether).

EAT THAT QUESTION: FRANK ZAPPA IN HIS OWN WORDS is a biographical documentary of Zappa and his life, using interviews with the musician and concert and recording footage over the years. The interviews with Zappa pretty much present his perspective on many things, including music, politics, art, sex, and life. Thus, the movie expresses Zappa’s own worldview, which was very strong humanist and Anti-Christian, as well as Anti-American and anti-capitalist. Also, many of the interviews in EAT THAT QUESTION show Zappa ranting against the materialistic culture of America that, according to him, dulls the senses and makes people too “stupid,” in his opinion, especially too stupid to enjoy the high artistic quality of Zappa’s music. Of course, such a worldview is extremely egocentric because Zappa clearly considered himself one of the world’s greatest and smartest art experts and composers.

Eventually, this leads to Zappa’s confrontation with Christians and conservatives over music ratings. Here, Zappa’s atheist humanism comes to the fore as he mocks and ridicules Christians, especially Christian moralists. While it’s true that these moralists sometimes read too much into some of Zappa’s lyrics, Zappa uses that mistake to castigate everything that these Christians teach. In one interview, Zappa says that dirty words are a “fantasy that is manufactured by religious fanatics and governmental organizations to keep people stupid.”

Despite all this, however, Zappa was also notoriously anti-hippie and anti-drug. In one interview, he relates how he doesn’t care what his musicians drink or smoke before or after the current concert tour. They just better be sober while they’re playing in his band or orchestra. Apparently, this concern for sobriety was not a moral concern for Zappa but a concern to maintain the goal of “aesthetic enrichment” that he strongly believed his music and true art represented.

Ultimately, then, although EAT THAT QUESTION is an accurate general assessment of Zappa’s music, life and beliefs, it’s really just a propaganda piece for Zappa’s false, irrational humanist worldview. Also, it ultimately fails to enlighten viewers about his music in a truly in-depth way. Finally, though Zappa liked to rail against “stupidity,” his worldview left the world with no solid transcendent, objective or logical standards by which to decide what’s truly intelligent or worthwhile. That, dear readers, seems pretty stupid!