"Knights of the Air" 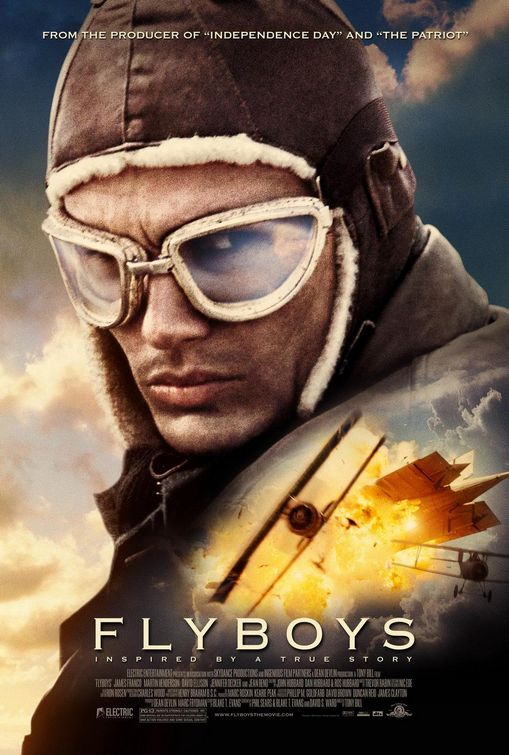 FLYBOYS is an exciting adventure yarn about the courageous American men who flew airplanes for the French in World War I. Known as the Lafayette Escadrille, these men became the first American heroes of the war before the U.S. entered it. It focuses on one of several recruits, Blaine Rawlings, a former Texas ranch owner played by James Franco. As the recruits learn to fly and shoot at the same time, Blaine falls for a young French maid, Lucienne, who is taking care of her two orphaned nephews and niece. Through Lucienne, Blaine learns firsthand the disturbing costs of the war for the French civilians. As the Germans gain ground, the chaos of war engulfs everyone, and the missions grow increasingly dangerous. Thoughts of idealism and thrill-seeking take a back seat to staying alive and protecting one's comrades and loved ones.

FLYBOYS is a stirring, poignant, heroic, and impressive adventure movie for mature audiences. It has a very strong moral worldview with strong Christian content and very strong pro-American content. These positive qualities are spoiled by some light immoral content, including brief foul language and light references to French prostitutes.

(BBB, PPP, AP, CC, Pa, H, LL, VV, S, N, AA, D, M) Very strong moral worldview about brave American pilots during World War I includes a heroic protagonist who becomes a very moral character as the movie progresses, with very strong pro-American content though one black character says the French have treated him better than his own country, plus strong Christian content with positive references to God, the Bible and a heroic Christian character, some light immoral pagan content, and one cynical and hardened but brave and protective American pilot says he is not particularly religious but that he'll agree to participate in one religious ceremony if the Christian character wants to hold one; eight obscenities, one strong profanity and one light profanity, plus reference to man at urinal; lots of action violence with some blood includes World War I airplane dogfights with machine gun fire, explosions, bombs fall and explode, planes burn and crash, man gets arm cut off, and men given guns to shoot themselves before they burn to death in fiery planes or die in crashes; implied prostitution when unconscious pilot wakes up in house of prostitution and sees his friend with his arm around one of the girls, another pilot pulls up to the house in his car later in the movie, and brief romantic kissing but no bedroom scenes or sex scenes; no nudity, but prostitutes wear old-fashioned underwear; alcohol use and mild drunkenness in officers club; smoking; and, veteran pilot is obsessed with revenge and goes out alone to find the enemy, but he does it because he wants to save the lives of inexperienced pilots.

FLYBOYS is an excellent movie with traditional values. It’s an exciting, stirring, poignant, and impressive movie about the courageous American men who flew airplanes for the French in World War I. Known as the Lafayette Escadrille, these men became the first American heroes of the war long before the U.S. entered it.

Inspired by true-life stories from the war, the movie opens with several young men, for various personal reasons, leaving the USA to travel to France. The movie focuses on one of the men, Blaine Rawlings, a former Texas ranch owner played by James Franco. The group of young recruits, which includes a rich New England son of a demanding father, a man with a past from Wisconsin, an enthusiastic Christian, and a black boxer living in France, are placed under the wing of a cynical but dedicated and experienced pilot named Reed Cassidy, played by Martin Henderson. Their commanding officer is a French captain, played by the always reliable Jean Reno.

As the new recruits learn to fly and shoot at the same time, Blaine falls for a young French maid, Lucienne, who is taking care of her two orphaned nephews and niece. Through Lucienne, Blaine learns firsthand the disturbing costs of the war for the French civilians. Lucienne is afraid to give her heart to Blaine, because one day he may not come back alive.

The shockingly short life of World War I fighter pilots (three to six weeks) is reinforced with each new burial in the squadron’s cemetery. As the Germans gain ground, the chaos of war engulfs everyone and the missions grow increasingly dangerous. Thoughts of idealism and thrill-seeking take a back seat to staying alive and protecting one’s comrades and loved ones.

FLYBOYS is an old-fashioned war movie, but that makes it more accessible to a wider audience of families who don’t want to see movies with R-rated violence and sex. The movie’s old-fashioned quality is also in keeping with the history of World War I dogfights, which have been called “the last gentleman’s war.”

Director Tony Bill and Producer Dean Devlin have crafted a splendid portrayal of these “Knights of the Air” and their exploits. In fact, this is probably Tony Bill’s best movie since 1982’s MY BODYGUARD.

All the actors do a crackerjack job. James Franco as the main hero, Blaine Rawlings, turns in one of his finest performances. He plays a very strong, moral hero whose exploits can serve as a positive role model for teenagers and adults. Relative newcomers Martin Henderson, Jennifer Decker, David Ellison, and Abdul Salis bear watching in the future.

State-of-the-art special effects, coupled with some great stunt work on unseen helicopters, lend a majestic degree of reality to the whirling dogfights in the sky. One particularly exciting sequence finds Blaine trying to save the life of a downed comrade who’s trapped under a downed plane in No Man’s Land, the deadly zone between the German trenches and the Allied trenches. FLYBOYS brilliantly captures the eerie destruction and bizarre landscape of the infamous No Man’s Land, not to mention the soaring acrobatics of the planes in the air.

Best of all, FLYBOYS has a very strong moral worldview with strong Christian content and very strong pro-American, patriotic content. This is spoiled by some light immoral content. For example, FLYBOYS contains brief foul language. There are also some light and brief sexual references. For instance, two downed pilots find themselves rescued by several attractive women who turn out to be prostitutes. Only one of the pilots is shown enjoying his predicament. He’s seen with his arms around two of the girls. The other pilot has been knocked unconscious and wakes up in the women’s house of ill repute. Later, there is also a shot from the street of Cassidy entering a whorehouse and a light verbal, comical reference to his allegedly frequent visits there.

At one important point, Cassidy admits that he’s not a particularly religious man, but he also says that he’ll agree to participate in a religious ceremony that might be arranged by the strongest Christian among the pilots, a Bible-reading, hymn-singing pilot named Porter. Porter is played by Michael Jibson in another of the movie’s excellent performances. In another important scene, the French captain says, “God bless you.” Thus, the movie ultimately has a favorable attitude toward God and Christianity. Though it could be much stronger, this is still refreshing.

MOVIEGUIDE® encourages mature moviegoers to give FLYBOYS a try, especially if they’re looking for a rousing adventure yarn with plenty of romance, exciting special effects, and lots of positive, morally uplifting content. FLYBOYS is a wonderful, but sober, salute to the fighting men of the Lafayette Escadrille who risked their lives in a costly, misguided war that had few bright spots but many heroes.

“So it was that war in the air began. Men rode upon the whirlwind and slew and fell like archangels. The sky rained heroes upon the astonished earth.” – H.G. Wells