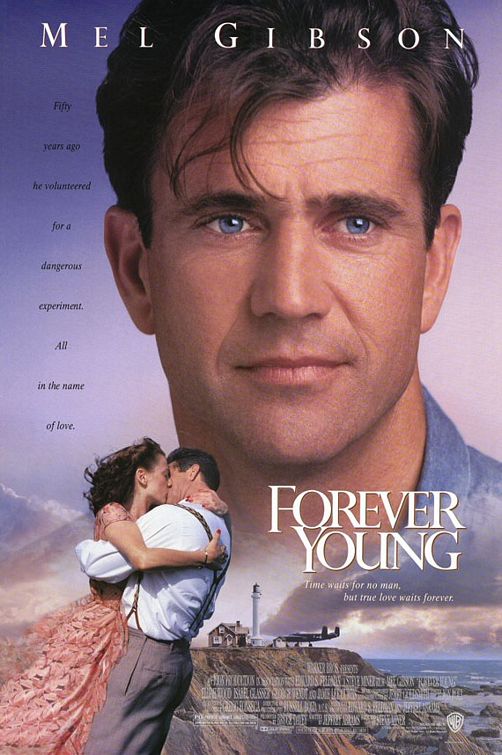 FOREVER YOUNG is a heart-warming movie a test pilot in the 1930s who volunteers to be cryogenically frozen when his true love goes into a coma. The movie contrasts the wholesome lifestyle of the 1930s with the selfish cynicism of the 1990s. The film has no sex, violence, or nudity, and a minimum of foul language. FOREVER YOUNG should be a hit--the upbeat, family romance of the 1992 Christmas season.

(B, L, V) Love, integrity and chastity triumph over all adversity in the delightful film marred only by roughly 3 obscenities, 3 mild profanities and very brief violence (a fist fight).

FOREVER YOUNG is a heart-warming movie about Danny, a test pilot in the 1930s. The film contrasts the chivalrous lifestyle of the 1930s with the selfish cynicism of the 1990s. As the movie opens, Danny’s friend, Harry, is conducting cryogenic experiments. Just when Danny wants to ask Helen to marry him, she gets hit by a car which leaves her comatose. Danny convinces Harry to “freeze” him until Helen awakens. 60 years later, in 1992, two young boys accidentally open Danny’s cryogenic vault. Danny wakes and tries to make his way in a world devoid of the Christian values of the earlier era. Many funny, heart-warming and tense moments follow as Danny tries to convince people he is who he says he is. Eventually, his records are found, and the chase is on as Danny tries to find Helen before the military turns him into an experiment.

FOREVER YOUNG is a wholesome movie with an exuberant ending where love triumphs over all adversity. The film has a believable plot, excellent acting and good pacing. Not only is there no sex, violence, or nudity, but also there is a minimum of foul language. Also, the film is loaded with positive values and emphasizes the importance of fidelity, chastity and manners. FOREVER YOUNG should be a hit–the upbeat, family romance of the 1992 Christmas season.