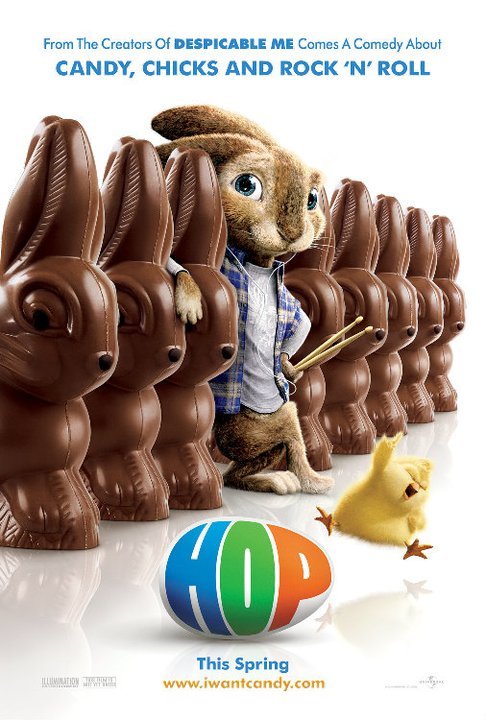 Combining live action with animated animals, HOP opens on Easter Island with the Easter Bunny preparing to pass the magical Easter egg wand to his son, E.B., who wants nothing to do with Easter but wants to become a rock drummer. Meanwhile, slacker Fred O’Hare’s family has an intervention because he won’t leave home and won’t get a job. His sister gets Fred a job interview at a computer game company and arranges for him to house sit a Beverly Hills mansion. Two weeks before Easter, E.B., the future Easter Bunny, escapes Easter Island through the rabbit hole and comes to Hollywood. Looking for a place to live, he gets hit by Fred’s car. E.B. takes advantage of Fred, who soon finds he as the world’s worst houseguest. Meanwhile, back on Easter Island, Carlos, the managing chick, is leading a coup against the Easter Bunny.

HOP is a high-octane children’s comedy with good moral lessons. There’s very little offensive content. The violence is mild and augmented by terrific writing. That said, there’s very little in HOP having anything to do with the real story of Easter, the resurrection of Jesus Christ.

(BB, C, L, V, M) Strong moral worldview with light redemptive elements about giving up on your dream to obey your father and do the right thing, but no overt reference to the reason for the season of Easter except for the name Easter itself, with a “Santafication” of the Easter Bunny myth about Easter; two light obscenities and some scatological jokes including bunny rabbit drops real jelly beans, which a woman eats; slapstick cartoon violence with animated characters and human hero slips, falls, gets knocked about, bunny rabbit gets hit by car but not hurt, but nothing malicious or extreme; no sex; no nudity; no alcohol; no smoking; and, bunny wants to follow his dream and become a drummer, young man doesn’t want to get a job or settle down and keeps making excuses, bunny trashes mansion.

HOP is a very funny movie, with some laugh-out-loud dialogue, that insightfully points out the problems in every family. That said, although its subject is Easter, it makes no reference to the reason for the season: Jesus Christ, who was resurrected on Easter. In fact, it has no spiritual elements whatsoever.

The movie opens with young Fred waking up in the middle of the night to see the Easter Bunny land in his back yard in an egg-type sleigh drawn by flying chicks. No one in his family believes him.

Cut to Easter Island 20 years later. The Easter Bunny is preparing to pass the magical Easter egg wand to his son, E.B., who wants nothing to do with Easter but wants to go to Hollywood and become a rock drummer.

Meanwhile, Fred’s family has an intervention because he won’t leave home and won’t get a job. The adopted daughter says they adopted her because Fred was such a disappointment. His other sister tries to help him out at a job interview with a computer game company and a house sitting opportunity at a Beverly Hills mansion.

Two weeks before Easter, E.B., the future Easter Bunny, escapes Easter Island through the rabbit hole and comes to Hollywood. Looking for a place to live, he gets hit by Fred’s car. E.B. takes advantage of Fred, and they develop a conflict-laden relationship as E.B. manipulates Fred into getting him into a talent tryout with David Hasselhoff. Meanwhile, E.B. causes Fred to wreck the interviews, wreck the mansion and wreck his sister’s Easter play. It is all very funny.

Back on Easter Island, Carlos, the managing chick, is leading a coup. So, like the SANTA CLAUSE movies with Tim Allen, HOP asks: “Will Easter come off this year?” “Will kids get their Easter baskets?” “Will Fred get a job?” “Will E.B. do what his father wants and become the official Easter Bunny?” The resolution to these questions seems impossible, which makes for a fun movie.

HOP is a high-octane children’s comedy. It is almost so intensely funny that it flattens out in spots. As Walt Disney said, every tear should be balanced with a laugh and vice versa.

Even so, this is one of the better children’s movies to come along in a long time. There’s very little objectionable material. The violence is mild, although augmented by good dialogue and good writing to heighten its impact. In fact, the writing is terrific.

James Marsden is very good in his role as Fred. The animated creatures are excellent. The skits are funny. And, even David Hasselhoff does a good job playing himself in his limited role.

Both Fred and E.B. are rebelling against their fathers and eventually realize themselves they should do the right thing. So, the movie has a strong moral core that parents will appreciate. There are many other positive moral statements in HOP. Cleanliness, punctuality, kindness, and all sorts of other virtues are affirmed.

That said, there’s very little in HOP that could be construed as having anything to do with the real story of Easter: the resurrection of Jesus Christ, who bore our sins on the cross and was resurrected victorious over sin and death to give us eternal salvation and life when we ask for forgiveness. With a real stretch, one could see E.B. as an incarnational figure, but the fact of the matter is, this tenuous connection is not strong enough. So, many in the faith community will be upset by the “Santafication” and commercialization of Easter in HOP. Others will enjoy the movie and use it as a platform to tell their children the real story of Easter.