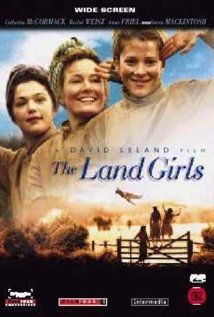 Attempting to be a moving romantic drama on war, love and loss, LAND GIRLS gives little insight into the "Land Girls' Army," the British women who joined the farms while their men went to fight with Germany in 1941. Instead, it offers lush production design while primarily providing caricatures of lusty women who chase the local farm boy.

Attempting to be a moving romantic drama on war, love and loss, LAND GIRLS gives little insight into the “Land Girls’ Army,” the British women who joined the farms while their men went to fight with Germany in 1941. Instead, it offers lush production design while primarily providing caricatures of lusty women who chase the local farm boy.

Three promising British young women play the leads, Agatha (Rachel Weisz), Stella (Catherine McCormack) and Prudence (Anna Friel). They arrive at the Lawrence farm, ready to work as bombs blast in the distance. The owner of the farm, Mr. Lawrence (Tom Georgeson), is a cantankerous, inhospitable host who doubts that the girls can perform on the farm. He hired them because his son Joe (Steven Mackintosh) will be leaving for the front soon.

All of the girls instantly become smitten with Joe, especially Prudence. While Agatha and Stella milk cows, Prudence flags Joe down for a literal romp in the hay. They try to fornicate, but Mr. Lawrence enters the barn and spoils their plans. Later that night, Prudence climbs into Joe’s bed where they finish what they started. Agatha is so excited by Joe’s lasciviousness, that she asks him for a go. Initially, Joe says no, disgusted that he has a reputation as “easy,” but later he tells her he has reconsidered and they also fornicate. Meanwhile, though Stella is actually engaged to a charming commander, she too holds romantic thoughts about Joe.

At a dance in town, Agatha meets a Canadian officer. They dance, fall in love, and he asks her to wait for him. Prudence dances with as many boys as she can, and Stella waits patiently for Joe to ask her to dance. Then, in an unexplained jump of events, Prudence marries a man who was never introduced in the movie, and he is sent off to war and killed in action. The girls console Prudence in one of the movie’s only emotionally true scenes.

Stella meets her fiancee, and they get a room to fornicate, but Stella can’t do it. She is in love with Joe. Later, when her fiancee is sent off to war, his legs are blown off. Stella goes to visit him to tell him that she wants to call the wedding off, but when she sees him stricken, she has compassion on him and can’t leave him. Meanwhile, Joe waits at the train station every day for a week, waiting for Stella to return. The movie concludes with the war ending, Agatha marrying her Canadian man, and Stella and Joe having an uncertain future.

Last year, PARADISE ROAD featured a cast of female leads facing and overcoming the pain of war, nobly with music and prayers. In LAND GIRLS, the war seems almost incidental, and the first half of the movie is literally a sex farce, a game of who can “land” the farm boy. While each girl has her own personality, their dimensions are rather shallow. Stella seems to show some depth, but her character is never fully explored, and, when she develops an attraction for Joe, it seems contrived and unmotivated. This is especially true when she tries to hold the moral ground, and she knows that he has already been with the other two women sexually. At least, the women don’t try to say their behavior is right, and in fact call it fornication in the movie, but this brazenness further separates them from the audience’s sympathy. Besides the blatant and dull sexual aspect of this movie, it also suffers from jumps and leaps of logic, glossing over many of the more important parts.

How does Prudence meet her man? What does she see in him? How does the “Land Girls” Army form? Who leads the Army? What motivates the three leads in the movie to join? What else do the Land Girls do besides farm? These are questions left unanswered in this fragmented drama.

LAND GIRLS does show the women attending church, praying and seeking God, but their lust for Joe negates their Christian faith. Mrs. Lawrence is seen as a true believer, holding perhaps the most genuine faith. The only really commendable part of this movie is the art direction. Costumes and décor ring very true of the early war period in England. With beautiful English countryside, it is regrettable that the physically attractive women don’t hold an inner beauty as well. This movie is being marketed as a showcase for three rising British actresses. All hold promise, and Catherine McCormack has already proven herself with BRAVEHEART. Yet, despite the allure and sophistication of doing a period piece, LAND GIRLS is not the great vehicle for showcasing the pain of war, the joy of love and the call to duty that it should have been.